AT THE RECENT congress of the far-right Slovak National Party (SNS), unchallenged leader Ján Slota was re-confirmed in the top party post and, immediately following his triumph, made headlines by appealing to all Slovak political parties not to cooperate with the opposition Hungarian Coalition Party (SMK). 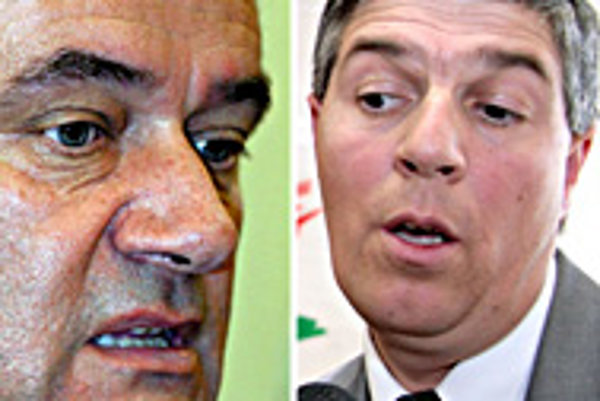 Font size:A-|A+  Comments disabled
AT THE RECENT congress of the far-right Slovak National Party (SNS), unchallenged leader Ján Slota was re-confirmed in the top party post and, immediately following his triumph, made headlines by appealing to all Slovak political parties not to cooperate with the opposition Hungarian Coalition Party (SMK).

According to Slota, Slovak political parties should not cooperate with the SMK until the ethnic Hungarian party distances itself from foreign extremists, particularly those in Hungary, who aim to undermine the validity of the post-war territorial divisions of Central Europe that were enacted through the 1920 Treaty of Trianon and the Beneš Decrees of the 1940s.

The Beneš Decrees, named after exiled Czechoslovak President Eduard Beneš, were drawn up after the Second World War. Through the decrees, many ethnic Hungarians and Germans were stripped of their land and property and expelled from the former Czechoslovakia due to their alleged collaboration with the Nazis.

Meanwhile, the Treaty of Trianon was signed after the First World War and stripped Hungary of two-thirds of its former territory, including the land that is now Slovakia. Out of Imperial Hungary's population of 18 million, only 7.6 million remained within Hungary's new borders.

Slota said that SMK politicians should prove their loyalty to Slovakia and officially reject calls to revise these historical documents.

"Let them distance themselves and show that they are loyal citizens of the Slovak Republic," he said.

Slota's rallying cry drew no support from other Slovak parties, even those he cooperates with in the ruling coalition. The Movement for a Democratic Slovakia (HZDS), for instance, rejected the SNS challenge along with the parties of the parliamentary opposition.

On the other hand, Prime Minister Robert Fico did not respond to the SNS proposal, just as he has ignored other controversial statements by Slota in the past.

According to SMK Chairman Béla Bugár, by not reacting to Slota's call, Fico is virtually "following in his footsteps".

"This will not help people's perception of Slovakia's foreign policy," Bugár said at a press conference on October 21.

But according to political analyst Pavel Haulík, Fico had no option but to remain silent about Slota's latest statement if he wanted to keep his coalition government together.

"If he [Fico] wants to keep the government united, it's best to decline to comment," Haulík said.

According to the analyst, Slota was probably speaking "under the influence of his triumphant victory at the SNS congress".

However, Haulík added that Slota had evidently misread the political landscape if he thought his statement would win him supporters. "The times when such rallying cries might have garnered support are long over. Not even the SNS can score points on this agenda," he said.

"Slota will be Slota, the SNS will be the SNS, and the SMK will be the SMK. The situation is far less dramatic than it sounds, because by now such calls are largely ignored by both the political parties as well as the Slovak public."

A recent poll carried out by Haulík's Agentúra MVK polling agency showed that 62 percent of respondents believed that relations between Slovakia and Hungary have worsened over the past few months. However, only 11 percent believed that Slota's statements were the main cause of the tension between Slovaks and Hungarians. Representatives of the ruling parties, as well as their voters, laid the blame elsewhere.

According to HZDS MP Ján Kovarčík, the reason for the increase in tension is the fact that the SMK is not a member of the ruling coalition. This opinion is shared by around 35 percent of HZDS and SNS voters. Overall, 16.9 percent of respondents in the poll agreed that this is the main reason for the worsened Slovak-Hungarian relations.

Some 10.1 percent of respondents said that the case of Hedviga Malinová, the alleged victim of an ethnic attack in Nitra on August 25, had contributed to the situation, while only 8.8 percent believed that it was caused by the presence of the SNS in the new Slovak government.

According to Haulík, political parties in Slovakia should realize that scoring political points with an anti-Hungarian agenda is becoming a tired and increasingly less effective strategy.

Nevertheless, statements similar to Slota's continue to hurt the ruling coalition and Slovakia's image in the international arena.

On October 12, Fico's Smer party was suspended for 10 months from the Party of European Socialists (PES) for forming a coalition with the SNS. Slota's infamous anti-Hungarian and anti-Roma statements from the past made him a xenophobic extremist in the eyes of the western social democrats.

HZDS leader Vladimír Mečiar, who along with Slota and Fico is one of three members of the government's senior political body, the Coalition Council, even suggested that Slota resign as SNS chairman as a way of calming tensions.

On the TV talk show 'Na Telo', Mečiar said on October 23 that "I proposed this as an idea because it is not a question of the acceptance of the SNS as a whole but rather the acceptance of one person. So I asked whether that person might not want to step down".

When asked by journalists later, however, Slota said he did not remember Mečiar proposing anything of the kind, and that he was certainly not planning to resign from the leadership of the SNS.