AS EXPECTED, the STV Council last week failed to elect a new director for the public station. Despite the fact that the three second-round candidates received even fewer total votes from the 15-member council than they had in the first round, government officials said the stalemate had nothing to do with the fact that the ruling coalition has not decided what it wants to do with the country's public media. 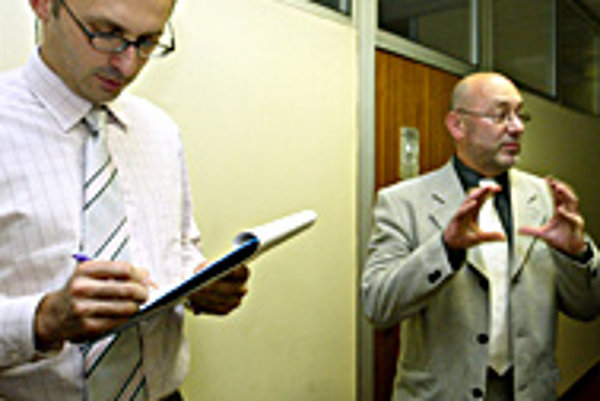 Font size:A-|A+  Comments disabled
AS EXPECTED, the STV Council last week failed to elect a new director for the public station. Despite the fact that the three second-round candidates received even fewer total votes from the 15-member council than they had in the first round, government officials said the stalemate had nothing to do with the fact that the ruling coalition has not decided what it wants to do with the country's public media.

Deputy Culture Minister Ivan Sečík admitted in an interview with The Slovak Spectator that the ministry did not yet have a clear public media strategy, but said the issue had been neglected by previous governments, and that his ministry was acting.

"We have created a [nine-member] commission that should address a whole range of media problems. Some of these are issues that several generations of Culture Ministry officials have worked on," he said.

One aim the government clearly has in mind is to return public programming to a more clearly defined public service mission, and give it the money it needs to survive.

"Today we are fighting to preserve the dual model [public/private] of financing," said Dušan Jarjabek, an MP for the ruling Smer party and a former head of the parliamentary Media Committee until 1998. "I would like to return to public institutions the feeling of performing a certain public service in the public interest."

For Ján Budaj, the head of the parliamentary Media Committee from 1994 to 1998, public media must be financially independent before they can start to perform a truly public service: "STV always was economically dependent [on the government], and it is today as well, at the very least because it has inherited debts that it is incapable of repaying by itself. Not to mention the public radio."

Sečík said that the media commission would address these and other issues, and deliver a report by March next year. "We are considering, and this is in the government program as well, creating a contract between public media and parliament, in which the basic functions of public service would be defined. The contract would also spell out how public media are to be financed.

"We have also just about finished work on the draft amendment to the Concessionary Fees Act as the main source of financing for public media, which will enter the legislative process next month. Apart from that we also want to decide what to do with the buildings they [STV and Slovak Radio] are located in, both of which are larger than they need."

For Budaj, however, the committee is a smokescreen concealing the ministry's real intentions. "The current minister, unlike his predecessors, is very well versed in STV's problems, but so far he is just giving hints and letting the public get used to certain ideas. One of these hints, and it's one he is dropping so obviously that it's clear he intends to do it, is to merge the public media into one institution."

Sečík admitted that the committee was studying the merger option, but said that it was not seriously on the cards. "At this point we don't see a merger as an answer to the problems of public media. We haven't yet defined a merger as a goal. We'll have to wait and see, and we're working on several options."

Given the government's pronouncements on the media so far, however, the merger proposal has caused the most debate, and led to accusations that it is designed to give the government tighter control over public media as a whole.

Political scientist Grigorij Mesežnikov said that such fears were supported by the government's overall approach to journalists, and by the fact that PM Robert Fico himself had recently called the STV editor-in-chief to complain about the station's coverage.

"The whole debate on public media seems to be sliding from the professional level more to the political," he said. "We have heard such [merger] proposals before, but more in a professional context.

Since elections, when we have already seen certain attempts by the executive to bully the media, it occurs to one that such a merger could help increase the power of a single political party [Smer] over the public media."

But Sečík denied any such aim, saying that the ministry was on the contrary trying to ensure the public media had the greatest possible independence from politics (see interview, this page).

Jarjabek, for his part, said he didn't think the institutions could be merged into one within a single four-year election term. "We first need a wide debate on the matter, in which we say what we want to achieve," he said.