NOVEMBER has become a Lucullan feast for photography fans in the Slovak capital, as exhibitions usually flood a variety of institutions. This year is no exception, with 36 exhibitions arriving for the 16th Month of Photography. 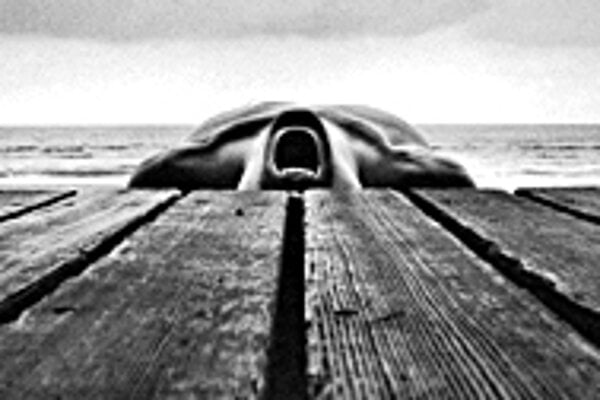 Font size:A-|A+0
NOVEMBER has become a Lucullan feast for photography fans in the Slovak capital, as exhibitions usually flood a variety of institutions. This year is no exception, with 36 exhibitions arriving for the 16th Month of Photography.

"The 16th year of the festival is proceeding along the lines of what it has done before: mapping out photography in Central and Eastern Europe," said Václav Macek, director of the Month of Photography, which is organized by Central European House of Photography (SEDF).

Firstly, organizers have decided to expand the scope of the festival beyond Central and Eastern Europe.

"This year it will be the Far East, more specifically China and Korea. For next year, we're planning Latin America," Macek said.

The second is that the Slovak photo festival has become part of the European Month of Photography.

"A network of seven festivals has been formed for the first time," Macek said.

The Mutations display began its tour across Europe in Luxembourg on October 14. It then moved to Paris, and on November 3, will open in the exhibition premises on the western terrace of Bratislava Castle. Slovakia will be represented by the young Slovak photographer Marek Kvetan.

Accompanying the festival this year will be a conference, a competition for the best photography book published in Central and Eastern Europe in 2005-2006, a concert and a portfolio review, among other events.

Eighty-five photographers have enrolled so far in this year's portfolio review, which is up from last year's enrollment of 70, thereby confirming photography's popularity in Slovakia.

"Interest in photography here doesn't look to be slowing down any time soon," Macek said.

Macek partly attributes the public's growing interest to new digital technologies that enable even amateur photographers to accomplish what only professionals could have done in dark rooms 20 years ago.

"My impression from recent years is that the interest in photography results from a lack of interest in contemporary visual arts," Macek said, emphasizing that photography is more communicative to the public.

Of the huge list of exhibitions, Macek highlights Finnish-American photographer Arno Rafael Minkkinen, who devoted himself to one topic - his body and country - for 30 years. His suggestive and original works make him one of the key figures in 20th century photography. His exhibition Saga will open in the House of Arts at SNP Square 12 on November 2.

The New Documentalists exhibition, which will open in the Slovak National Museum at Žižkova 16 on November 3, will showcase works by young Polish photographers, who reject artistic convention. Their work is ironic and subversive, by violating all the principles of what is "good" documentary photography.

Within the Far East section, Macek pointed out the China display by Edward Burtynsky, which takes place in the House of Arts at SNP Square 12 as of November 2. This Canadian photographer shows the impact of modern civilization's effectiveness and production, i.e. western market principles on traditional Chinese culture.

André Kertész (1894-1985) in the City Gallery of Bratislava at Panská 19 shows the lesser known sides of this American photographer of Hungarian origin. The exhibition will present his earlier works, which he took before leaving Hungary for abroad and becoming famous.

Other exhibitions include Czech photographer Jiří David's pictures of his teenage son and Slovak Jana Ilková's series of women with their daughters. The Other Side of the Soul presents Cuban photography from the last five years as a combination of magic and banality. Dutch artist Hannes Wallraffen is devoted to the Márquezian theme of Macondo. Jewels of Russian Photography is a unique presentation mapping Russian photography from 1850 and 1950.

During the Month of Photography, the sittcomm.award will be given to a photographer under 35 years old from the Visegard Four countries - the Czech Republic, Hungary, Poland and Slovakia. The award was conceived of by young photography professionals looking to support other young artists and promote a wider distribution of their work.

"The main initiative behind this comes from the young Slovak documentary photographer Lucia Nimcová," Macek said.

Nimcová is a unique personality for dedicating her energy to 'serving' other photographers rather than just focusing on her own work.

Photo workshops have become an inseparable part of the festival. This year, people can attend the Hidden Images workshop led by Miro Švolík between November 3 and 5. Kamil Varga will help photographers to uncover the Geometry of the Human Body between November 9-12. And between November 16-19, the attendees of the Contrasts of Bratislava workshop, led by prominent documentary photographer Andrej Bán, will explore the disparity of wealth in Bratislava.

For more information on the exhibitions and opening hours, visit www.sedf.sk.