IF THE management of the Slovak National Theatre (SND) asked those who attended its recent premiere of Cavalleria Rusticana/Pagliacci (Cav/Pag) to part with a comment on the production, mine would be this: don't let Ondrej Lenárd or Blanka Juhaňáková out of your sights. 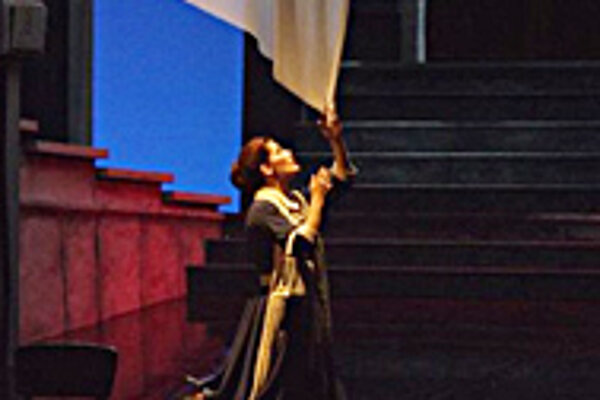 IF THE management of the Slovak National Theatre (SND) asked those who attended its recent premiere of Cavalleria Rusticana/Pagliacci (Cav/Pag) to part with a comment on the production, mine would be this: don't let Ondrej Lenárd or Blanka Juhaňáková out of your sights.

That's because, after months of timidity and lethargy, the SND orchestra finally sounded exuberant. Maestro Lenárd's piercing baton picked out crisp triplets that snapped with precision and gusto inside melodies as languid and picturesque as a stroll through the sun-drenched Sicilian countryside. The players had obviously been well-rehearsed in how to depict Cav's idyllic setting seething with tempestuousness, and they were loving every minute of it.

Part of what made the effect so impressive was the subtlety with which the maestro was able to extract the requisite expressiveness. Stereotypical arm-swings and bounces were replaced with a simple slight of hand, as though Maestro Lenárd were a magician who needed only tap his magic hat to conjure up measures of ardent music.

Add to that a chorus that was energized and involved after also languishing in the doldrums. As choir director, Mrs. Juhaňáková clearly awoke the ensemble's innate sense of drama, and built a rounder, more resonant sound quality. Hopefully, this means the days of bored French villagers in Carmen and indifferent English townspeople in Peter Grimes are gone for good.

A response to the French Naturalism of Émile Zola, which applied Darwinian theory to literature, verismo (literally "realism") in Italian opera aimed to present a slice-of-life portrait of the working class. Because its main exponents in Italian literature, Giuseppi Varga and Luigi Capuana, were both from Sicily, the typical verismo story and characters were rooted in southern culture and language.

Musically, verismo broke ground by incorporating the sobs and laughs its characters felt into the music of the opera.

As Konrad Claude Dryden writes in his insightful article, Vocal Aspects of Italian Verismo, "vocalism was now geared to make an immediate impression thanks to its dramatic impact. Phrasing suddenly gained more importance than entire arias. ... High notes were not always required to be stunningly beautiful or to crown a specific scene - on the contrary - they were now employed to serve as an additional means of expression, be that joy, sadness or sheer hysteria."

The SND's production of Cavalleria Rusticana understood this principle well. Set on Easter Day in a Sicilian village around the 1890s, the young soldier Turiddu sings about his love for Lola, who married the wealthy businessman Alfio while he was away. Though now with Santuzza, Turiddu continues his relationship with Lola, which tears him apart. Enraged at his unfaithfulness, Santuzza reveals the affair to Alfio, who challenges Turiddu to a duel. Moments later, a villager stumbles onto the town plaza to announce Turiddu has been killed.

Michal Lehotský (Turridu) delivered another splendid performance, with plenty of his typical vocal fluidity and agility. But, as an actor, he was fidgety, which distracted from the drama, and caused some of his scenes to fall flat.

This was especially true during the scene in which Turridu and Santuzza argue, and he strikes her. Mr. Lehotský should've stood still and let the audience be drawn in, but instead started pacing and rubbing his hands together, as if he was in a rush. It didn't make sense.

Jolana Fogašová (Santuzza) was also excellent. Her dusky resonance carried her story throughout the theatre, and her portrayal of Santuzza as a woman in turmoil was tremendously sympathetic. As she hugged Turiddu's legs and cried for him to leave Lola, we cried with her.

Much of the same can be said for the evening's other premiere, Pagliacci. Perhaps the most recognized verismo opera - mostly for its aria Vesti la giubba, which the great tenor Plácido Domingo entered into popular culture - Pag is based on a true story the composer's father presided over as a judge.

Also set in southern Italy, around the 1860s, Canio is the leader of a travelling theatrical road show that includes Nedda, his wife; Tonio, a hunchback desperately seeking Nedda's affection; and Beppe. A local man, Silvio, is Nedda's lover.

Zoltán Vongrey's stentorian sound provided a powerful Tonio, whose prologue introduces the concept of the opera, and verismo, with the words "theatre and life are not separate." As someone who tries to seduce Nedda, then betrays her for rejecting him, Tonio can easily be written off as detestable, but Mr. Vongrey's interpretation gave the character dimension and humanity.

Bulgarian tenor Kostadin Andreev was a charming Canio. Despite an audible lisp, his lines were fluid and effective. His performance of Vesti la giubba, in which Canio expresses his heartbreak over his wife's infidelity, would've benefited from even more abandon, but still communicated deeply.

And to express Canio's despair throughout Pag's second part, Mr. Andreev took to making leaping bows that were full of such comedic self pity. It was a wonderful detail.

Adriana Kohútková's performance as Nedda anchored the opera with a column of sound that spun and swirled sweet legato. Nedda is willing to die for her freedom. We see this when she refuses to reveal her lover's name, even after her husband threatens her with a knife, which he eventually plunges into her.

As with Mr. Lehotský, some of Ms. Kohútková's dramatic moments rang false, but overall, she gave off the image of a pillar of strength.

The opera's final words are "the comedy is over".