Opposition adapts to life after power

THE RESIGNATION of Deputy Agriculture Minister Marian Záhumenský over an apparent conflict of interest at the end of October was significant not only in its own right, but also for a less obvious reason - it was the first time the political opposition had closed ranks and worked together since the June 17 elections that toppled the government they formed in 2002 from power. 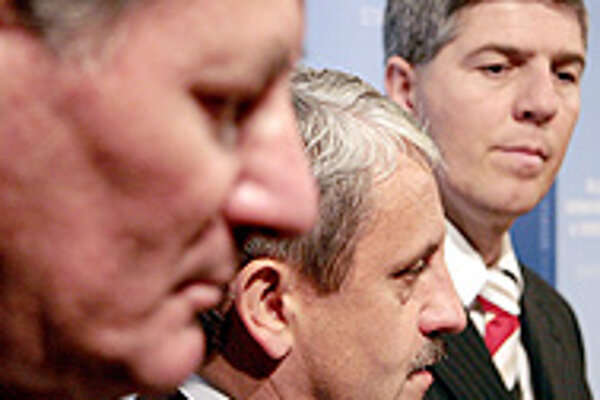 Font size:A-|A+  Comments disabled
THE RESIGNATION of Deputy Agriculture Minister Marian Záhumenský over an apparent conflict of interest at the end of October was significant not only in its own right, but also for a less obvious reason - it was the first time the political opposition had closed ranks and worked together since the June 17 elections that toppled the government they formed in 2002 from power.

Former Prime Minister Mikuláš Dzurinda, the head of the opposition Slovak Democratic and Christian Union (SDKÚ) party, joined forces with Christian Democrats (KDH) leader Pavol Hrušovský and former Agriculture Minister Zsolt Simon of the Hungarian Coalition Party (SMK) to berate the government for stalling in what they referred to as "a textbook case" of clientelism (see story, this page).

The united condemnations came less than two weeks after the leaders of the three parties had met for the first time since elections and agreed to work together.

However, even in their joint approach towards Záhumenský, there were elements of the same discord that has left such a vacuum on the opposition benches of the legislature over the past four months.

Once again, when PM Fico attacked the ethnic Hungarian SMK for its role in toppling Záhumenský, the other opposition parties did not come to its aid.

"Simply put, the SMK is producing one piece of filth after another, because it can't come to terms with the fact that it is not a member of the ruling coalition," Fico said after Simon revealed that Záhumenský had scripted a subsidies rule change giving a firm he owned Sk4.4 million more in aid this year.

SMK Chairman Béla Bugár said that the prime minister was once again attacking the country's ethnic Hungarian political representation to score points with nationalist voters: "the way Fico is attacking the SMK shows that he is a nationalist," he said, adding that Fico's Smer party contained a strong nationalist wing that was increasing tensions in Slovakia's multiethnic society.

"It could lead to Hungarians being seen as people who are fighting against Slovakia, who are not friends of the Slovak nation, which of course is not true. The problem is that if you create such an environment, it is then irrelevant whether it is true or not," Bugár said.

While a conflict of interest managed to get the opposition together, the far more serious matter of ethnic relations under the Fico government has not produced a united front.

Hrušovský said of the Fico government's program statement that "I noticed several problems regarding the sensitive relationship of the majority nation with ethnic minorities, but beyond that, the SMK received no support from its former government partners.

For political scientist Miroslav Kusý, the opposition seems lost and unable to find its feet, even on issues which defined their coalition governments over the past eight years.

"The Slovak opposition is still fragmented," he said. "They can't find a role that suits them as an opposition. They can't find a way to do opposition politics. What they've done so far has sometimes been contradictory. For example, they criticize Robert Fico for not fulfilling his pre-election promises, even though if he had it would have brought him into conflict with many of the reforms these parties did when in government, and which won praise in Europe."

SDKÚ and KDH politicians have failed on repeated occasions to come to the defense of the SMK since elections, such as over the alleged beating of ethnic Hungarian student Hedviga Malinová in Nitra on August 25, or the various verbal attacks on the party by government officials like far-right nationalist leader Ján Slota.

Kusý said the accusations against the SMK for being somehow anti-Slovak had reawoken a level of anti-Hungarian sentiment in the country that had not been seen in the last eight years under successive Dzurinda governments.

"We had already gotten rid of such ethnic problems," he told The Slovak Spectator. "Now, I'm again starting to get anonymous nationalist hate mail. After eight years, I had forgotten about it."

The Malinová case, in which police said the student had invented her story, and are now considering investigating her on charges of spreading public alarm, was a missed opportunity for the opposition parties to show solidarity with the SMK, Kusý said.

"This was exactly the moment at which the opposition as a whole should have got involved and said: "Whatever happened with Malinová, the SMK is our partner". But both the KDH and the SDKÚ left the Hungarians to their own devices, and when [the government] started to do politics on the basis of attacks on Hungarians, they just looked on from afar at all the concentrated fire, and watched the SMK drown. Neither the KDH nor the SDKÚ stood up for them."

Now has the SMK been the only opposition party left to fight its battles unaided. During the fifth parliamentary motion by the KDH to cancel amnesties issued in 1998 by then-acting president Vladimír Mečiar, the SMK and SDKÚ voted with their opposition partner, but did not take part in the debate that preceded it, leaving the KDH to cross swords alone with an irate Mečiar and his government supporters.

Dzurinda told The Slovak Spectator that his party had not seen any point in taking part (see interview, page 2), but political observers noted that the SDKÚ and Dzurinda himself continue to hold out hope of forming a coalition with the HZDS and the other two opposition parties, and thus are unwilling to antagonize Mečiar.

Dzurinda, as he himself admitted, "was maybe the first and the only one after elections to say there is a much better alternative for Slovakia than the cynicism and clientelism we are currently seeing". However, the SDKÚ's plan of recruiting Mečiar's HZDS ran aground on another example of opposition disunity, the refusal of the KDH to countenance such a liaison.

Dzurinda's vision of a future coalition of the SDKÚ, SMK and KDH with the HZDS received new life recently from an unexpected opposition source - KDH founder Ján Čarnogurský, who returned to politics in October with his election to the party's presidium.

In an interview with the Pravda daily on October 28, Čarnogurský said that Mečiar, rejected by the international community for his authoritarian excesses while Slovak leader in the 1990s, had patched up his reputation abroad, and was now a suitable coalition partner for the KDH. He also criticized the party's leadership for having rejected the possibility after elections, and allowing Fico to form a government with Mečiar and Slota.

"If a coalition between the right wing and the HZDS had been formed, we would already have been able to adopt a Treaty on Objections of Conscience, whose rejection was the reason we left the previous government," he said. "And we still haven't managed to secure the cancellation of those amnesties, even though we are not partners with the HZDS."

Dzurinda welcomed the change in approach. "I'm glad that Ján Čarnogurský is in favour of this alternative," he said.

However, Čarnogurský's words were not received as well by his party colleagues Vladimír Palko and Martin Fronc, both of whom said it would only be possible to consider coalition cooperation with the HZDS if Mečiar withdrew his amnesties and allowed the kidnapping of the former president's son in 1996 to be investigated.

KDH Pavol Hrušovský also rejected the possibility of coalition cooperation with the HZDS in an interview with The Slovak Spectator: "At this point I see no reason for the main topic of party debate to become whether the KDH should change its policy towards cooperation with parliamentary parties. We had this discussion before parliamentary elections."

Perhaps a greater problem for the opposition than its momentary disunity is the impression its members, especially Dzurinda, have given of a desire to return to power at any cost, rather than to work out a way to be effective in opposition.

In his victorious struggle with Mečiar ahead of the 1998 elections, Dzurinda built his platform on absolute rejection of Mečiar and his policies, which had nearly led Slovakia into international isolation.

As late as October 2005, Dzurinda was telling the TA3 TV station that: "Citizens can be sure of one thing, and that is that I will never be in the same government as Mr Mečiar. That is clear to me. It will always be about responsibility towards citizens."

Following the 18 percent it scored in elections, Dzurinda's SDKÚ has tumbled to 11 percent in the most recent polls, while Fico's Smeru has risen from 29 percent in June to 43 percent.

But Hrušovský, for one, believes the opposition will recover from its current disorientation, and that it was to be expected the parties would need time to recover after so many years in power.

"We're at the beginning of the election term," he said. "Every party is taking a while to come around, because it's a change in style and content. Maybe we also were all looking for our individual role in opposition, and not finding enough room to do politics together. Especially in matters affecting the state's interest and damage to Slovakia's good name abroad."