FOLLOWING a press briefing on October 31, at which he delivered his opposition SDKÚ party's response to the resignation of Deputy Agriculture Minister Marin Záhumenský over an apparent conflict of interest (see story on page 1), former Prime Minister Mikuláš Dzurinda gave an interview to The Slovak Spectator in which he said that, despite appearances, the opposition was united and was working together. 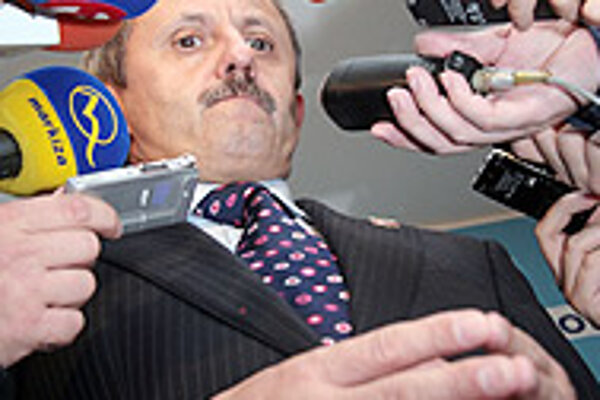 Font size:A-|A+  Comments disabled
FOLLOWING a press briefing on October 31, at which he delivered his opposition SDKÚ party's response to the resignation of Deputy Agriculture Minister Marin Záhumenský over an apparent conflict of interest (see story on page 1), former Prime Minister Mikuláš Dzurinda gave an interview to The Slovak Spectator in which he said that, despite appearances, the opposition was united and was working together.

The Slovak Spectator (TSS): How do you regard the fact that Deputy Agriculture Minister Marian Záhumenský resigned on his own?

Mikuláš Dzurinda (MD):It is disquieting not only that [Prime Minister] Robert Fico wasn't able to tell the truth and admit that he had to fire Záhumenský, but also that he didn't have the strength to fire even a mere deputy minister, or even condemn his behaviour. I've no doubt there is more to this than meets the eye.

TSS: And what do you think that might be?

MD: Maybe he was afraid that Záhumenský would become an independent MP. I'm only quoting Robert Fico's argument here, when he said that he had drawn his ministers mostly from people who weren't MPs, in order to avoid creating a caucus of independent MPs. But that's only a guess.

Myself, I chose ministers on the basis of completely different criteria. I didn't consider whether a minister or deputy minister would at some point become disobedient and refuse to support the government program.

TSS: In the end, Záhumenský resigned. Isn't that a positive development?

MD: And you believe that he resigned?

TSS: Whether or not he resigned, or as you suggest was pushed out by Robert Fico, he will no longer be a deputy minister. That means the opposition got what it wanted.

MD: I don't understand where you are going with this question. I've told you everything. Robert Fico is a person who has two opposite tendencies. On the one hand he makes bold statements, arguments and threats, while on the other he shows absolute weakness in action. There is a very strong contrast between the two. I'm sure you remember on [October 27] how he was waving around that letter from the European Commissioner [for agriculture] and claiming that the scandal was over and that Záhumenský would remain deputy agriculture minister. Then, a short time later, he is dropping Záhumenský from his function.

TSS: In the case of Záhumenský, the opposition came together as one, and all parties were in favour of his resigning. In many other cases, however, the opposition is not as united, such as against the anti- Hungarian attitude in society, on which the SDKÚ did not react at all. Nor did the party react in the case of [the alleged beating of ethnic Hungarian student [Hedviga] Malinová.

MD: In my opinion, the way you put it in your question is not how it was at all. Look at the voting patterns in parliament, such as on tax bills and some initiatives by the [opposition Christian Democrats] KDH or [the opposition Hungarian Coalition Party] SMK. Look at tax sovereignty, for example. On all of these issues we found agreement.

TSS: What about Hedviga Malinová, and the anti-Hungarian attitude in Slovakia?

MD: I was the first member of the opposition to visit the attorney general and the president of the police corps. I made sure that the police and prosecutors were acting, but I can't take their place. It would be good if both the opposition and the coalition respected this. Where will we end up if all of us suddenly start acting like [the judge on an Italian TV show about the mafia] Catani? Where would it lead this country?

TSS: This case is a little reminiscent of the kidnapping of the former president's son [Michal Kováč Jr in 1995]. Back then, the police and the government claimed all sorts of things, such as that Kováč Jr kidnapped himself. It was only under pressure from the media and the political opposition, of which you were then part, that things moved in the right direction.

MD:I've answered you the best way I know how. We are a member of the European Union and NATO. In terms of the level of our democracy, we are no worse than any other country in the European theatre. We have standard, European institutions in this country, and we need to give them room to work. I personally - personally, I repeat - checked up on them to make sure that the organs that were supposed to act were in fact doing so. Let's let them act. I can't say it any clearer.

TSS: Do you think that the opposition is less fragmented than political analysts and the media believe?

MD: I don't believe it is [fragmented]. What does the word fragmented mean? It's too vague and undefinable, and it depends on the disposition of each one of us. I think the opposite is true. Recently we began to cooperate more closely. A few days ago, we met for the first time formally and officially. We agreed to meet regularly. For the first time, we are also going to organize a memorial to November 17 [the date of the 1989 revolution]. We will also meet whenever it is necessary. I don't understand questions like the one you asked. I regard it as insincere.

TSS: Another example of disunity among the opposition was when the KDH recently again proposed in parliament that the amnesties [issued by then-acting president Vladimír Mečiar in 1998] be abolished by a Constitutional Law. The SDKÚ supported their abolition, but did not take part in the debate. Why?

MD: If we don't take part in a debate, it is because we have the feeling that there is no point. Parliament was voting for the fifth time on abolishing the Mečiar amnesties, and it's becoming a little counter-productive.

TSS: Wasn't your reluctance to take part due to the fact that you want to create a coalition with [Mečiar's ruling Movement for a Democratic Slovakia] HZDS? You recently applauded the statement of [KDH founder] Ján Čarnogurský, who said the KDH should not have rejected the HZDS.

MD: You're jumping from topic to topic. My answer is - no. It wasn't because of that. If it was because of that, we never would have supported a Constitutional Law abolishing the amnesties. You're on absolutely the wrong track.