A beating that never took place, but refuses to go away

TWO MONTHS after she claimed to have been beaten up in Nitra by a pair of men for speaking Hungarian, the case of student Hedviga Malinová remains as full of unanswered questions as when police first shelved it after a two week investigation, saying it never happened. 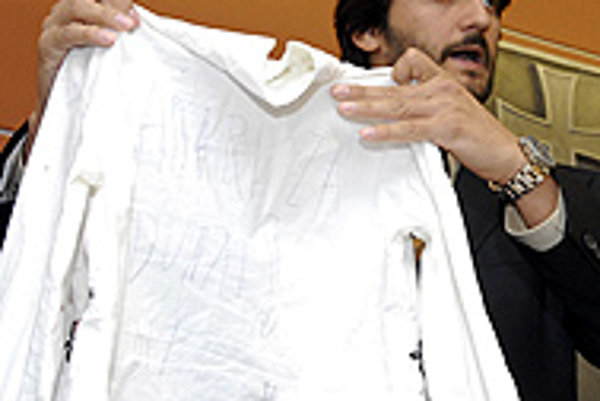 Font size:A-|A+  Comments disabled
TWO MONTHS after she claimed to have been beaten up in Nitra by a pair of men for speaking Hungarian, the case of student Hedviga Malinová remains as full of unanswered questions as when police first shelved it after a two week investigation, saying it never happened.

The STV public television channel aired a report on October 23 alleging that Slovak politicians, in public statements refuting Malinová's claim that she was attacked, cited 'proof' not contained in the police evidence file, which the station had access to.

The findings, which also confirm that Malinová indeed suffered injuries, are likely not enough to cause Attorney General Dobroslav Trnka to reopen the investigation, or even to back down from his threat to charge Malinová with spreading public alarm.

However, it bears an eerie similarity to infamous criminal cases from the 1990s, when the government of Vladimír Mečiar also contended that the crimes had never occured.

Five days after the August 1995 kidnapping of Michal Kováč Jr, for example, then-PM Vladimír Mečiar appeared on STV to cast doubt on whether the son of the former president had actually been violently abducted.

"So far, we can say there was no blood in the car," he said. "We can also prove that no one was transported in the trunk." Only later did a Vienna court rule that "there is reason to believe that Michal Kováč, Jr lost his freedom and was forcibly abducted to Austria by a Slovak state organ", which the court suspected was Mečiar's secret service.

As the investigation continued, Mečiar claimed that Kováč, Jr had "kidnapped himself" by staging the event, a version that was repeated by police officials and witnesses brought forth by the VTV television station, as well as public TV.

Again, only a few hours after a car bomb killed Róbert Remiáš, the best friend of the crown witness in the Kováč, Jr kidnapping case, in April 1996, the police began to deny that a murder had taken place, saying the car had exploded due to a technical flaw. The TASR state news agency reported that "according to preliminary investigations, the explosion could have been caused by a fault in the propane-butane system".

This claim was repeated as an incontrovertible fact by the police brass at the time, and continues to be argued by members of Mečiar's HZDS party, despite the fact that the Criminal Forensics Institute in its final report on the matter ruled out a technical malfunction: "The reason the car caught on fire was that explosives near the gas tank blew up. It is almost impossible for such a fuel system to malfunction in such a way without outside intervention."

While Slovakia's police force and political establishment have matured greatly since the mid-1990s, the case of Hedviga Malinová, who reported that she was attacked on August 25 at the height of recent tensions between Slovakia and Hungary, bears some similarities to these earlier cases.

After the media carried photos of her swollen face, Interior Minister Robert Kaliňák made it a priority to get to the bottom of the case. In only two weeks, however, he announced that the investigation had been shelved because police had concluded that Hedviga Malinová was lying and had not been beaten up.

Malinová continued to claim she had been beaten up, and hired a lawyer to challenge the police decision. However, the Nitra regional prosecutor's office turned her down.

Did the minister break the law?

Legal experts pointed to the fact that Minister Kaliňák, who is not a member of any criminal justice organ, revealed facts from the Malinová case file to the public even before the plaintiff had been informed her case had been shelved.

On September 12, Kaliňák said at a press conference that "I wish to announce that yesterday the investigator halted proceedings in this case because it is beyond a doubt that the incident did not occur."

Jozef Šátek, the former head of the serious crimes investigation bureau, wrote in the Sme daily on October 26 that "Kaliňák violated Paragraph 6 of the Criminal Code by informing the public of a criminal proceeding".

Interior Ministry spokesman Erik Tomáš denied to The Slovak Spectator that Kaliňák had broken the law, saying that "the interior minister was just pleased that the Slovak police managed to thoroughly and clearly solve a case that was sensitive from the international point of view".

He also said that the law allows ministry officials to keep informed on the progress of investigations to an extent approved by investigators.

"Above all, we think it was appropriate that the interior minister made an appearance in such a sensitive case that had implications beyond Slovakia's borders."

But Šátek rejected this explanation: "The seriousness of the violation of this rule was all the greater because it was committed by a constitutional official at a time before a decision in the case had been taken, and with massive publicity. The minister also gave out the information before the plaintiff had even received the police decision, which violated her right to mount an equal and simultaneous public defense."

Political scientist Miroslav Kusý, who is also the former head of the Slovak Human Rights Centre, also believes Malinová's rights as a plaintiff were violated. "The police in this case made a whole string of mistakes, and they closed it very sloppily. From the beginning, including the fact that 250 police were assigned to the case, it looked as if they were doing everything they could not to find the truth but to catch Malinová in a lie."

Finally, a few days after the Nitra prosecutor rejected Malinová's appeal of the police decision not to continue with the investigation, the Plus Sedem Dní weekly and STV reported that Kaliňák's claims in dismissing Malinová as a liar in many instances had not been based on information contained in the investigation file.

For one thing, Kaliňák claimed that Malinová had not had any evident injuries. "Medical appraisals do not agree with the student's testimony," he said. "The police believe that she only wiped blood that was dripping from her nose all over her face. She apparently gets frequent nose bleeds due to nervousness."

According to STV, however, the case file contains medical reports confirming the bruises and contusions visible in the photographs of Malinová taken shortly after the alleged incident. Among the injuries that doctors recorded were bruises to her abdomen, face and both thighs (Malinová claimed to have been thrown to the ground and kicked). The reports also say she had a swollen nose and lower lip, dried blood on her ears from where her earrings had apparently been ripped out, and a mild concussion.

Malinová also told the police that the youths had beaten her up after hearing her talking in Hungarian, but said she couldn't remember whether she had been speaking on her mobile phone or to someone in person. Kaliňák, however, ignored this detail on September 12: "It was confirmed by the mobile operator that there were no calls to or from her phone that day. That means it is beyond a doubt that plaintiff Hedviga could not have been talking on the phone."

Finally, Kaliňák said that Malinová had lied when she said that the youths stole her wallet after the attack and later returned her documents in the mail, because she had sent the package herself. The minister said that the police had discovered this according to DNA tests, which had shown that Malinová had sealed the envelope and fixed the stamp with her own saliva: "DNA profiles were found on the sticky part of the envelope that came from saliva, in other words from sealing the envelope."

However, according to the media investigations, the case file did not say the DNA on the envelope had come from saliva.

Malinová later said that she had carried the envelope around for several days after getting her possessions back, and that the DNA traces could have come from her hands or from her purse.

Police made no mistakes

Spokesman Tomáš said the inconsistencies raised by the media had been explained, but he did not say how, claiming only that: "The report was made by a journalist of whom Hedviga's boyfriend said in the media that "this guy is doing it the way we want". We regard the questions raised as secondary from the point of view of the investigation, and easily explainable. The important thing is that they do not cast doubt on the conclusions of the police, which were upheld by the prosecutor."

Malinová's lawyer, Roman Kvasnica, refused to comment on the case for The Slovak Spectator, saying he was under increasing pressure, and omitting to say whether Malinová would appeal to the Attorney General to intervene.

Attorney General Trnka, for his part, has already expressed a lack of sympathy for Malinová's case, threatening to charge her with misleading the police. "There are various ways that this could be finished, and one of them is to put her in front of a court," he said.