AT THE BEGINNING of this year, the Slovak postal market was getting ready for complete liberalisation as of January 2007, an ambitious date that would have put it ahead of many other EU countries. However, an ongoing debate over how to compensate the universal postal service provider, Slovenská Pošta, for any losses due to the step, has caused the date to be pushed back to 2009, if not later. 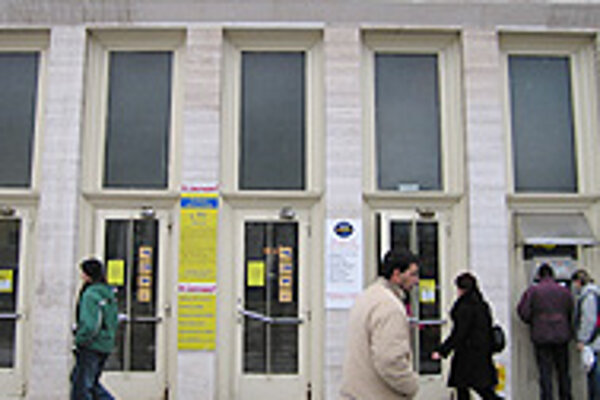 Font size:A-|A+  Comments disabled
AT THE BEGINNING of this year, the Slovak postal market was getting ready for complete liberalisation as of January 2007, an ambitious date that would have put it ahead of many other EU countries. However, an ongoing debate over how to compensate the universal postal service provider, Slovenská Pošta, for any losses due to the step, has caused the date to be pushed back to 2009, if not later.

At the beginning of October, the European Commission approved a proposal to fully liberalize the European postal service market and open it up to competition starting in 2009. The EC said that mail delivery companies should not have a legal monopoly on any type of delivery service.

The EC expects that, with the complete opening of the market in 2009, citizens can look forward to more innovation, improved services, and better value for their money from their stodgy state-run postal monopolies. Individual EU governments and the European Parliament must back the commission's proposal if it is to become law.

But Slovak Post officials say it is unclear how liberalisation would work in practice, and that these uncertainties must be cleared up before any progress can be made.

"Up to now, it hasn't been clear how universal postal service, which the state is committed to ensuring, will be financed. The Slovak government wanted to settle the issue through a contract between the state and Slovenská Pošta on the provision of services that are in the public interest. However, [this] was not accepted by the European Commission, because they considered it to be state aid," Slovenská Pošta spokesperson Bela Lisáková told The Slovak Spectator.

Postal services in Slovakia have been in a gradual liberalisation process since 2002. In the last four years, the weight of packages that Slovenská Pošta has the exclusive right to deliver has fallen from 2 kilograms to the current 50 grams.

Full liberalisation would require removing Slovenská Pošta's exclusive rights on 50-gram deliveries and deciding who, and under what conditions, is going to provide Slovakia's universal postal service. The universal postal service provider has to ensure certain quality and delivery conditions at affordable prices on every working day of the year, and across the whole country.

"As far as the postal market is concerned, after the cancellation of postal exclusivity, a balanced regulatory framework must be set up that will support competition but at the same time ensure quality universal services," said Telecom and Post Ministry spokesperson Dalia Šaškovičová.

Telecom and Post Minister Ľubomír Vážny recently said he had no objection to the liberalization of the postal market, and that he wanted Slovakia to fulfil the EU directives.

However, Vážny said, "liberalization should be done gradually so that it doesn't hurt too much. As a result of liberalization, Slovenská Pošta's sales will fall from the current Sk8 billion to Sk2 billion within two year's time, and that its 17,000 employees will be reduced to 3,000."

The Postal Regulatory Bureau, which sets and monitors the quality of the universal postal service, welcomes the postponement of the liberalisation from the original January 2007 date.

"The postponement of the cabinet's decision on the full liberalisation of the postal service market will give us the time we need [to ensure the smooth operation of the universal postal service]," said Pavel Ďugel, the vice-chairmen of the bureau.

How liberalisation affects the Slovak market will depend on what kind of regulation is left in place, and how much the universal postal service provider earns from the trade.

Among those countries that have already liberalised their services, Finland has reported no negative impact. However, Finnish liberalisation was somewhat cosmetic, the Slovak ministry said, because the conditions for providing the universal postal service were so demanding that only Finnish Post was able to fulfil them.

On the other hand, Estonia, which used to have a fully liberalised postal market, took a step backwards this year by again granting the national operator exclusive rights on deliveries of up to 50 grams.

Sweden, where postal exclusivity was abolished more than 10 years ago, has specific geographic conditions that affect competition, and therefore the national postal operator has not experienced a decrease in postal deliveries.

However, if ministry employees and Slovenská Pošta are happy to see the January 2007 deadline pushed back, the would-be competition is dissastisfied.

Companies providing delivery services in Slovakia say that potential losses for the universal postal service should not be used as an excuse for postponing liberalisation.

"Liberalisation will benefit everyone - both the senders and the recipients of deliveries. Everybody can look forward to savings and increased quality of services. Evidence from markets that have already been fully liberalised shows this. This also applies to providers of universal postal services," Maroš Hornáček, the director of TNT Post Slovensko, told The Slovak Spectator.

According to Hornáček, Slovakia now seems to have moved from the group of pro-liberalisation countries to a group whose governments intend to protect the domestic postal operator's monopoly as long as possible.

"In countries all around Slovakia, with the exception of Poland, the market for deliveries up to 50 grams is being liberalised. Slovenská Pošta is showing record profits, and this is why it is naturally not interested in its monopoly being limited in favour of a free market and competition. And at the same time, the [current] government needs to fill the state's coffers," he said.

Slovenská Pošta reported revenues of around Sk4.2 billion in the first six months of this year, while costs were around Sk3.7 billion. Its before-tax profit came to about Sk551 million.

Hornáček said TNT Post Slovensko is already providing close to a universal postal service. "Our company currently delivers two or three times a week, including weekends, which is close to the level of service of a universal postal provider. Our goal is to extend our distribution network to cover 95 percent of households in Slovakia."

TNT Post Slovensko is interested in penetrating market segments that are served exclusively by Slovenská Pošta at the moment. Hornáček added that his company is surely not the only one interested.

"Austrian Post is knocking at the door and we will see what advances the Germans [Deutsche Post Worldnet] and the French [La Post] make. Besides these, local players trying to take their first steps are also appearing on the market. The sooner the market is liberalised, the sooner Slovenská Pošta will face competition."

"Slovenská Pošta has a significant position as a universal postal service provider. It is recording solid profits, and during the last few years it has improved its services. I don't think any of its competitors in Slovakia would be able to cover the whole country with the current volume of deliveries for a comparable price [to Slovenská Pošta] - no one else has the infrastructure or the customer base here. There is no company in Slovakia besides Slovenská Pošta that would be able to make a profit by providing universal postal services," Svitok said.

However, Svitok also said there might be smaller companies on the market that would be interested in penetrating segments currently under postal exclusivity.

"There might be local players who might not even cover a whole city, but I personally don't think they would be a significant threat to Slovenská Pošta's position as universal postal service provider."

Slovenská Pošta's Lisáková noted that the company is already facing significant competition, except on deliveries weighing less than 50 grams. Nineteen different postal companies, some operating nationwide and others on a regional basis, are currently registered with the Postal Regulatory Bureau.

"Based on the cabinet's program, Slovakia will be subject to the EU's new postal legislation. The response of national postal companies in the EU shows that it will not be that easy to fully open the postal market as of January 2009. The majority of them admit that competition has positive effects, but at the same time they are afraid of the negative impact that full liberalisation can have on the universal postal service."

Nonetheless, Lisáková said that Slovenská Pošta is preparing for liberalisation by focusing on its corporate customers and the quality of its postal services. "Slovenská Pošta wants to maintain its dominant position on the domestic market despite increasing competition and the limiting of exclusivity," she said.