AS DIRECTOR of the Professional Development Center in Bratislava, Jaymes Regualos sensed that Slovakia could benefit from a program that gives young people a fun, hands-on way of testing their perseverance while learning about business. 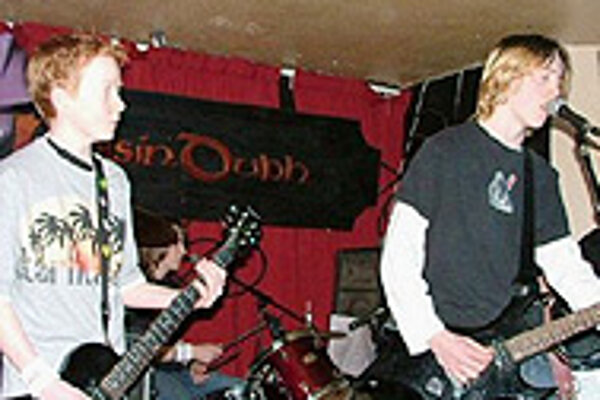 Font size:A-|A+  Comments disabled
AS DIRECTOR of the Professional Development Center in Bratislava, Jaymes Regualos sensed that Slovakia could benefit from a program that gives young people a fun, hands-on way of testing their perseverance while learning about business.

So he persuaded the executives of the Blastbeat Challenge - an international, non-partisan, non-religious music program for secondary school students that started in Ireland three years ago and has spread around the globe - to bring the program to Slovakia.

"There was some concern that the Slovak market was too small," Mr. Regualos told The Slovak Spectator, "but I'm convinced Slovakia's EU status, proximity to Vienna and population size make it an ideal testing ground."

In the Blastbeat Challenge, groups of secondary school students set up Mini Music Companies (MMC's) that promote bands from their region.

All the bands and music are original, and all the work is done outside school hours.

"Blastbeat chose music as a means through which to build creative problem solving because music's something most teenagers find fun and interesting," Mr. Regualos said.

Each MMC has a minimum of five members - a CEO, an HR manager, a product manager, a marketing manager, and a finance manager - who, over the course of a year, are tasked with creating the most successful music company possible.

But in the context of the Blastbeat Challenge, "best" means earning the most points, not money. The MMC's earn points by advertising their bands, selecting an appropriate concert venue, planning and marketing the concert, in which several of the regional bands compete for top honors, and selling tickets and CD's.

"Because it's not about money," Mr. Regualos said, "it becomes about planning, following through with those plans, teamwork and meeting objectives - in essence, striving to achieve your personal best."

To find MMC's, Blastbeat will advertise for hosts - schools, churches or companies that can put together at least one MMC and match it with an Adult Facilitator.

The Facilitator doesn't need prior experience running a business, but should have authority over the kids and really care that they perform well.

The host will also have the final say on how any money the MMC's do raise should be disbursed. Options include letting the MMC keep it, investing it back into the host institution, or using it to fund future teams.

As a program that promotes social as well as individual responsibility, Blastbeat recommends that at least part of any money raised be donated to a worthy cause, and encourages this by twinning secondary schools in the West with ones in the Third World.

"Blastbeat subscribes to the belief that the attainment of the UN Millennium Goals is essential to the long-term survival of civilization, and is a moral and human imperative," The Blastbeat Mission Statement reads. "For the Northern Hemisphere, or First World, to survive and prosper, it must realize that it is in its own interests to ensure the good development of the Third World, or Southern Hemisphere, as to fail will inevitably lead to human misery and conflict."

Once the MMC's have members and facilitators, Blastbeat provides support in the form of marketing strategies and tips on how to develop a simple business plan before setting them to work promoting their bands.

The most successful bands and MMC's are invited to a nationwide "Battle of the Bands" at the end of the year. The top MMC will be chosen based on final standing of points and final presentation and the winning band will receive a recording contract.

The Professional Development Center sees the Blastbeat Challenge as an extremely effective tool for implementing the goals of the Lisbon Strategy, which call on the European Union to develop "the most dynamic and competitive knowledge-based economy in the world" by 2010.

"The kids will be learning how to be innovative and resourceful, and how to solve problems through independent work," Mr. Regualos said. "If they don't take it seriously, and are lazy, their company could fail, and Blastbeat will let that happen.

Failure is an important learning tool, which is an idea I think is not expressed often enough in Slovakia."

But Mr. Regualos has an unshakeable faith in the dedication young people can demonstrate when faced with finding creative solutions in a context they enjoy.

"I met one sixteen-year-old from abroad," he recalled, "who was the CEO of an MMC that included about twenty-five of his friends. The friends became lazy, so he warned them to get serious, but they didn't, so he fired them. I asked him if they were still his friends after that and he said 'Yes. They knew I fired them because they were lazy and weren't taking the program seriously.'

"I couldn't believe what I was hearing. I asked this kid: 'And how old did you say you were?'"

Also set to launch is Prax, a Professional Development Center program in which university students build leadership, communication and entrepreneurial skills by setting up and running their own businesses.

But unlike Blastbeat, participants of Prax must try to design an organizational structure and marketing scheme in an attempt to attract investors, who buy a real stake in the student company's future.

"Know-what, or knowledge about facts, is nowadays diminishing in relevance," the New Zealand Ministry of Economic Development writes. "Know-where and know-when are becoming increasingly important in a flexible and dynamic economy, [as well as] know-how."

"Creative solutions and practical application of knowledge are essential skills that both programs are designed to supplement," he said, "so the initial year of Blastbeat and Prax might be challenging, because it's about teaching young people to create opportunity, rather than just wait for it.

"And once future groups see people their age working hard and becoming successful, they'll be inspired to do the same."

Registration for the Blastbeat Challenge and Prax is under way until the end of January. For more information, visit www.blastbeat.sk and www.prax.eu.sk or contact office@blastbeat.sk and office@Prax.eu.sk.