Bratislava readies for clash of the titans

THERE WAS a time in Slovakia when the prospect of municipal elections would evoke a collective yawn. But that was before a public sector reform gave Slovakia's regions, towns and villages 94 percent of all personal income taxes collected in the country, as well as significant clout over schools, roads and health care. 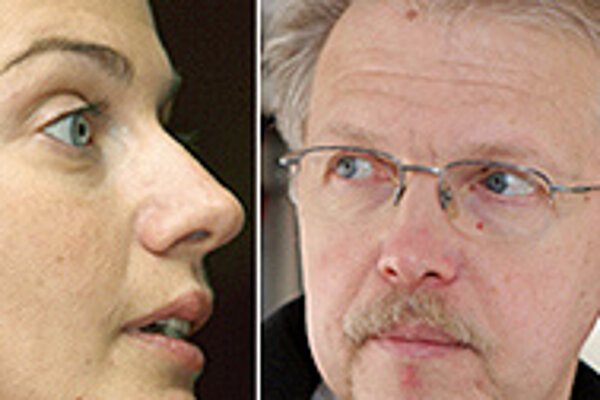 Font size:A-|A+  Comments disabled
THERE WAS a time in Slovakia when the prospect of municipal elections would evoke a collective yawn. But that was before a public sector reform gave Slovakia's regions, towns and villages 94 percent of all personal income taxes collected in the country, as well as significant clout over schools, roads and health care.

In 2007, municipal governments are slated to receive Sk87 billion, or about 28 percent of the overall revenues of the central state budget.

Not surprisingly, this time around, municipal races ahead of elections on December 2 are anything but boring, especially in larger urban centres with larger budgets and a rising tide of communal problems.

In this, the first instalment of a three-part series leading up to the vote, The Slovak Spectator presents the top two candidates in Bratislava - incumbent Andrej Ďurkovský, who is running for his second term as the candidate of the right-wing SDKÚ and KDH parties, and Monika Flašíková-Beňová, currently a Member of the European Parliament for the ruling Smer party.

As usual in Slovak municipal politics, Flašíková-Beňová has attracted the support of some unlikely bedfellows, such as the ruling coalition HZDS party of former PM Vladimír Mečiar, and the opposition ethnic Hungarian SMK, which has been strongly critical of Smer and the HZDS since they formed a new national government in July.

But in Slovak municipal politics, anything goes, and The Slovak Spectator offered both candidates a chance to put the gloves on and exchange a few blows.

The first question we asked each candidate was how they rated Ďurkovský's performance as mayor. Monika Flašíková-Beňová {MFB}, the personable former owner of the Koliba radio station in Bratislava, faulted Ďurkovský for spending too much time and energy on Bratislava's Old Town, and ignoring the rest of the city.

"I don't think Mr Ďurkovský grasped the difference between the mayor of a city and the head of a city district," she began. "It's as if he didn't really understand what was involved in being the mayor of Slovakia's capital city. He has remained a district boss, and most of his activities have centred on the Old Town, where he used to be head of council. He never became the mayor of all 17 city districts. And when I read a report on the fulfillment of his programs and priorities for the 2004 to 2006 period, I'm sorry to say that most of those priorities concerned repairs to roads and building signal equipment."

But Andrej Ďurkovský, a more reserved candidate than his opponent, said that Flašíková-Beňová's criticism flew in the face of the international acclaim the Slovak capital had won. "What this city is and what state it is in is the result of the concerted efforts not only of the mayor, but also of a whole range of people. We managed to get the city recognized on an international scale, and we received many compliments. Along with London, Munich and Berlin we were hailed on many occasions as a city of the future. And it's no accident that we are receiving such evaluations. Our marketing of the city is top-notch, for all that the marketing of Slovakia itself leaves something to be desired. In Strasbourg the Strasbourg Club has been founded, which includes Bratislava. We founded an office in Brussels and held an open days event, at which Bratislava attracted great interest. Thanks to our foreign cooperation with Vienna we managed to open many projects, such as the Twin City Liner [hydrofoil] providing high-speed travel on the Danube River between Bratislava and Vienna. We laid the foundations of a new Central European Region that we christened Centrop. We want Bratislava to become the headquarters of the project, and I managed to convince my colleagues from Hungary, Vienna and Brno to support this idea. That's incredibly significant."

Since Slovakia joined the European Union in 2004, the pace of construction and land development in the capital has become frenetic. Ground has been broken on two multi-billion crown multi-use complexes on the waterfront, while office buildings around the city are racing to open in order to avoid coming to market in a glut of space - 100,000 square meters is due to be opened before the end of 2008. The building boom is challenging city planners to keep order.

"Bratislava lacks a vision," claimed Flašíková-Beňová. "What kind of city will it be in 20 years? I spend a lot of time abroad, so I know that Bratislava is relatively unknown, just like Slovakia. Moreover, as a city Bratislava has become terribly distant from its inhabitants. People don't identify with the city as all, and our vocabulary has lost the term "Bratislavčan". People have complained to me that no one cares what they want Bratislava to be like."

"I would appreciate it if Mrs Flašíková-Beňová could replace all of those abstract sentences with concrete ideas," Ďurkovský fired back. "Bratislava already has clear priorities and clear ideas of what it will look like. The city should grow to a maximum size of 750,000 residents, and will have a maximum unemployment rate of 2 percent. Bratislava is the natural administrative, cultural and social, and above all economic hub of the country, and is at the same level as other European cities. We also spelled out our vision for the next 30-40 years in the form of 69 concrete points that we have already begun to fulfill. I stress that our vision is based on building a knowledge economy. I attach the highest possible importance to this point. To this end we plan to build a technology park on the outskirts of Bratislava towards Vajnory that will provide several thousand hi-tech jobs."

As to be expected in city this size, challengers in the Bratislava mayoral elections have hinted darkly at budget improprieties, although none have supplied concrete evidence of wrongdoing.

"It looks like City Hall has a major problem with the municipal transit company, which is in financial trouble," said Flašíková-Beňová. "It appears there is something not right with the financial flows there - the company receives an enormous amount of money, but still has financial problems. I also don't think as many buses were bought as was claimed. The company also employs 3,500 people, only 930 of whom are drivers. What do the others do? I don't think the company is managed well."

However, Ďurkovský hit back at Flašíková-Beňová's well-known weakness for fancy cars - her latest jalopy is a Porsche.

"I'd like to ask Mrs Flašíková-Beňová when she last rode on city transit, or if she even knows what a bus looks like," the mayor said. "We have bought plenty of new buses, including 22 using the most modern natural gas propulsion system, CNG, which we use in Petržalka. They cost over Sk200 million. We also bought some duo-buses, which are basically trolley buses that can also use classic propulsion systems in addition to an electric current. We modernized old vehicles and moved 120 of them to CNG. We want to build a streetcar line to Petržalka and thereby link Slovakia's largest suburb, with 100,000 people, to the Bratislava transit system. Finally, about two years ago we had a renowned international firm do an audit of the transit company. They found no problems; quite the contrary."

Transport, which most mayoral candidates agree is the city's No 1 problem, continued to exercise our respondents, with Flašíková-Beňová switching her attack to Bratislava's heralded - but absent - subway system.

"The Metro company is a strange phenomenon," she began. "Since it was founded, Sk2.5 billion has been invested in this company. Apart from approving decisions to build something, nothing has happened, and somewhere along the way Sk600 million crowns went missing. Let's not make fools of people - where is the Sk600 million? Not to mention the fact that the new Apollo Bridge was overpriced, and during its construction a whole range of non-transparent acts took place. Today the bridge is a burden to Bratislava, because the city had to take a very high loan to build it."

Again, Ďurkovský explained the facts behind the mystery: "The Metro company was founded to build a subway, but given that we are talking about an investment of Sk120-130 billion, this project is currently impossible to realize or even imagine. Metro was thus used to build the Apollo Bridge, which was opened to the public in 2005. It was financed with Sk1.8 billion that the previous government approved in direct financing, plus Sk1.8 billion that we borrowed from the European Investment Bank. This loan is covered by the state. In other words, we needed Sk3.6 billion to build the bridge. During the project it became clear that we would have to find an extra Sk400 million to cover some parts of the project, such as the renovation of Miletičová Street, widening Prístavná Street, Košická and so on. The city decided to use Metro's finances for this purpose."

Flašíková-Beňová attacked Ďurkovský for being under the thumb of real estate developers like J&T, which is building the River Park complex below the castle.

"It looks to me as if Mr Ďurkovský came under pressure from certain developer companies and investors," she said. "The only thing he really has to show for himself today is the very thing that people regard as one of the greatest problems. Before elections in 2002 he said that he would never allow the buildings to be constructed on the banks of the Danube that he has gone ahead and approved, and that are now being built."

Ďurkovský again accused his opponent of not knowing the facts. "Mrs Flašíková-Beňová doesn't know which zones can be built in and which can't. What I guaranteed and continue to guarantee is that there will be no building on the promenade between the Karloveský arms of the Danube and the Apollo Bridge. That was the goal, and that is part of the project that was submitted and that is being carried out. We saved the promenade. Everyone will be able to walk there with no problem."

The candidates ended their pre-election wrangle with a tussle over Ďurkovský's failure to get Bratislava's new master plan, which says what can be built where, through city council. The current plan was written in 1976, and real estate sector sources suspect that city politicians prefer the current state of affairs, as it gives them power to issue "exceptions" for individual projects, and thus opens opportunities for graft.

"Mr Ďurkovský failed over four years to push through two important documents that he himself said were priorities - the Act on Bratislava, and the Bratislava master plan. Even though he had a majority on city council, he didn't get them through. Given that he is running for the same coalition, I can't imagine how he wants to pass them in the next term."

"I fulfilled my role as mayor," Ďurkovský countered. We prepared a draft Act on Bratislava and submitted a master plan, which was about nine years in the making. But now we have said that we will continue to debate these measures after elections."