The Nov. 17 revolution - then and now

SEVENTEEN years ago on November 17, the totalitarian system in the former Czechoslovakia began to fall apart. Although the brutal interference of the police with students demonstrating on Václavské Náměstí in Prague led to violence, calm prevailed, and history remembers the occasion as a peaceful transition. Hence the poetic name: the Velvet Revolution. 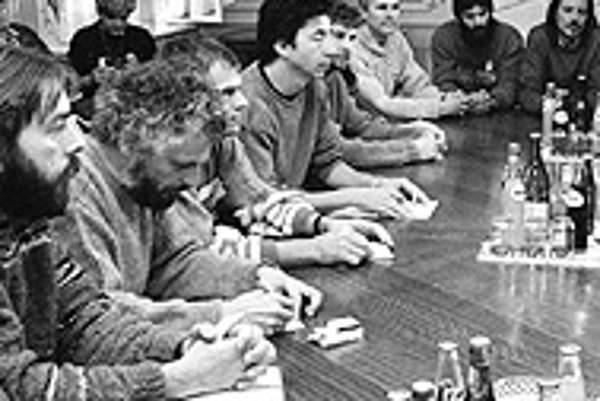 Font size:A-|A+  Comments disabled
SEVENTEEN years ago on November 17, the totalitarian system in the former Czechoslovakia began to fall apart. Although the brutal interference of the police with students demonstrating on Václavské Náměstí in Prague led to violence, calm prevailed, and history remembers the occasion as a peaceful transition. Hence the poetic name: the Velvet Revolution.

Professor Soňa Szomolányi, head of the department of political science at Comenius University, witnessed the events of 1989 in Bratislava and described them for The Slovak Spectator.

On November 9 that year, the East German politburo opened the border crossing through the Berlin Wall, thereby signalling the end of the isolation of the countries of Central and Eastern Europe.

After the fall of the Berlin Wall, Szomolányi recalled, a group of Slovak friends gathered in Bratislava on November 18 to consider what to do next. Unlike in Hungary or the Czech lands, nothing was happening in Slovakia. Sixteen people met in the living room of Szomolányi's flat for a home seminar, which was quite common at the time. Among those who took part were Fedor Gál, Ján Budaj and Martin Bútora - men who went on to lead the events of November in the weeks ahead.

On the same day, there was another meeting at the home of writer Ivan Kadlečík in Central Slovakia including Peter Zajac and a group of ethnic Hungarian intellectuals who felt that something had to be done in Slovakia as well.

"Suddenly, at around 10 pm, my 15-year-old daughter came in and told us what she'd heard on Radio Free Europe," Szomolányi said. "They announced that a student named Martin Šmída had been killed in Prague. Later it turned out that although the police beat the students up pretty brutally, they didn't actually kill anyone. But that's how we came to know about the demonstration in Prague."

The same people and others gathered the next day at the Umelecká Beseda [Artistic Colloquium, above today's Umelka Pub] on Dostojevského Street and established the Public Against Violence (Verejnosť Proti Násiliu, VPN) movement. From that moment on, the VPN started to organise demonstrations against the regime, and after the abdication of the government and the cancellation of the lead role of the Communist Party, the VPN came to the fore of political events.

Szomolányi said that Slovakia in November 1989 had the great advantage of still being a part of Czechoslovakia after the fall of the totalitarian system. Given that Prague preferred a parliamentary democracy, she said, that's what Slovakia got as well, despite calls for a presidential system with more centralized powers.

"It was really convenient for us that the first phase of democratic changes occurred within the federation, and that the same institutional bases of the democratic system were formed here as in the Czech part of the country. It helped democratic stability in the initial period, which was very important."

Szomolányi worked for the VPN as a consultant and an advisor, and later shepherded the movement's evolution into a political party. She also co-authored the program of the newly founded party.

She said the firm beginnings of democracy in Slovakia shielded the country from later attempts to subvert it.

"Although the 1994-1998 Vladimír Mečiar government tried to turn back the clock on the development of democracy [by abusing the secret service and suppressing political and civic opposition], it didn't succeed," she said.

Many people who stood on the squares of Slovak cities and shook their keys to toll the knell of the totalitarian regime feel nostalgia for those days, for a time when they believed everything they had wished for was about to come true. Their hopes were expressed in a wish voiced by Václav Havel, the leader of the Czechoslovak Velvet Revolution and the future Czech president: That love and truth would conquer lies and hatred.

"At the beginning of the revolution they talked about love and truth defeating lies and hatred. That's over now, because we're no longer fighting for our lives or for our existence, for the basic nature of the state. Now, everyone's a pragmatist in politics."

Sociologist Fedor Gál, who was the leader of the Public Against Violence, told The Slovak Spectator that the early revolutionary slogans, while inspiring, had been naive. "After all those years, I consider Václav Havel's statement about truth and love overcoming lies and hatred as the first populist statement I heard after 1989 from the mouth of a real politician.

"Truth and love will never win over lies and hatred, they will only engage them in a never-ending fight. That is because good and bad don't exist in pure form in real life. They are mixed together in people, communities, and societies.

"I'm not saying that Havel is a populist, just that a certain amount of populism always accompanies politics. However, the populism of people like Mečiar or [nationalist leader Ján] Slota is different from that of Václav Havel. Havel's [populism] awakens positive emotions in people, like hope or motivation. Slota appeals to our impulses and negative emotions.

"But the truth about November 89 is that the positive energy from this historical event evaporated very quickly. Now we live in a "standard" world. I'm happy that I lived to see this world, and that I can defend my idea of truth and love in it."

Szomolányi also regards the change in atmosphere in Slovakia as a natural development: "What happened in Slovakia was similar to what happens elsewhere in such historical reversals. In the first phase, the elite comes forward with goals and a vision of a better society. It presents these ideas to a society, which needs a change. This is also a period of unrealistic expectations and intense emotions, which is why it can't last long. The period of disappointment or post-revolutionary depression that set in during 1990 was also natural.

"However, today we live in a time of normal politics. Fortunately, we fight over taxes and not over democratic principles. Even the battle over the nature of the regime between 1994 and 1998 is happily over. Today we can say that we have a more or less consolidated democracy."