Creating IT staff from scratch

THE IT field is one of the fastest developing industries and is also creating a wide range of career opportunities. Unfortunately, labour markets around the world are unable to keep up with demand for IT skills, and thousands of jobs are going begging even in relatively high-unemployment regions. 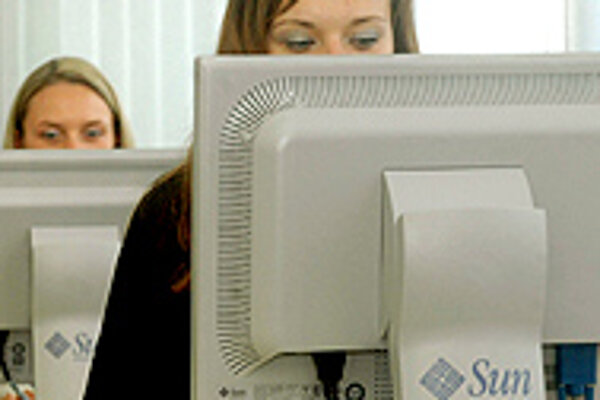 Font size:A-|A+  Comments disabled
THE IT field is one of the fastest developing industries and is also creating a wide range of career opportunities. Unfortunately, labour markets around the world are unable to keep up with demand for IT skills, and thousands of jobs are going begging even in relatively high-unemployment regions.

Based on a survey conducted this year by the IDC global market intelligence firm, demand for IT professionals by companies in the sector outstripped supply by 160,000 positions, and could reach 500,000 within three years.

In Slovakia, data shows that more than 2,500 IT positions went unfilled this year, according to Marek Gešo, marketing director for Accenture Slovakia.

Firms are trying to solve their problems with the lack of IT professionals by working with universities and launching various training programs. Accenture Slovakia, for example, has introduced a project called IT Chance for Everyone, stressing that it's never too late to start an IT career.

The project offers free training to candidates who have no previous IT experience or knowledge, in the hope that course graduates will be able to find a job in the IT sector. Candidates with degrees in subjects such as natural sciences, social sciences, philosophy, engineering, economy, or teaching get a chance at a new career, say the course backers.

"This is a two-month training course. Its aim is to turn people who don't know anything about IT into people who can find a job and start a career in this field," Gešo told The Slovak Spectator.

Accenture is currently running the course for a second time with 18 participants, just like the first round. Of the 21 people who participated in the first course, 18 passed.

"More than 50 percent of those who graduated the first course were offered employment at Accenture, and the majority accepted," Gešo said. Hired course graduates start work with Java and SAP.

"This project has had a strong response from the public. The large number of people interested in the course and the positive feed-back that we've received from past participants says a lot about its success."

Candidates may come from a wide variety of educational backgrounds but they all have to meet certain conditions: analytical thinking, lower- to upper-intermediate English skills, and a bachelor's degree or better.

"It's possible to make exceptions on the last condition if the candidates are just about to finish their university studies, if they are graduates of secondary technical schools, or if they have basic non-professional experience with programming and a desire to improve in this field. We also have these types of candidates," Gešo added.

Candidates are given a simple language and personality test. An Accenture recruiter makes the final decision on whether to accept a candidate.

Accenture says it already has enough suitable candidates to fill another four courses. "So far, we've been keeping the courses every two months, but we're considering running them more frequently," Gešo said.