THREE EVENTS typically mark the beginning of the holiday season in Bratislava: the hanging of Christmas lights and decorations at Tesco; the opening of the Christmas Market on the city's Main Square; and the Christmas Bazaar of the International Women's Club of Bratislava (IWCB). 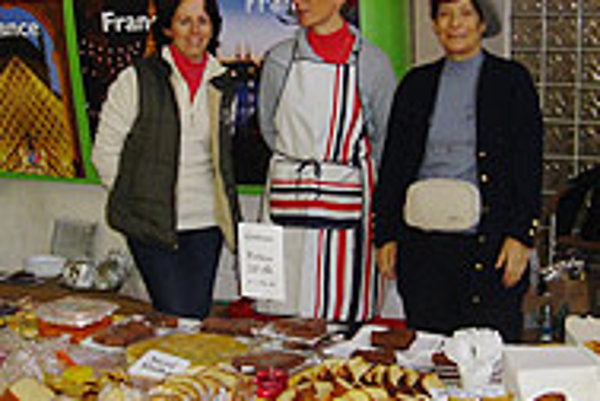 Font size:A-|A+  Comments disabled
THREE EVENTS typically mark the beginning of the holiday season in Bratislava: the hanging of Christmas lights and decorations at Tesco; the opening of the Christmas Market on the city's Main Square; and the Christmas Bazaar of the International Women's Club of Bratislava (IWCB).

This year's IWCB Christmas Bazaar takes place on November 19 at the Old Market Hall (Stará Tržnica) on SNP Square. At the annual event, now in its sixteenth year, IWCB volunteers sell food, handmade goods and tickets to raise money for charities, such as orphanages, homes for battered women and centres for the mentally and physically handicapped.

"Our purpose is to create a strong appreciation of life and culture in all countries," the IWCB Mission Statement says. "We find it essential to assist selected charities financially and to encourage our members to engage in charitable activities."

The bazaar's festive atmosphere usually attracts a large crowd, including a number of celebrities from politics and popular culture.

"This will be the most beautiful and colorful bazaar we've ever had," Coordinator Monika Jochem said. "Thanks to support from our sponsors, the Old Market Hall will be completely decorated. We even have a new logo and a slogan - Meet the World."

Meet the World alludes to the bazaar's trademark feature, International Tables, which raise money for the charities by building greater cultural understanding. The tables are staffed by embassy personnel and volunteers - some clad in traditional outfits - who promote their countries through discussion, pictures, leaflets and fresh samples of national delicacies.

Three new International Tables have been added to the bazaar this year: Palestine, the Republic of Georgia and Belarus.

"The Tables always serve a lot of delicacies from Africa, South America and Europe," Zora Grohoľová, PR Manager of the ICWB, said. "There are Russian caviar and cabbage cakes; delicious, warm dishes from Indonesia; Swiss cheese; Swedish saffron cake; Christmas cakes from all over the world; exotic sweets from Angola; and exotic Brazilian drinks. There will also be a variety of imported foods bought especially for the bazaar, such as French pa#tés; Spanish wines; Swiss, German and Dutch cheeses; original American peanut butter; and Chinese tea."

The restaurant on the first floor of the Old Market Hall has kindly offered its premises as a place for visitors to sit while they enjoy their food from the bazaar's International Tables.

Ten of the charity organizations the bazaar supports also plan to host their own tables, at which they will sell handmade goods and food. One of them is Lepší svet, which assists the mentally and physically handicapped.

"We appreciate the opportunity the bazaar gives us to show that the handicapped individuals we assist can make products of high artistic value," Dušan Mikulec, director of Lepší svet, told The Slovak Spectator. "The bazaar also gets a lot of visitors, so, of course, we hope taking part will bring in some additional finances that will enable us to continue improving lives."