THE JAILING of people close to the parties of the political opposition continued on November 15 with the arrest of well-known Bratislava attorney Ernest Valko, the former chief justice of the Czechoslovak Constitutional Court, and entrepreneur Ladislav Rehák, the largest sponsor of the opposition Christian Democrats. 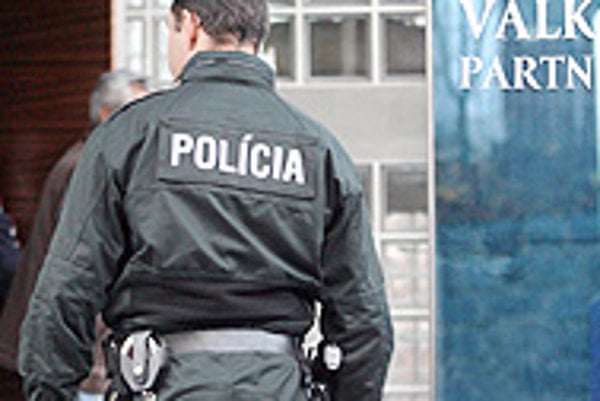 Font size:A-|A+  Comments disabled
THE JAILING of people close to the parties of the political opposition continued on November 15 with the arrest of well-known Bratislava attorney Ernest Valko, the former chief justice of the Czechoslovak Constitutional Court, and entrepreneur Ladislav Rehák, the largest sponsor of the opposition Christian Democrats.

Plainclothes policemen stopped Valko's car on a Bratislava street and forced him to come with them to the station for questioning on suspicion of extortion. At the same time, in another suburb of the Slovak capital, police also took Rehák into custody, the second time in a week they had arrested him on extortion charges.

Police also searched Valko's offices on Búdková Street and the premises of one of Rehák's companies from about 14:30 until 23:00.

Valko represented a number of state institutions under the past two Mikuláš Dzurinda governments, including the FNM privatization agency and the SPP gas utility, and also won a legal battle in 1998 that helped Dzurinda's SDK party remain in the running for elections and defeat Vladimír Mečiar's ruling HZDS party. Mečiar's HZDS is a member of the current Fico government.

Rehák is the chairman of the board of Slovakia's largest mobile operator, Orange, and is the owner of the Tyžden weekly, which has mounted a campaign against former ŠtB communist secret service agent Juraj Široký, who is widely regarded as a main sponsor of the ruling Smer party.

At first, police gave little information about what was happening, saying only that the two men were being questioned for "serious offenses".

However, following an interrogation that took all night until November 15, police said the two men had been charged with extortion, but again refused to provide details.

During the day, the aktualne.sk news server revealed that the men were supposed to have threatened the owners of the Ravi Slovakia firm, Viliam Vittek and Rastislav Vittek, with criminal charges if they did not agree to return Sk15 million that Rehák said they had cheated him out of during purchases of land in Western Slovakia's Záhorie region for Rehák's Urbicom company.

Police Vice-President Michal Kopčík confirmed the police were trying to find out whether the charges of the Vitteks were true, or whether, as Rehák and Valko claimed, the two men had agreed to sign an affidavit in front of a public notary recognizing the Sk15 million debt. "It's the word of one side against the other, and we don't know who's telling the truth," Kopčík said.

"However, we have other evidence that points to the guilt of the arrested men," added Police President Ján Packa.

According to information obtained by The Slovak Spectator, Ladislav Rehák hired the Ravi Slovakia firm on the basis of a mandate contract to buy property for him in Záhorie. However, the two Vittek men disregarded the terms of the contract and began buying land for less than agreed with Rehák, keeping the difference - Sk15 million - for themselves. When Rehák found out what was happening, he and his lawyer, Ernest Valko, decided to solve the matter out of court by agreement with the Vitteks. At the beginning of July the four men signed an affidavit in front of a public notary in which the Vitteks undertook to repay the money. The deal was witnessed by the notary and another lawyer.

However, according to sources contacted by The Slovak Spectator, on the day after the affidavit was signed, the Vitteks returned to the notary's office, physically attacked her and took the original of the agreement in which they recognized their debt. The notary laid charges of assault and theft against them, but The Slovak Spectator was unable to discover from the police what results the investigation had produced.

On July 4, the Vitteks laid extortion charges against Rehák and Valko. According to information obtained by The Slovak Spectator, the extortion consisted in Valko's statement that if the Vitteks did not return the money, the matter would be turned over to the police.

The fact that the police did not act for more than four months after the charges were filed is unusual, especially given that during this time the accused could have fled, influenced witnesses or otherwise foiled the investigation. When asked about this during a press conference on November 16, Packa said that "procedural requirements of the investigation" had prevented police from acting sooner.

The arrests and the subsequent police actions drew a protest from the Slovak Bar Association, which objected to the fact that the police took data and computers from Valko's office that had nothing to do with the extortion charges. "The search of Ernest Valko's law offices and the illegal order to release computer files was a violation of the Advocacy Act and other laws," the Bar said in a statement, explaining that by searching the files the police would be violating the client confidentiality law.

However, Packa claimed that "the police only took things that were related to the crime". Kopčík also insisted the raid had been legal, saying: "the representative of the Slovak Bar [who attended the raid] signed the warrant."

According to information obtained by The Slovak Spectator, however, Ján Havlát, who oversaw the search on behalf of the Bar, signed the warrant only after adding a signed statement that it had been illegal.

Given that Valko was a well-known participant in post-1989 politics in Slovakia, many public figures reacted with disquiet at the manner in which he had been arrested. Valko's friend and former political ally in the VPN party, Peter Zajac, told The Slovak Spectator: "I regard the way in which Ernest Valko's office was searched, during which they took his electronic files, as a very bad sign. It reminds me of times I thought were already behind us."

Rehák and his two sons, Juraj and Martin, were arrested last week in the Svätuškár (Holy Roller) police operation, and also charged with extortion, this time of a former accountant at one of their firms who they claimed had embezzled millions of crowns. Again, the accountant signed a statement in front of a public notary acknowledging the debt, but later told police she had been threatened.

As The Slovak Spectator went to print on November 17, a state prosecutor recommended that Valko and Rehák be remanded in custody. The courts had 72 hours to rule on the request.