THE RECENT death of a Slovak soldier in Iraq has again raised questions regarding Slovakia's military involvement in foreign missions. 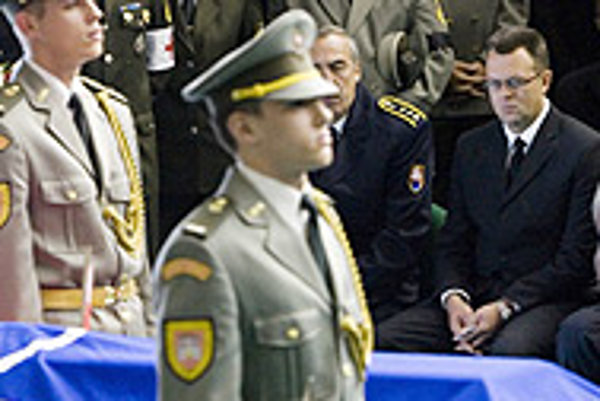 Sergeant-Major Rastislav Neplech was killed by an explosion during the night of November 10 as a convoy of 20 coalition force vehicles was moving towards the town of Al Qut, southeast of Baghdad. A resident of Žilina, the 32-year-old Neplech had been serving with the Slovak peacekeeping mission stationed in Al Hillah.

The explosion also killed one Polish soldier and seriously wounded another, who, along with a wounded Armenian soldier, was taken to a hospital in Baghdad. According to the Slovak Defence Ministry, 10 of the vehicles in the attacked convoy were Slovak, four were American, and six were Salvadorian.

Slovak PM Robert Fico has stated that the country's plans to withdraw from Iraq as of February 2007 will probably not be affected by Neplech's death.

The PM has suggested, however, that the country might reconsider its plans to move its 60 troops in Afghanistan from Kabul to Kandahar, as requested by NATO, due to safety concerns.

"The death of Slovak soldier Neplech in Iraq could have a considerable impact on Slovakia's decision on whether to approve the transfer of our military engineers to the Afghan town of Kandahar," Fico said on November 11, describing the death of the fourth Slovak soldier to be killed in Iraq as "a very, very sad event".

But the PM added that despite NATO's assurances, he was not convinced that the other military units in Afghanistan would be able to secure the safety of Slovak soldiers in "such a dangerous zone as Kandahar".

According to the Defence Ministry, 56 Slovak soldiers were on their way to the Delta camp near the town of Al Qut when a bomb exploded under the third car in the convoy.

"It was very powerful, and the Hummer was nearly destroyed," said Defence Minister František Kašický. "Bombs are a part of everyday life in Iraq as well as in Afghanistan."

The minister said that Neplech, a father of two, would be buried with full military honours, and that his family would receive compensation.

Slovakia currently has 100 soldiers in Iraq who are serving under Polish command. The unit is scheduled to be withdrawn in February 2007, an operation that will probably take a few weeks.

Top political representatives have suggested that Neplech's death is further proof that Slovak soldiers should be withdrawn from foreign missions as soon as possible.

According to Ľubomír Bulík, the Slovak Army chief of staff, Neplech is the 53rd Slovak soldier to have died while serving on a foreign mission since 1993.

But while some Slovak ruling coalition politicians urge the withdrawal of Slovak troops from abroad, particularly the isolationist SNS, other institutions and political parties note that risk is part of a soldier's life.

"Military missions can end in such a personal tragedy," said the Slovak Foreign Minister Ján Kubiš.

However, public opinion is increasingly in favour of withdrawing Slovak troops.

According to a recent poll by the MVK agency for the Sme daily, only 17.2 percent of Slovaks support leaving Slovak soldiers in Iraq, while nearly 57 percent favour a withdrawal.

The troop withdrawal has the greatest support among the voters of the current ruling parties: SNS, Smer, and the Movement for a Democratic Slovakia (HZDS).

The ruling Smer party promised "the immediate withdrawal of Slovak troops from Iraq" before this year's general elections. Later, after consulting with their NATO partners, the country's leaders agreed that the removal of the Slovak military unit would take place in February 2007.

In place of its 100-strong unit in Iraq, largely composed of military engineers who help clear local minefields, Slovakia was asked to increase its military presence in Afghanistan, where it currently has around 60 soldiers.

According to former Defence Minister Juraj Liška of the opposition Slovak Democratic and Christian Union (SDKÚ), however, the missions in Iraq and Afghanistan must be considered separately.

"The tragic death of Rastislav Neplech in Iraq should not influence Slovakia's decisions on the possible involvement of Slovak troops in southern Afghanistan," he said, adding that Slovakia's international commitments were also important.

On November 13, after Neplech's body arrived in Slovakia to be buried on November 16, Kašický said he was still in favour of the continued presence of the Slovak armed forces in foreign missions.

He noted, however, that the security of Slovak soldiers remained the foremost consideration.

"It is necessary for Slovak soldiers to take part in [foreign] missions as it allows them to obtain combat experience and to learn new strategies.

"The missions are also opportunities to improve their language skills and professional military qualifications. But we have to be sure we have done everything possible to minimise the dangers before we dispatch them," Kašický said.