MUNICIPAL politics in Slovakia are colourful even by the exotic standards set at the national level. But when citizens go to the polls on December 2 to elect mayors and councilors in 2,926 voting districts, they will have to somehow make sense out of the crazy coalitions, the heavy-handed election strategies and the mixed bag of candidates to choose the people who will decide on matters that touch their lives most intimately for the next four years. 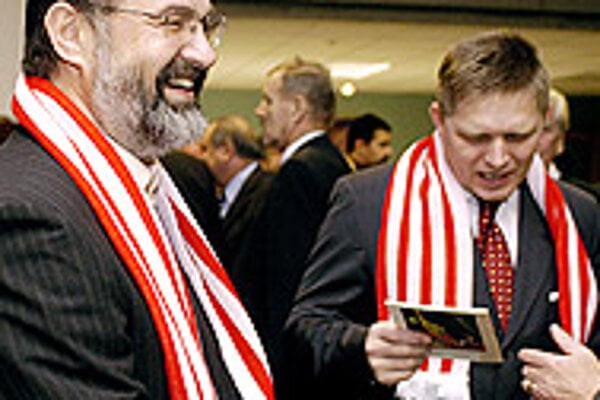 Font size:A-|A+  Comments disabled
MUNICIPAL politics in Slovakia are colourful even by the exotic standards set at the national level. But when citizens go to the polls on December 2 to elect mayors and councilors in 2,926 voting districts, they will have to somehow make sense out of the crazy coalitions, the heavy-handed election strategies and the mixed bag of candidates to choose the people who will decide on matters that touch their lives most intimately for the next four years.

At the municipal level, it seems, different rules apply than in national politics. Although the campaign didn't begin officially until November 15, for example, in many districts (i.e. Monika Beňová in Bratislava and Ivan Saktor in Banská Bystrica) candidates were advertising long before then, and getting away with it because the law provides for no sanctions in such cases. The offenders typically claimed their billboards were only of an informational character and had nothing to do with elections.

Those without the brass to run grandiose campaigns thought up other ideas. The mayor of Donovaly in Central Slovakia, for instance, handed out 25 kg of potatoes to every resident, while Bratislava mayoral candidate Marián Kočner promised to hold a draw on election day in which three lucky voters would win Sk1 million each of Kočner's money, just for turning out.

With such advantages and temptations on offer, voters may be looking to each candidate's political to know how to vote. Here again they might be confused rather than enlightened, as political coalitions at the local level tend to contain unlikely pairings.

Monika Beňová, for example, is running for a coalition that includes the Smer and the ethnic-Hungarian SMK parties, which have extremely tense relations at the national level. In Levice, the opposition SMK and SDKÚ are working with the governmental HZDS, while in Šaľa in Nitra region, mayoral candidate Tibor Baran is running for 11 parties including the SMK and the far-right SNS, which are sworn enemies.

"I don't know how this coalition came into being," said SMK leader Béla Bugár. "It's the first time the SMK has been in a coalition with the nationalists."

Party leaders say that their local branches have much greater freedom in deciding whom to work with, since local politics are concerned with much more mundane issues.

"With over 2,000 municipalities in Slovakia, you're not going to be able to avoid curious combinations," said SDKÚ leader Mikuláš Dzurinda. "Municipal politics is about water treatment plants, roads and sidewalks, not sending soldiers to Iraq, relations with the US and so on."

Preparations for the current campaign have indeed underlined the different problems that municipal governments deal with. In north Slovakia's Kežmarok, for example, the city has been trying for 16 years to decide whether the Juh suburb belongs to it or the neighbouring town of Ľubica. Mayor Igor Šajtlava, running again as an independent, notes that the Statistics Bureau claims it has 13,000 residents for tax purposed, but 17,000 for the purposes of the election.

Many towns have to deal with mayors and councillors who are too busy with their other jobs to give their full attention to their municipal duties. About 20 percent of MPs at the national level, for example, are running in local elections, including Ján Slota (SNS) in Žilina, Alexander Slafkovský (SDKÚ) in Liptovský Mikuláš, Tibor Bastrnák (SMK) in Komárno, Klára Sarkozy (SMK) in Veľký Meder, Vladimír Jánoš (Smer) in Prievidza, László Szigeti (SMK) in Štúrovo, Martin Pado (SDKÚ ) in Michalovce and Stanislav Janiš (SDKÚ) in Martin.

Just as previous engagement is not a barrier to some candidates, corruption charges are no deterrent to others. Pavol Bielik, the mayor of the Bratislava suburb of Rača elected for the Christian Democrats (KDH), is running again as an \independent even though he is currently on trial for bribery (his billboard ads depict him with a band of tape over his mouth, as if his legal problems were an attempt to muzzle an otherwise good man). Not to be outdone, Košice Deputy Mayor Eugen Čuňo (SDKÚ), who is also being tried for bribery, is also running for mayor as an independent.

Košice features one of the most interesting mayoral races in the country, with the elections expected to be fought between current Mayor František Knapík (KDH, SDKÚ and SMK) and Boris Farkašovský (Smer, Free Forum, HZDS, SNS). Farkašovský served as deputy mayor to Zdenka Trebuľa until 2002, while Knapík was elected in by-elections in April this year with only 7,000 votes in a tiny turnout.

Since then, however, he has come up with a program to improve conditions in the infamous Luník 9 Roma ghetto by using a carrot-and-stick system of rewards for people who try to help themselves, and punishments for those who don't. The measure was judged the best municipal program in Slovakia this year by the INEKO economic and social policy NGO.

The Slovak Rating Agency also raised Košice's rating for its strong budgeting in 2005, when it finished with a budget surplus of Sk56 million. Even though this success was achieved before Knapík became mayor, voters are likely to ascribe it to him.

Despite its recent good fortune, Košice is also burdened by a massive debt that was accumulated during the tenure of Mayor Rudolf Schuster during the 1990s; by the end of 2005, this debt was 65.8 percent of the city's budget income, even though the law caps municipal debt at 60 percent.

Knapík could also be hurt by the fact that city council recently awarded him a bonus of Sk234,000, among other reasons because it was his 50th birthday.

One of Knapík's opponents, Vladimír Gurtler, has also filed charges against him for putting up election posters weeks before the campaign began. Knapík, predictably, defended the ads as "informational in character", but Gurtler asked: "If the mayor doesn't follow the law, people may quite rightly ask why they should either."

Nine candidates are running for mayor in the capital of Central Slovakia, including incumbent Ján Králik (independent), Ján Chladný (SDKÚ, KDH and HZDS), former Slovak unions boss Ivan Saktor (Smer, SNS, Greens and Communist Party). Chladný told The Slovak Spectator that he wanted to revive the concept of Banská Bystrica as Slovakia's third metropolis, given its storied history as a religious and cultural site. He stressed the need to improve transport access to the city, and to include it in the European Cities of Culture project in order to raise its visibility.

In Nitra, Slovakia's oldest city (settled 30,000 years ago), would-be mayor František Halás (SDKÚ) is another who sees it as a candidate for the European Cities of Culture project. One of his 11 adversaries, regional state office chairman Jozef Dvonč (Smer, KDH and SNS), promises a stew of the priorities of his backers: a social program with Christian and nationalist elements.

However, the leading candidate in Nitra is an independent, Ferdinand Vítek, who was dropped from the SDKÚ ticket for "putting his personal business ambitions above the interests of the city", according to the party.

Halás also has the support of the NGO sector, and says he feels like a civic candidate rather than the nominee of the SDKÚ. "Nitra needs its own face," he told The Slovak Spectator. "It's the oldest city in the country, but it doesn't behave like a historical city. If we want to visit the Cathedral, we have to announce it ahead of time, because it is not open to the public. The museums at the castle also don't work like they should. We have to invest into our cultural monuments to attract visitors and liven up our tourist industry. We also need to build a four-star hotel so that tourists don't just spend a few hours here but a few days."

He added that the city should use its land reserves to build houses for young families with small gardens, rather than crowding more people into existing housing estates, "to improve the culture of housing".

"Nitra also needs to make better use of euro-funds, as so far we have only used them for one project, a water treatment facility, which has already been completed," he said.