Is a deal finally in the pipeline?

DESPITE warnings not to let the Kremlin gain control of a 49 percent stake in the Transpetrol oil pipeline administrator, Slovakia has still not moved to recover the stake itself. Even if it now decided to do so, analysts say, it still might not meet a deadline of April 2007 to accomplish the transaction. 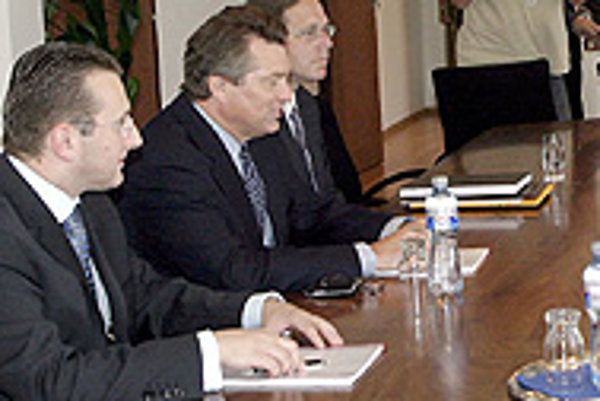 Font size:A-|A+  Comments disabled
DESPITE warnings not to let the Kremlin gain control of a 49 percent stake in the Transpetrol oil pipeline administrator, Slovakia has still not moved to recover the stake itself. Even if it now decided to do so, analysts say, it still might not meet a deadline of April 2007 to accomplish the transaction.

Slovak Economy Minister Ľubomír Jahnátek and President Ivan Gašparovič visited Moscow for talks with Russian President Vladimir Putin in the second week of November, but no firm decision was taken on the future of the Slovak firm, except that it would not be sold to a third party.

"We simply agreed that there are two possibilities - either the Russian side will get the [49 percent] stake, or Slovakia will have 100 percent. We're now looking at which option would be best for Slovakia," said Gašparovič on his return on November 11.

Energy professionals fear that if the stake remains under Russian control, the Družba pipeline that Transpetrol uses will not be employed to transport Caspian Sea oil west, as the European Union wants. Instead, the company would continue to transport exclusively Russian oil, preventing the diversification of supplies and increased energy security for Slovakia and Europe.

A pipeline capable of delivering Caspian oil from Odessa on the Black Sea currently connects to Brody on the Ukraine border, but Transpetrol has not taken the opportunity to hook it up to Družba.

"Energy security is an important factor in the decision on the future of Transpetrol," said the Energy Security Institute (ESI), a Brussels-based energy lobby group, in a recent statement. "Transpetrol has an important role to play in the construction of the Odessa-Brody Euro-Asian pipeline corridor."

The matter is increasingly urgent, as Slovakia's right of veto on the disposition of the stake expires at the end of April 2007. "Given that the acquisition [of the 49 percent stake] could take several months, the ministry should assign the solution of the Transpetrol share issue a higher position on its scale of priorities," the ESI said.

"For the Russian side it is more advantageous to draw the whole process out, because after April 2007 it will be easier for them to sell the stake to a Russian firm."

The Transpetrol stake, which gives its owner managerial control over the company, was privatized in a tender in 2002 to Yukos Finance, a daughter of the Russian Yukos, for $74 million. However, Yukos found itself in financial problems in 2003 when the state decided it owed back taxes of $27 billion. Observers believe the Kremlin was seeking revenge for the opposition activities of Yukos owner Michail Chordokovsky, and was also trying to reassert state control over Russia's raw materials.

Whatever the motives, Yukos entered bankruptcy in August 2006, meaning that its assets - including the Transpetrol stake held by its daughter - were liable to be sold to satisfy the claims of creditors.

Before that could happen, however, the stake was quietly transferred to a Dutch foundation called Stichting Administratiekantoor Yukos International by Yukos Finance bosses Steven Theede, Bruce Misamor and David Godfrey. A Dutch court has since ruled that while Yukos legally owns the Transpetrol stake, the rights to it belong to the foundation.

Minister Jahnátek agreed with the three Yukos Finance bosses on August 9 that Slovakia would buy back the Transpetrol stake. However, when Yukos bankruptcy trustee Eduard Rebgun, who is close to the Kremlin, found out about the deal, he fired the three men for acting against the interests of Yukos.

"I think that Jahnátek shouldn't have gone public right away with the deal to buy back the shares from Yukos Finance," said Alexander Duleba, director of the Slovak Foreign Policy Association. "[If he had kept quiet] the bankruptcy trustee would not then have fired the management of Yukos Finance, and today Slovakia would be the owner of the shares."

Slovak government officials have changed their minds several times on what to do with the Transpetrol shares. At the beginning of 2006, former Economy Minister Jirko Malchárek spoke of selling the stake to the Russneft company as one of the best options; Russneft even gained the approval of the Slovak Anti-Trust Bureau for the transaction in May.

However, when former Prime Minister Mikuláš Dzurinda visited the United States, according to the Trend business weekly, he was told by top administration officials that it was not a good idea to let the stake remain in Russian hands as it would prevent the diversification of energy supplies to Central Europe. Several weeks later, Malchárek said it would be best if the shares were returned to Slovakia, while the Slovak government used the veto clause in the privatization contract to block the sale of the shares to Russneft.

After early elections and the defeat of the Dzurinda government, the new Fico cabinet began discussing the possibility of letting the Russians keep the stake. Following a visit by Steve Hellman, an advisor to US Secretary of State, to Slovakia to discuss the Transpetrol deal, Jahnátek returned to the idea of buying the stake back from Yukos Finance.

"Let's face it, this was a bungled privatization in the first place," said Duleba. "The company should never have been sold to a Russian oil producer [Yukos], because its interest would naturally be to use Transpetrol to transport its own oil.

"The best thing Slovakia can do in the current situation is to buy the stake back so it could influence the ensuing selection of the private buyer."

Duleba said it would be best if the firm were sold to a consortium of refineries which would have a vested interest in using its capacity to the fullest.