The new sheriff in town

WHEN the previous right-wing Mikuláš Dzurinda government decided to focus on economic reforms as its main program priority, it elevated the author of these changes, former Finance Minister Ivan Mikloš, to the second most powerful position in the cabinet after the prime minister. 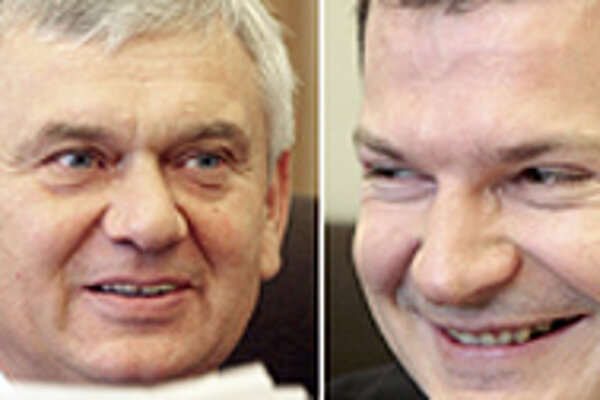 Font size:A-|A+0
WHEN the previous right-wing Mikuláš Dzurinda government decided to focus on economic reforms as its main program priority, it elevated the author of these changes, former Finance Minister Ivan Mikloš, to the second most powerful position in the cabinet after the prime minister.

With Slovak business news dominated by energy headlines rather than the changes to tax and other reforms that Fico promised in his election program, Jahnátek is playing an unexpectedly important role in the cabinet, and has the full support of his boss, PM Robert Fico, in his spirited fight against the country's energy giants to achieve lower prices.

Ján Tóth, chief analyst with ING Bank, said that one of the reasons why the government is focusing on energy policy is that "cheap energy is a popular topic with voters".

Tóth also noted, however, that cheaper energy could contribute to reducing inflation, helping Slovakia to meet one of the key economic requirements on its path towards adopting the euro on January 2009 as planned.

Yet the government's choice of finance minister only reinforces the impression that attention is deliberately being diverted away from reforms, and the cabinet's failure to scrap them as advertised.

Mikloš, who was recognized as the architect of economic reform in the two previous Mikuláš Dzurinda governments, earned international praise for his work. He was replaced by Počiatek, a man who owns bars and restaurants and worked for the Telenor telecoms firm, but who is virtually unknown in political or economic circles.

When The Slovak Spectator interviewed him in October, Počiatek said he owed his job to his friendship with Interior Minister Robert Kaliňák, the No 2 man in Fico's Smer party.

"Our friendship was certainly of fundamental importance," the minister said. "Kaliňák is my contact not only to the Smer party, but to politics in general. He is the reason of reasons."

The new minister appears infrequently in public and limits his public statements to repeated assurances that Slovakia will adopt the euro on schedule in 2009.

Economy Minister Ľubomír Jahnátek, meanwhile, has been the point man on tough negotiations with energy firms, as well on talks in Russia to secure the buyback of oil transport company Transpetrol, and on a plan to give the state a greater say in setting energy prices (see story on page 6).

"Minister Jahnátek has my full support in the steps that he is taking against companies that hold a monopoly," said Fico at a recent conference of the Klub 500 industrialists association.

"We will do everything possible to make sure that energy prices do not go up next year," Fico said.

Since taking office, Jahnátek has embraced the role of a crusader for lower energy prices for households and business consumers, and has criticized the work of the independent network regulator, the Office for the Regulation of Network Industries (ÚRSO).

Jahnátek was ultimately forced to give up his plans to make it easier to sack ÚRSO officials, or to give industrial energy consumers a greater say in the regulator's decisions, after the European Commission intervened.

Počiatek's Finance Ministry was among the staunchest critics of the proposed changes, saying they threatened the independence of the regulator.

However, PM Fico pledged that "the government will never give up its efforts to have a greater influence in regulating energy prices" in order to secure fairer prices for Slovak citizens.

In addition to cheap energy, Jahnátek's ministry has also been given a lead role on another popular pastime of the Fico government - investigating the alleged wrongdoing of the former government's ministers and state managers.

"The list [of the former government's crimes] is endless," said Fico, who has vowed to inspect the privatization of power utility Slovenské Elektrárne, which falls under the Economy Ministry.

"There have been various suspicious sales of state property. We don't want to start writing black books, but if somebody is still grinning at our allegations that the political campaign was financed with dirty money... we will provide at least some basic information," said Fico at a press conference on November 9.

Asked by The Slovak Spectator how he would compare his position in the Fico government with that of Mikloš, Počiatek said: "I wouldn't, because you can never see what happens inside the government. Outward impressions are irrelevant - I know that today, because I'm inside.

"There's a huge difference between how things are presented by the media and how they are in reality."