ON THE SURFACE, the cabinet of Robert Fico is nearing the end of a peaceful first six months in office. The economy grew at a record 9.8 percent in the third quarter, the currency is at a record strength against the euro, and the government is riding a 60 percent approval rating, according to the latest polls. 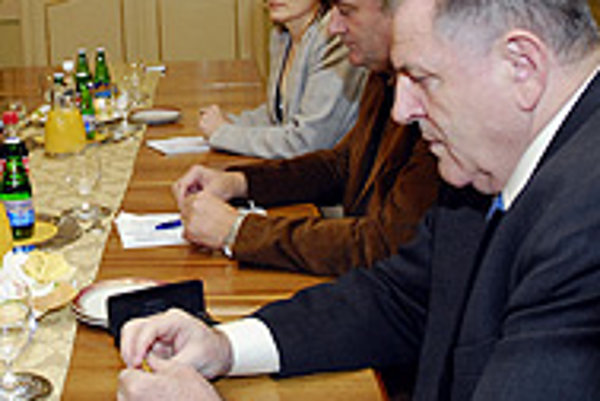 Font size:A-|A+  Comments disabled
ON THE SURFACE, the cabinet of Robert Fico is nearing the end of a peaceful first six months in office. The economy grew at a record 9.8 percent in the third quarter, the currency is at a record strength against the euro, and the government is riding a 60 percent approval rating, according to the latest polls.

If there is a cloud anywhere in these skies it is the complaints of Vladimír Mečiar, leader of the coalition Movement for a Democratic Slovakia (HZDS) party, who feels his party is not getting its due share of the spoils.

Mečiar was clearly initially elated that the HZDS, even though it captured only eight percent of votes in June elections, still managed to return to power after eight years. He agreed to Prime Minister Robert Fico's condition that he remain in the background and not take any significant post, but soon grew frustrated with his inability to influence government decisions.

The first signs of friction were seen following Fico's refusal to appoint Mečiar's candidate, Igor Urban, to the post of SIS director. Following the failure of the HZDS to capture other state and government posts it wanted, Mečiar said on Markíza TV on November 5 that "we reached agreement on who would be ministers and deputy ministers [in the government], but we didn't make progress anywhere else."

Part of the problem, say political analysts, is that Mečiar is simply used to having his own way.

"Vladimír Mečiar just isn't used to playing second fiddle," said political scientist Miroslav Kusý. "He is unhappy with his status in the coalition, but he caused it himself by joining the government unconditionally."

During the 1990s, Mečiar led three governments, and in 1991 enjoyed unheard-of approval ratings of over 80 percent. However, his increasingly authoritarian rule from 1994 to 1998 saw Slovakia dropped from NATO and EU waiting lists, and caused a democratic backlash in Slovakia that toppled him from power.

One of the main complaints of the HZDS chairman in the current government has been that the coalition council, a senior government body consisting of the leaders of the three parties, meets very irregularly, and thus is no longer a force guiding government policy.

"We will demand that coalition council dates be set before every cabinet meeting. Everything that is discussed by the cabinet should first be cleared by the coalition council," said HZDS MP Ján Kovarčík for the Pravda daily on November 22.

As an experienced politician, Mečiar first tried to solve his party's difficult position by political tactics. Given that influence within the coalition is determined by the parliamentary strength of each member party, Mečiar bolstered the ranks of the HZDS by luring MP Miroslav Kotian to his caucus from Ján Slota's Slovak National Party (SNS).

Political scientist Grigorij Mesežnikov, president of the Institute for Public Affairs, said the addition of Kotian, which raised the HZDS caucus to 17 members and cut the SNS club to 18, could help the party increase its clout. "Mečiar has apparently realized that the conditions under which the HZDS entered the coalition are not satisfactory for the party," he said.

Mečiar has also shown moderation towards the parties of the opposition, a tactic that has been welcomed by former PM Mikuláš Dzurinda of the Slovak Democratic and Christian Union (SDKÚ), who said that the best solution for Slovakia would be a coalition between the three right-wing opposition parties and Mečiar's HZDS.

However, political observers have questioned whether this flirtation is genuine on either side, or whether it is merely a tactic to make life difficult for Fico.

Pavel Haulík, a sociologist with the MVK agency, told Rádio Slovensko on November 2 that "HZDS voters would never accept [such a coalition], and for the HZDS it would be political suicide. They would be unlikely to win enough support in the next elections to enter parliament."

Mečiar's strategy, or his political patience, appeared to pay off at the November 22 meeting of the coalition council, the first since September. During the six-hour meeting, despite sharp opposition from PM Robert Fico, he managed to defend the election to the supervisory board of the state firm Transpetrol of a man who is a symbol of his 1994 to 1998 government - Július Rezeš, the former head of the VSŽ steel mill (see related article, page 1).

"I repeatedly demanded that the HZDS withdraw this candidate," said Fico after the meeting, but backed down when the HZDS insisted.

The Smer party leader also accepted Mečiar's demand that NGOs continue to be allowed to receive two percent of corporate taxes assigned to them by firms, even though it means the Finance Ministry will have to find Sk600 million somewhere else to make up the lost budget revenues.

The HZDS also won agreement on its demand that the government leave unchanged a tax rule for self-employed tradespeople that allows them to declare 60 percent of their income tax free.

Mečiar faces other battles with Fico in the coming days, such as attempting to have a HZDS nominee appointed as deputy director of the secret service (SIS). Current SIS boss Jozef Magala, a Fico appointee, has resisted the notion, and has said "we have the SIS under political control". However, HZDS MP Kovarčík said that Magala had agreed to meet with HZDS representatives at the end of November to discuss the appointment.

Another of Mečiar's goals is the abolition of the Special Court for organized crime and political cases, a goal that has been pursued by Justice Minister Štefan Harabin, a HZDS nominee, since he took office.

"The solution to the issue of the Special Court is key to the status of our judiciary, which is why we have to find it as quickly as possible," said Deputy Justice Minister Anna Vitteková on November 22, as Harabin presented a draft law to abolish the court by April next year without waiting for a government decision.

Fico has not said clearly whether he agrees with the plan, noting that "the proposal has been submitted, and when it is on the table we can discuss it, but not before then."