THE FORMER ruling Slovak Democratic and Christian Union (SDKÚ) re-elected Mikuláš Dzurinda as its unchallenged chairman for the next four years at a party congress on November 17, a date conspicuously chosen as the anniversary of the fall of communism in Czechoslovakia. 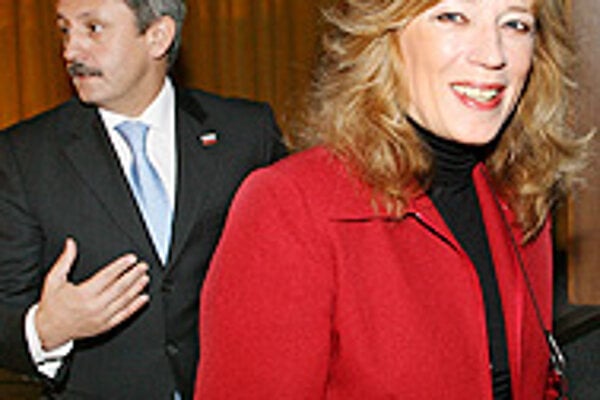 Font size:A-|A+  Comments disabled
THE FORMER ruling Slovak Democratic and Christian Union (SDKÚ) re-elected Mikuláš Dzurinda as its unchallenged chairman for the next four years at a party congress on November 17, a date conspicuously chosen as the anniversary of the fall of communism in Czechoslovakia.

The congress also confirmed the party's five deputy chairmen in their posts, giving the impression that no lessons had been drawn from the SDKÚ's defeat in June elections and its subsequent fall from power.

Unlike four years ago, when the SDKÚ's election result of slightly over 15 percent allowed it to form and lead a coalition government, Dzurinda's party scored over 18 percent in June 17 elections, but failed to cobble together a viable coalition.

However, there were other signs at the congress that the party was now recovering from the shock of finding itself in opposition after eight years in power, and that it had outlined a strategy to oppose the powerful ruling Smer party.

While Dzurinda, who faced no challenger for the leadership, received 384 votes out of the 408 cast, newcomer Radičová had the support of 352 of the congress delegates.

Following her election, Radičová said she wanted to continue pushing through the initiatives that she started after she was nominated to the post of labour minister by the SDKÚ under the previous government.

"I entered politics rather quickly and went straight to the top [as labour minister], so for me it was very important to have [my decision] to continue working with and for the SDKÚ confirmed by [the votes of] its members," Radičová said at a press conference following the congress.

Second, while the political opposition has been faulted since the Robert Fico government took power for being weak and divided, Dzurinda made it clear at the congress that he saw the future of his party in cooperation with its former government allies, the Christian Democratic Movement (KDH) and the Hungarian Coalition Party (SMK)

"Dear Pavol, Dear Béla," Dzurinda said in his congress speech, addressing KDH Chairman Pavol Hrušovský and SMK Chairman Béla Bugár. "Our cooperation brought peace to Slovakia. Our cooperation anchored Slovakia in the safety of the Euro-Atlantic community. Today, it depends on our cooperation whether Slovakia also has a hope for the future."

Dzurinda called on the SMK and KDH to stick together with the SDKÚ against the current coalition, which is dominated by the leftist-populist Smer party of PM Robert Fico.

"We consider the KDH and SMK to be our closest partners and allies, and we are offering them a fair partnership in cooperation," Dzurinda said.

However, deep rifts remain within the opposition on some issues, such as whether to offer their cooperation to one of the current ruling parties, Vladimír Mečiar's Movement for a Democratic Slovakia (HZDS).

Unlike the SDKÚ and SMK, the Christian Democrats are adamant about refusing to work with Mečiar, saying the abuses of power committed by the 1994-1998 Mečiar government and Slovakia's ensuing international isolation ruled the former prime minister out as a potential ally.

"The KDH must not and will not go [into government] with Vladimír Mečiar. He is an even bigger problem than the [far-right] SNS," said KDH Deputy Chairman Vladimír Palko, who is regarded as a possible candidate for the post of KDH chairman at that party's elections next year.

According to Dzurinda, the current opposition parties must find a way to work together despite "the differing emphases in our programmes".

"The SDKÚ considers these different emphases, individual priorities, and political tactics to be less important than the will and need to cooperate to defend the results we achieved together from 1998 to 2006 period, as well as to create a political alternative to the Smer party," Dzurinda said.

Gyula Bárdos, the head of the SMK's parliamentary caucus, agreed that the former ruling partners needed to cooperate.

"The SMK agrees that cooperation is necessary. This period [in opposition] could again bring us closer together, although it is clear that we still have to wait for the KDH, which needs to clarify its stance for the future," Bárdos told The Slovak Spectator.

In evaluating the political situation in Slovakia since the general elections in June 2006, Dzurinda made it clear that Smer was his party's main ideological and political enemy, and said there was no chance of any cooperation with Smer.

Dzurinda even labelled the current plans of the Smer-dominated coalition as "a dangerous combination of social populism, hidden nationalism, and expansive power politics in the personnel and institutional fields".

According to the SDKÚ leader, "Smer is introducing a bolshevik-populist experiment to Slovakia".

"The main political task for the democrats in the future is to defeat this experiment," he said.

Bugár and Hrušovský agreed that Smer was their main political rival and accepted Dzurinda's offer of a joint opposition policy.

Hrušovský said he also considers the other two ruling parties, the SNS and HZDS, as political opponents, but said the main thrust would be concentrated against the Smer party.

"We have to realize who rules Slovakia today. It's neither the HZDS nor the SNS, but Smer. Smer has such a strong position in parliament, let alone in the government, that it does not even need the help of the remaining two [ruling] parties to push through its goals.

That's why the main focus of opposition politics will be Smer," Hrušovský said.