THE POLICE team that raided the offices of Bratislava attorney Ernest Valko removed from the premises files and documents that had nothing to do with the charge of extortion against him, according to a source who was present during the raid. 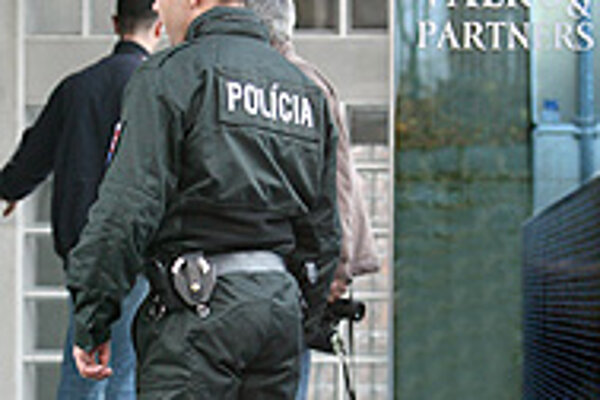 Font size:A-|A+  Comments disabled
THE POLICE team that raided the offices of Bratislava attorney Ernest Valko removed from the premises files and documents that had nothing to do with the charge of extortion against him, according to a source who was present during the raid.

The source, who was cited by the aktualne.sk news server, said that the files, tapes and other records seized contained the names of Valko's many clients and details of their cases, including a multi-billion crown fraud case involving IOUs signed on the account of the SPP gas utility by former Economy Minister Ján Ducký, who was murdered in 1999.

Police took a CD inscribed "Office of the Slovak President" as well as a VHS cassette title "UNION versus SPP", the names of the parties to the IOU case.

They also removed documents and entire computers that did not belong to Valko but to his attorney colleagues, including a 140-page file tied up with string and inscribed as the property of "JUDr. Lipovský", and a computer from the office of Dr. Roman Krivošík.

The search was attended by nine attorneys, in addition to the police. Six of them filed a complaint on the spot against the police procedures, which they declared to be illegal.

Their strongest objections were to the copying and removal of data on computers and servers in Valko's office building that had nothing to do with the case.

In the complaint, which The Slovak Spectator managed to obtain, one of the lawyers complained that police had seized a server containing "the personal data on my clients, and documents regarding cases in which I represented them".

The lawyer also complained that "no legal reason exists for the police to remove and use such data, given that their criminal investigation did not concern my person or that of any of my clients".

However, at a press conference following the search, Police Corps President Ján Packa and his deputy, Michal Kopčík, defended the police approach. When asked by journalists about the formal complaint filed by the Slovak Bar Association, both men said that the media could not judge whether the information taken had something to do with the extortion case.

Ernest Valko and entrepreneur Ladislav Rehák were charged with extortion on November 15 for allegedly requiring two men they said had cheated them of Sk15 million to sign a statement acknowledging the debt in front of a public notary.

The record says that at 14:55 on November 15, two members of the bar - Ján Havlát and Ján Gereg - entered Valko's offices, which police were then searching. "JUDr. Havlát Ján and JUDr. Gereg Ján arrived from the SAK [Slovak bar] and demanded to be present at the search of the premises. This was permitted," the record says.

Police spokesman Martin Korch later insisted that the lawyers had been invited to attend by the police, but Havlát said that they had been asked to be present by Valko's lawyer, Ondrej Mularčík, and not the police.