THE APPOINTMENTS made to the boards of the Transpetrol oil transport company at an extraordinary shareholders meeting on November 20 have been criticized by the political opposition as a return to the 1994-1998 Vladimír Mečiar era. 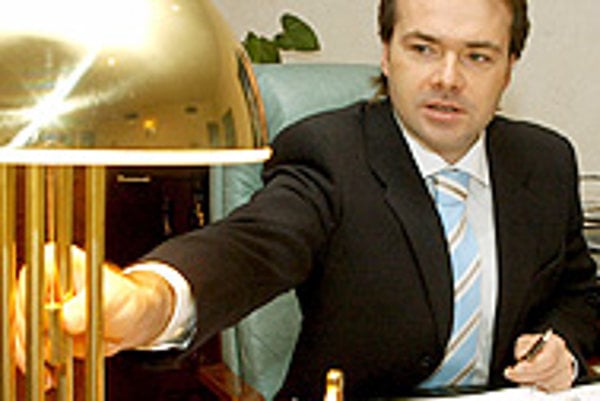 Font size:A-|A+  Comments disabled
THE APPOINTMENTS made to the boards of the Transpetrol oil transport company at an extraordinary shareholders meeting on November 20 have been criticized by the political opposition as a return to the 1994-1998 Vladimír Mečiar era.

Acting on instructions from Minister Ľubomír Jahnátek, the Economy Ministry, the 51 percent majority owner of Transpetrol, appointed Július Rezeš to the supervisory board and Sergej Zápotocký to the board of directors. Both men in the 1990s were members of the management of the VSŽ steel mill, which was privatized in a snap sale to the Manager firm of Alexander Rezeš in March 1994 by the second Mečiar government, hours before it lost power.

Under the leadership of Alexander Rezeš and then his son Július, VSŽ came close to bankruptcy in 1998 after having made a profit of Sk600 million the year before.

Rezeš was nominated to Transpetrol by the HZDS ruling coalition party. "He's educated, and he's a decisive young man. So why not?" said HZDS MP Ján Kovarčík.

"No one even in their dreams would have imagined that these people could return to a place where their job is to protect state assets," countered Pavol Hrušovský, the chairman of the Christian Democrats.

Even PM Robert Fico objected to the nomination of Rezeš, telling HZDS Chairman Vladimír Mečiar on November 22 at a meeting of the coalition council, a senior government body, that it was unacceptable. However, Mečiar said he stood behind his nominee, and that the HZDS would take full responsibility for the choice.

"It seems unjust to me to prosecute a son because of the father," Mečiar said at the meeting.

"This is confirmation of how the HZDS regards the period when it was in power and the Rezeš group had a strong position," said political analyst Grigorij Mesežnikov.

Blast from the past

The former management of the VSŽ steel mill was not only a "symbol of asset stripping" under the 1994-1998 Mečiar government, in the words of former PM Mikuláš Dzurinda, but it was also suspected of ties to organized crime.

The Sme daily reported that lead members of the VSŽ "kinder-management", as the young managers appointed in February 1998 were known, were frequently seen in the company of Košice gang leaders Robert Holub and Karol Kolárik, both of whom have since been murdered.

Then-police corps president Ján Pipta told the newspaper that one young VSŽ manager "was in contact with Robert Holub and his murdered accomplice, Štefan Fabian", while the daughter of the former main VSŽ shareholder attended Fabian's funeral. Pipta did not name names, however.

In November 1996, a bomb went off in the front yard of a house belonging to VSŽ board member Ján Smerek, while a year later, according to the local Košický Večer paper, Smerek and Alexander Rezeš received empty shell casings in the mail.

In 1998, Miloš Kaštan, a member of the underworld group of Mikuláš Černák, was also charged with extortion of one of the companies in the VSŽ group, while in October 1999 police foiled a mafia kidnap attempt on Štefan Sarnovský, the director of VSŽ daughter company VSŽ Export.

According to a former member of the SIS secret service contacted by The Slovak Spectator, organized crime was attracted to the steel mill by the perception that there was easy money to be made.

"It was clear that massive amounts of assets and money were being stripped and stolen from the company, and that kind of thing always draws organized crime," the source said.

The brother of Sergej Zápotocký, Alexander, is currently a shareholder in a firm in the Czech Republic, Turan s.r.o., with another former VSŽ supervisory board member, Alfonz Lukačin (1994 to 1997) and an Austrian national named Barak Alon.

Alon has been charged in the Czech Republic with stealing eight billion Czech crowns from the Komerční Banka institution between 1997 and 1999 with the help of KB managers, but is currently missing.

Sergej and Alexander Zápotocký currently or formerly served in seven companies in Slovakia together.

In May 2001, the Russian firm Lemz won a Defense Ministry tender to modernize the army's radar.

Lemz is represented in Slovakia by the Chemica firm of Košice, one of whose shareholders was former army colonel Ján Fürstenzeller, a friend of then-Deputy Defense Minister Jozef Pivarči.

The other two partners in the firm were Sergej Zápotocký and Peter Hrinko, one of the founders of the Manager firm which privatized VSŽ, and later the firm's CEO, until he was replaced in 1996 by Ján Smerek.

No member of the current or former management of VSŽ has ever been charged with an organized crime-related offense.

Dušan Mach, a new member of the Transpetrol supervisory board, is also chairman of the supervisory board of the Košice firm Fakon, where Speaker of Parliament Pavol Paška served on the board of directors from 1995 to 2002.

"Even though we know each other, Mr Paška had nothing to do with this," said Mach.

Alexander Zápotocký was also a member of the supervisory board of Fakon from 1995 to 2002.

Ladislav Haspel from the Grafobal Group of media mogul Ivan Kmotrík was also nominated to the Transpetrol supervisory board, as was Viliam Križan and Mikuláš Rakovský, a former manager with the Petrimex company during the tenure from 1993 to 1995 of Andrej Babiš, another reputed Smer sponsor.

Former PM Dzurinda said that the board appointments at Transpetrol represented a display of arrogance by the new Fico government.

"It took us by surprise. It's an arrogant, insensitive display of power, and it shows contempt for public opinion," Dzurinda said at a November 22 press conference.

The personnel appointments to Transpetrol virtually obscured the fact that the company is at a critical juncture in its development.

The Slovak government is currently in talks with the Kremlin about repurchasing a 49 percent stake in Transpetrol that was privatized to the now-bankrupt Russian oil company Yukos in 2002.

Energy sector experts say that if Slovakia does not recover the stake, the Russian owners - Yukos' creditors - would be unlikely to allow the pipeline to carry anything but Russian oil, thus preventing the diversification of sources to include Caspian oil.

Transpetrol currently transports about 10 million tonnes of oil annually through the Družba pipeline, half of which is consumed by the Slovnaft refinery in Bratislava, and the other half is sent on to the Czech Republic.

At the EGM, however, the two Russian groups fighting for control of the 49 percent stake - one representing Yukos bankruptcy trustee Eduard Rebgun, considered close to the Kremlin, and the other the former management of Transpetrol stake owner Yukos Finance - were unable to agree to coordinate their steps. The EGM was thus able only to approve the personnel changes.