Mikuláš or the Devil: Poslúchali ste?

BACK IN 2002, when I bought a Devil's mask for Halloween, I used to amuse our son, then three, by slipping it on at the most unexpected moments. You know, he's on the can, his little legs stuck straight out, humming to himself or something, when a hand reaches around the door and switches the light off. 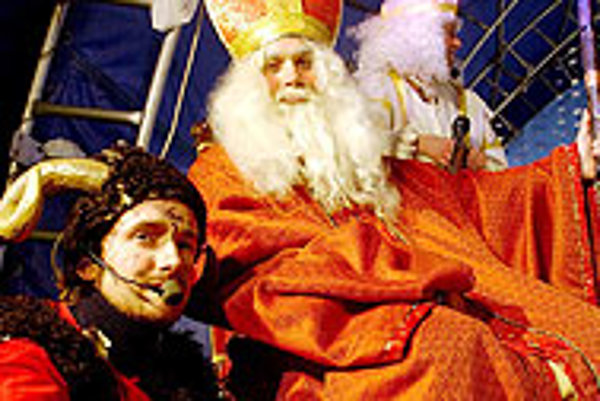 Font size:A-|A+  Comments disabled
BACK IN 2002, when I bought a Devil's mask for Halloween, I used to amuse our son, then three, by slipping it on at the most unexpected moments. You know, he's on the can, his little legs stuck straight out, humming to himself or something, when a hand reaches around the door and switches the light off. Then a Devil's face swims through the darkness, chuckling coldly.

It's amazing how loud some little kids can scream, how copiously they can cry.

Next week, for parents with young children (mine is now a jaded seven years old) it gets even better. Dads get to don scary masks for an officially sanctioned occasion - Mikuláš, the Slovak visit of St Nick, accompanied by the Devil (čert) and an Angel (anjel).

Here's the script: Every year on December 5, the day before Mikuláš, before children go to bed, they clean their boots (čižmy) and arrange them on the windowsill (okenná parapeta). The idea is to get them into bed with the promise that Mikuláš is on his way, or at least have them confined to their rooms, singing: "Mikuláš, čo nám dáš?" (Mikuláš, what will you give us?)

For children whose parents have arranged to have the Mikuláš trio (usually some willing neighbours) make the rounds, Mikuláš eventually rewards their frequent trips to peer out the window by entering loudly and demanding to have the children presented.

Then follow the questions that St Nick seems stuck on in every culture.

"Tak čo detičky, poslúchali ste?" (So, children, have you been behaving?)

"Lebo kto neposlúchal, nič nedostane. A s ním bude mať robotu čert." (Because whoever hasn't won't get anything. And the devil will have to deal with him.) Some kids hide (schovávajú sa), or even burst into tears (rozplačú sa), when the Mikuláš trio comes to their door.

Those who aren't hiding or crying are then required to demonstrate they deserve their gifts from Mikuláš by either singing a song (zaspievať pesničku) or reciting a poem (recitovať básničku). The gifts, delivered by the Angel from a basket (košík) are usually packages containing sweets and candies (sladkosti, cukríky) and fruit (ovocie), while the bad children who haven't been obeying their parents or bungle their recitations are supposed to be given lumps of coal (uhlie) and a taste of the wooden spoon (varecha).

However, the Devil rarely gets to follow through on these juicy threats, more's the pity.

Parents who haven't managed to organise a Mikuláš visit for their children sneak the packages of candies into the shoes on the windowsills while the children are asleep, sometimes also painting the naughty children's cheeks black with coal to prove the trio was there and that the devil touched them while they were sleeping.

Mikuláš, although it is celebrated across the country, is not a national holiday, more a folk tradition. People still go work, and children to school, where the following poem is usually written on the blackboard before the lessons start:

What a fine tradition! Fruit and cake instead of computer games, kids learning songs and poems rather than staring gloomily at the TV, and a slap in the head for spoilsport teachers.

Svätý Mikuláš is the Slovak version of the name Saint Nicolas, although his legend has come to mean different things in different countries. The Bishop Mikuláš lived in the fourth century and was known for his generosity to children, students and the poor. Five centuries later the Church made December 6 a holiday in his memory.

Over the years, in some Western countries, Saint Nicolas came to be synonymous with Santa Claus, the jolly, round and rosy-cheeked man who drove a sled of reindeer, snuck down chimneys and left presents under trees on Christmas Day.

Slovak Matters is a bi-weekly column devoted to helping expats and foreigners understand the beautiful but difficult Slovak language. The next Slovak Matters will appear on stands December 11, Vol. 12, No. 48.