Where politics and life meet

MOST people from Bratislava probably think the last time major Hollywood stars set foot here was in 1997, when George Clooney and Nicole Kidman spent a few days filming The Peacemaker. 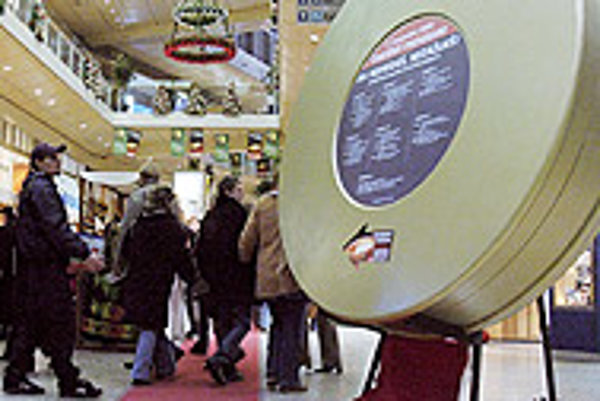 But the International Film Festival Bratislava (IFFB) has attracted its share of stars since it began eight years ago. Last year's festival drew media and celebrities from around the world, as well as more than twenty thousand guests, to a competition that saw American actor Liev Schreiber win Best Directorial Debut for Everything Is Illuminated and legendary British actress Vanessa Redgrave take home the Artistic Excellence Award.

This year, the IFFB takes place December 1-9 at the Aupark Palace Cinemas, and contains over 200 features, documentaries and shorts divided into ten distinct categories, including Made in Europe, Off the Mainstream, Santa Claus: Films for Children, and Slovak Films 2006.

Many of the films have already won prizes at the Cannes, Venice and Toronto Film Festivals, among others, or received wide acclaim in their home countries.

So if you're planning on trying to see all the great movies the festival has to offer, bring a sleeping bag. You're in for the long haul.

The festival's main event is the International Competition of First and Second Feature Films, which is made up of debut films by largely unknown directors.

"The IFFB, perhaps wrongfully, overlooked this kind of content during its first few years because the directors are generally unknown," section coordinator Peter Nágel said. "Now, the situation is totally different. Every major festival has a competition of best debut movies, and getting works by rising talents is just as difficult as getting those by renowned masters."

The section opens with 4:30, a film by young Singaporean director Royston Tan. A character study that one reviewer compared to Camus's The Stranger, 4:30 is a detailed portrayal of four days in the life of Zhang Xiao Wu, an eleven-year-old Chinese boy, who forms an unlikely bond with Jung, an emotionally detached thirty-year-old Korean.

"Unlike Tan's previous film, 4:30 is slow and mellow ... [yet] never becomes tedious, as it draws attention to its characters' every detail and action with terrific direction," reviewer Justin Deimen wrote. "With only a handful of instances in which dialogue is used, the sound design had to be impeccably effective to get the emotions across."

Set in a small Swedish town dominated mostly by senior citizens, the story focuses on a group of young men, played by non-professional actors, pondering what to do after finishing high school. They know their town holds virtually no opportunities, but consider leaving a betrayal, so they decide to stay, dooming themselves to days filled with drinking and the slow passage of time.

"There's something entirely new about this film," Steve Gravestock wrote for the Toronto International Film Festival. "It seems to find its form before our eyes, just as the characters stumble toward decisions about their lives."

Arguably the section's most acclaimed film is 12:08 East of Bucharest, a feature by Romanian director Corneliu Porumboiu that won the Golden Camera (Best Debut Film) Award at the Cannes Film Festival 2005.

The film is about the Romanian Revolution of 1989, but is set in the present day.

"I got the idea from a televised debate I saw five years ago in my hometown of Vaslui, in eastern Romania," Mr. Porumboi said in an interview with Directors' Fortnight, which accompanies the Cannes festival. "The question of the day was: did our town take part in the revolution?"

That question is examined through the story of a TV station owner who commemorates the revolution by interviewing two local heroes, Manescu, a drunkard history teacher, and the elderly retiree Piscoci. But as viewers call in with alternative recollections of that day, the heroes begin to look like exaggerators, and the whole community erupts in a discussion of who from their little town, so far from the capital, really took part.

"This fascinating, whimsical film aptly conveys the nagging suspicion held by those living outside the seats of power that they are doomed to be bystanders rather than participants in the tumult of politics that seems to grip only their capitals," film aficionado Dimitri Eipides wrote. "12:08 East of Bucharest is hilarious, smart and refreshingly realistic about the ways memory and mythmaking can mold historical truth."

Moving on to the Made in Europe section, Paris, je t'aime is a compilation of eighteen short films made in tribute to the magical feeling of Paris. The shorts are directed by some of Europe's leading names, including Tom Tykwer, Isabel Coixet and Alfonso Cuaron, and acted by stars such as Willem Dafoe, Nick Nolte, Natalie Portman and Juliette Binoche.

One of the film's vignettes shows actor Ben Gazarra and actress Gena Rowlands as an elderly couple that finds that last spark of hidden romance when they meet in a café to finalize their divorce. Others are comical, such as director Alexander Payne's story of an American tourist, played by Margo Martindale, who wanders Paris with broken French as part of an assignment for her adult education class back home.

Also stirring up the Made in Europe section is The Wind that Shakes the Barley, the riveting new film by British director Ken Loach that won the prestigious Palme d'Or Award at Cannes this year.

Always political and often controversial, Loach and his regular screenwriter Paul Laverty constructed a story around the Easter Rising of 1916, when Irish republicans launched a six-day rebellion aimed at gaining independence from England.

The story involves Damien and Teddy, friends who join a guerilla unit of the Irish Republican Army after the murder of a mutual friend.

Though entirely historical fiction, the film is blunt in its depiction of the brutality of the British military in Ireland at the time.

"Loach's aim is to turn the political into the personal - to spin national tragedy into local tragedy," Dave Calhoun wrote for Time Out London Magazine. "There's nothing disingenuous about [it]. [Loach] is a socialist; he's a critic of oppressive governments; he's concerned with the politicization of the people; he's a chronicler of lost political opportunities. His argument - whether you agree with it or not - is clear and honest."

The IFFB will also dedicate a special section to profiling the films of British director Michael Winterbottom.

Winterbottom gained recognition right after his debut film, Butterfly Kiss, hit theatres in 1995, though it gained only limited release due to its story of an unbalance lesbian serial killer. One of his next films,

Jude, based on the scandalous 19th-century Thomas Hardy novel Jude the Obscure, earned him a screening at Cannes and offers from Hollywood, though he turned them all down.

In 2002, he won a Golden Bear at the Berlin Film Festival for In this World, a road movie about Afghan refugees trying to get to England with the help of smugglers.

But it is perhaps Welcome to Sarajevo, filmed in the title city within months after the NATO-led bombing campaign there had ended, and The Road to Guantánamo, about three British Muslims imprisoned as enemy combatants at the US Naval Base in Guantánamo Bay, Cuba, that typify what many consider to be Winterbottom's instinct for the gritty docudrama style.

"The times when we only marginally understood who Michael Winterbottom was, or when we could only vaguely differentiate his style from that of [Danish director Thomas] Vinterberg are gone forever," said IFFB section coordinator Zita Hosszúová. "In the past several years, almost every important film event mentions Winterbottom as one of the most remarkable British directors of the turn-of-the-century film generation."

All films at the IFFB will be presented in their original version with simultaneous Slovak translation. Most non-English language films will have English subtitles, as well as a simultaneous translation into Slovak.

For more information on the festival's films and ticket prices, visit www.iffbratislava.sk or call 02/6820-2222.