THE FIRST Slovak football referee to speak publicly about corruption in the game has spilled the beans with a vengeance, alleging that bribery is rampant at all levels of the game. 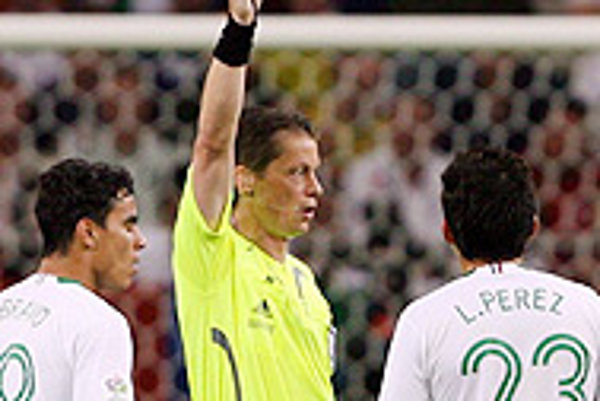 Font size:A-|A+  Comments disabled
THE FIRST Slovak football referee to speak publicly about corruption in the game has spilled the beans with a vengeance, alleging that bribery is rampant at all levels of the game.

Marián Diňa, 35, who spent seven years until 1998 refereeing games in the fourth and fifth football divisions in the east of the country, responded to a challenge by the Nový Čas tabloid daily for someone to come forward with first-hand knowledge of corruption and give the authorities concrete information on which to act.

"In every single game there were at least two or three thousand [crowns] flying around," he told Nový Čas in an interview published November 22. "Every single game. In seven years, I experienced maybe five games in which I received only my official referee's pay."

Diňa admitted to having taken bribes himself. "The rule was that you would get Sk5,000 for [fixing] a home match and Sk10,000 for an away match," he said, adding he had even taken money to influence the outcome of matches between children. "I felt bad, and I felt sorry if there were kids involved, but I did it anyway.

"On Monday the [east Slovak daily] paper would be published with referee assignments, and on Tuesdays the club owners would already be visiting our apartments, throwing around enormous figures, even Sk15,000."

Diňa said the money would typically be divided into five parts, with the linesmen, the referee and the football association delegate receiving equal parts, and the delegate and the referee splitting the fifth part.

"The public has to know the truth," he said in explanation of his decision to come forward.

Following the publication of Diňa's charges, the police Anti-Corruption Unit began an investigation, and summoned the whistle-blower himself for a three-hour interrogation on November 27. Diňa handed over written records he had kept of bribery in games from 1990 to 1998, in which dozens of people were implicated. So far, no charges have been laid, and Diňa is appearing in the case as a witness.

The investigation was expected to be complicated by the fact that the statute of limitations on bribery cases according to the law valid in 1998 is five years.

Diňa's charges ring a bell with many Slovak football fans, given recent "curious" match results such as the Petržalka - Trnava game on October 29, which Trnava won 2-1 and kept alive its chances of remaining in the premier league after most of Petržalka's best players spent the entire game on the bench.

Even Slovakia's most famous referee, Ľuboš Michel, who regularly officiates at world-class international football matches, hasn't escaped suspicion. Michel was suspended for five games on November 24 for "mistakes" made during a match between Bratislava Slovan and Trnava, in which he awarded a late-game penalty that gave Trnava victory.

Reactions to Diňa's testimony from football officials varied from angry denial to bitter agreement, and, in the case of the football association, a suggestion the situation was not as bad as Diňa had made out.

"If there is any evidence, we will punish those involved harshly," said František Laurinec, president of the Slovak Football Association (SFZ), before continuing: "I don't want to belittle the confession of Mr Diňa, but let's not make the practices of one region into something national. His confession has actually helped us, because it has stirred stagnant water. It was the first wave. But let's all take care that this wave doesn't become a tsunami that puts football back where it was 10 years ago."

The tsunami that Laurinec seems intent on avoiding has not followed previous "first waves", however. In mid-2005, a Bratislava think-tank called the Institute for Economic and Social Reforms (INEKO) published a survey of the owners and CEOs of 228 football clubs around the country in which 46 percent of respondents said they had personally encountered corruption in the game, and 35 percent that they had heard of incidents of corruption. Only 19 percent said they had not encountered corruption in the past five years, and only 6 percent believed that bribery was not a regular practice in their league.

"From the survey it appeared that the lower the league, the greater the corruption," said Peter Goliaš from INEKO, adding that even these stark figures had not moved the SEZ to act. "After we published the results, they distanced themselves from corruption, but they did not offer any cooperation or take any steps against bribery."

Following the publication of Diňa's interview, Laurinec filed a criminal complaint for bribery with the Prešov region prosecutor's office, saying the SFZ has no tools of its own to uncover corruption. The East Slovak Football Association has also said it will wait for the results of a police investigation before acting.

However, there is little agreement among the leading figures in the game as to how serious the problem of match-fixing is.

Laurinec said that corruption was "a very sensitive issue", but in an interview with the Sme daily urged on several occasions that "we have to be careful not to throw the baby out with the bathwater", that "we mustn't launch a witch-hunt", and that "let's not turn football into a sewer".

However, another SFZ executive, general secretary Dušan Tittel, said he was quitting his post at the end of the year "because my opinions on the direction Slovak football is taking differ from those of other members of the [SFZ] executiveÖ I regret that people exist in Slovak football who offer and take money, and I would be happy if such cases were investigated fully, however long it takes."

Another reason that Tittel cited for his departure was the beating in May this year of Igor Šramko, the chairman of the referees' commission with the SFZ. Šramko, who had made fighting corruption a priority since being elected to his post in February 2006, wound up in hospital with broken ribs and a fractured skull. After the attack he resigned his post; police shelved their investigation in October without finding the culprits.

Football in Slovakia has been linked to organized crime since the early 1990s, perhaps most famously with the presence of Bratislava mob boss Jozef Svoboda in the executive of Bratislava's Slovak football club. To this day, journalists still ask Slovan club officials what happened to money paid to Slovan for player transfers in the 1990s.

The dubious source of some clubs' financing has long been tolerated at the highest levels of Slovak society, however. Asked in September by the aktualne.sk news server if the presence of the mafia in football bothered him, Slovak President Ivan Gašparovič said "if not for such people there would be no football".

In a similar way, corruption and bribery have for years been an acknowledged but accepted part of the game at field level. "It isn't possible not to fight corruption at all, but we fight it very weakly," said František Chmelár, the chairman of the Slovak Olympic Committee. "The football association can't handle the problem on its own, because that which corrupts is so intertwined with that which is corrupted that only a radical approach can provide a way out."

According to Chmelár, the problem was not confined to club owners with fat wallets and no scruples, but was deeply ingrained among players and referees and in the culture of the game itself. "These days, every club owner in a village league knows that if he doesn't give the referee a few crowns, he will be at a disadvantage. And if he says it openly, he is finished in football, maybe worse."

A club owner interviewed by the Sme daily explained further. "If you don't pay the referee, he will do such a bad job of handling the match in the first half, such as by giving your players yellow cards, that you will have to pay him a visit during the break and promise him some money. Or he might write your club up in his game report, inventing incidents in which he was kicked or threatened or had beer thrown on him, with the result that the fine the SFZ gives you is higher than the bribe would have been.

"So in the end it's better just to give them the money from the start," said the club owner, who asked not to be identified.

Several team coaches also came forward to support Diňa following his confession, including Eduard Kniežo of Sobrance (Division IV): "What Mr Diňa said is just the tip of the iceberg, and anyone who calls him a liar is a coward."

"He showed a lot of guts in saying what he said, and I believe him," agreed Pavol Šeleng, the coach of Spišské Bystré (Division V). "The football association leadership knows it as well, but they are just closing their eyes to it."

But many were skeptical as to whether Diňa's allegations would actually help clean up the game.

"It's always difficult to investigate something and punish people if you don't have proof," said Slovak Miroslav Karhan of Wolfsburg in the Bundeslige. "Especially given that this has come out so late in the day."

Ladislav Jurkemik, the coach of Bratislava Inter in the premier league, said that it was up to the police financial crimes unit to act, as they had in Italy and Germany in busting match-fixing in those countries.

"Corruption not only exists in our game, it's getting worse," he said. "It makes me sad, but at the moment these people are untouchable. I don't say that all referees are involved in match fixing, but most of them are.

"Neither us coaches nor you journalists can expose it. We don't have the tools. For that we need the financial police in Slovakia as well."

"I don't know why he hesitated and waited so long [before speaking out]," said Ján Tomčík, head of the Referees Association with the SFZ. "He should have reported this information while he was refereeingÖ otherwise he was only helping it [corruption]."

Tomčík added that he had never encountered corruption personally, nor had he ever hread of its existence. "I don't know about any [bribery]," he said.