ATTORNEY Ernest Valko and entrepreneur Ladislav Rehák will not be remanded in pre-trial custody while police investigate their alleged extortion of another two individuals, the Bratislava Regional Court ruled on November 27. 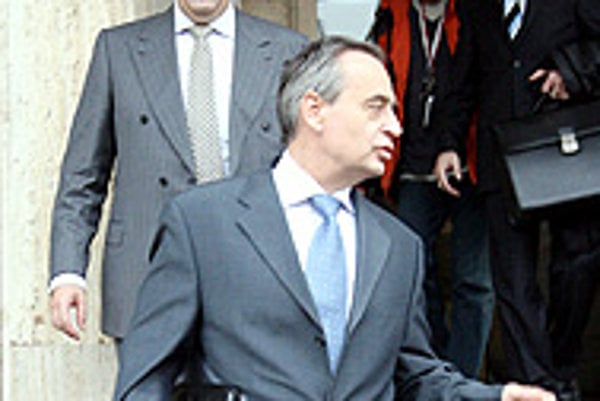 Font size:A-|A+  Comments disabled
ATTORNEY Ernest Valko and entrepreneur Ladislav Rehák will not be remanded in pre-trial custody while police investigate their alleged extortion of another two individuals, the Bratislava Regional Court ruled on November 27.

In her ruling, Justice Alžbeta Horváthová rejected the argument of a state prosecutor that the two men could continue to commit crimes if allowed to remain at large.

"The proposal [for pre-trial custody] is not based on anything," Horváthová said in her ruling, "probably because it would be difficult to find such reasons."

The justice added that the written evidence against Valko "is probably the work of a mentally ill person", without explaining her observation.

One of the pieces of evidence against Valko is a letter written by the attorney's former client, businessman Tobiáš Loyka, who has been fighting an unsuccessful court battle for years over a peat company, and is currently in pre-trial custody on charges he intended to murder the bankruptcy trustee of the peat company and another three individuals.

Loyka wrote in his letter: "Valko is my enemy, he blackmailed me." It was on the basis of this letter that Valko stopped representing Loyka.

The Regional Court also said that the evidence against Rehák was minimal, and that it saw no reason to remand him in custody.

Valko and Rehák were arrested on November 15 and charged the next day with extortion. The two men claim that a firm Rehák hired to purchase land for him in the Záhorie region, belonging to the Vittek family, siphoned off Sk15 million in funds. Rehák claims that when he discovered the fraud, he demanded the men return the money, and that he and Valko accompanied the Vitteks to the office of a public notary where the Vitteks signed a statement acknowledging the debt.

However, the Vitteks later claimed that Valko and Rehák had extorted the money by threatening to turn to the police if it was not returned. They said they were subjected to mental blackmail, and suffered mental anguish.

Although state prosecutors generally supervise the work of the police, during the Regional Court case Prosecutor Iveta Kopčová pointed out several mistakes the police had made, principally the fact that detectives had not acted when the Vitteks first filed a criminal complaint in July. "The case investigator didn't do anything, and I don't know what the reason was," she said, adding that it could complicate the current investigation.

Justice Horváthová agreed that the work of the police had been flawed. "The greatest mistake was that the organs responsible for preliminary proceedings did not fulfill their duty to start an investigation without delay," she said.

The police allegedly also made mistakes during the search of Valko's law offices by seizing computers and files that had nothing to do with the current investigation, such as documents pertaining to a multi-billion promissory notes case involving the SPP gas utility, and video cassettes from the Mojsejovci reality show on the Markíza TV station.

Representatives of the Slovak Bar Association who were present at the search complained that the police had broken the law. "In their approach, criminal law enforcement organs violated the Advocacy Act, the duty of client confidentiality, and the Act on the Protection of Personal Data," said the SAK's Ján Havlát.

While the police maintain that no laws were broken during their search, a similar case that occurred in Finland at the end of the 1990s resulted in a verdict condemning the police approach.

The office of Finnish lawyer Petri Sallinen was searched by police in March 1999, during which his hard disks were copied and data relating to 17 clients seized. Sallinen and his clients turned to the European Court for Human Rights, which in December 2005 ruled that the Finnish criminal justice system had not offered them the legal protection they were required to in a state ruled by law.

Ernest Valko is the former chief justice of the Czechoslovak Constitutional Court, and represented a number of government ministries and officials during successive Mikuláš Dzurinda administrations from 1998-2006.

Ladislav Rehák is an equally prominent entrepreneur who was the largest individual sponsor of the opposition Christian Democrats party from 2002 to 2005, donating Sk2 million in funds.