Scaring off dark forces with a goose's wing

IN THE RURAL parts of Slovakia, the arrival of autumn and early winter once meant it was time to complete all your work on the field and prepare for the oncoming season. As this provided more time for family and social life, traditions were developed that focused on attracting prosperity, happiness and health, and warding off the dark forces talked about in ancient folklore and superstition. 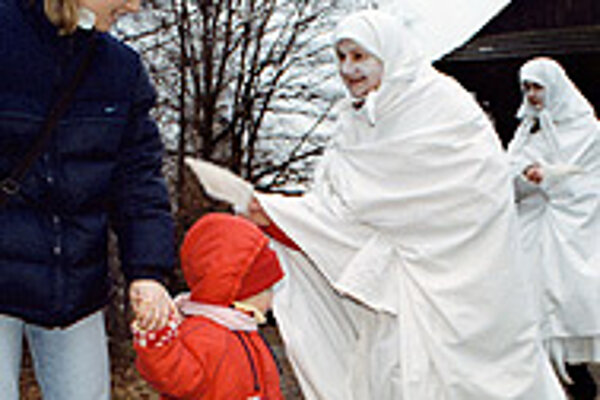 Font size:A-|A+  Comments disabled
IN THE RURAL parts of Slovakia, the arrival of autumn and early winter once meant it was time to complete all your work on the field and prepare for the oncoming season. As this provided more time for family and social life, traditions were developed that focused on attracting prosperity, happiness and health, and warding off the dark forces talked about in ancient folklore and superstition.

Between the end of November and the Winter Solstice, which people long ago regarded as the beginning of a new era, it was thought the powers of good fell victim to the powers of evil, which drew increased strength from the extended night hours. In Slovakia, this period became known as the Witches' Days. Special items were invented and rituals developed to protect against supernatural powers. The days also became closely connected with weather predictions.

The first of the Witches' Days was St. Katarína's Day, which fell on November 25. On that day, people ate garlic and crossed it at their doors. Also, it was believed if the temperature on this day were above zero, there was a chance of snow on Christmas.

This year, St. Katarína's Day was so warm, ski resorts in the High Tatras had to temporarily shut down due to melting snow. Thus, if our ancestors are right, we should expect sub-zero temperatures on Christmas.

The predictions made on St. Ondrej's Day, November 30, were of a lighter nature, and focused on the future love lives of the young women in the village. One of the rituals involved the ladies casting melted lead or wax into water via a key loop. They then guessed the occupation of their future love from the shape when it solidified.

In another ritual, the girls wrote the names of potential suitors onto small pieces of paper and put them into pirohy, pies, that were then cooked in boiling water. Whichever name rose to the surface first was said to be that of the boy she was destined to marry.

The next of the Witches' Day was St. Barbora's Day, December 4. That day, young and married women, and sometimes men, wrapped themselves in white clothes and covered their faces in flour to sweep negative energy away with a goose's wing, or a rod. Young women also used that day to cut a stick from a cherry tree and put it in water. They believed if the stick flowered by Christmas, they would marry within a year.

The traditions of St. Mikuláš (Nicholas), known for walking the village accompanied by a devil and angel while giving good children nuts and sweets and bad children chunks of coal, are still celebrated today.

The last of the Witches' Days was St. Lucia's Day, which occurred on December 13. It was by far the most important, since Lucia was considered to be the greatest witch, who survived attempts to burn her at the stake. On this day, villagers often renewed their efforts to scare dark forces away, with garlic once again playing an integral role. In some regions, the tradition with the goose's wing was repeated. Or, young men manufactured small wood tables with a hole in them. Whoever looked through the hole during the midnight mass would see which women in the village were witches.

People also used to predict the next year's weather based on the twelve days from St. Lucia's Day to Christmas. Each day represented one month in the next year. Therefore, what the weather was like on a certain day could be expected during the corresponding month of the next year.