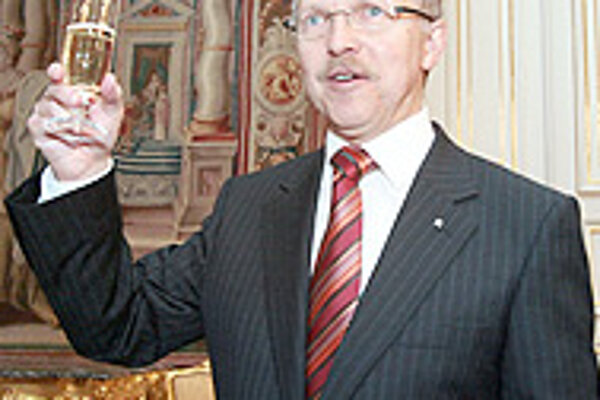 For Ďurkovský, however, his victory was not part of a voting pattern among urban residents nationwide, but was the result of "the decisions of reasonable voters.

"The inhabitants of Bratislava are very reasonable voters; they understand municipal politics, they are interested in local affairs, and they do not base their beliefs on empty promises," he said shortly after his re-election.

Ďurkovský gained total of 67,097 votes, some 27,000 more than runner-up Monika Flašíková-Beňová of the left-wing Smer party.

Over the next four years, Ďurkovský, who was supported by a right-wing coalition consisting of the Christian Democrats and the Slovak Democratic and Christian Union (SDKÚ), will be working with a right-wing municipal council. Of the total 78 councillors, 57 are members of the SDKÚ.

Ďurkovský spoke to The Slovak Spectator about his plans for Bratislava during his next term on December 6.

The Slovak Spectator (TSS): Your main competitor, Monika Flašíková-Beňová, finished 27,000 votes behind you in the election. Were you surprised?

Andrej Ďurkovský (AĎ):I was very pleased by this fact. I thank the citizens of Bratislava for their trust in me because this is how they thanked me for my work and the work of my team at city hall over the last four years.

TSS: In several larger cities, voters chose new mayors rather than sticking with the old ones. Why didn't this happen in your case?

AĎ: It showed that the inhabitants of Bratislava appreciate the projects that we carried out and that they want us to continue in our work. I believed that the inhabitants of Bratislava would appreciate the fact that we built 250 municipal flats, we built the Apollo Bridge, we expanded the riverbank road, we reconstructed the tram line on Obchodná Street [in Old Town], we repaired historical sights such as the Old Town Hall, Klarisky Hall, the Vodná Priekopa [Water Dam] in the historical centre of the city, and that we also built a modern office which includes workplaces specifically meant for communicating with citizens. I could go on. Above all, I think people have the sense that what speaks for politicians is their concrete work.

TSS: What makes Bratislava such a right-wing city?

AĎ: As a rule, large cities lean to the right because they are usually among the richest regions in every country. Bratislava is no exception. Although we in Bratislava think that our Sk6 billion budget is not sufficient, given that it is the budget of the capital city, Bratislava really is rich compared to other regions in Slovakia. People living here have plenty of job opportunities, they can make good money and they can also afford to spend it. They not only have enough to cover their living expenses, but they also earn something extra.

On the other hand, I don't think that municipal politics is about right-wing or left-wing ideologies. People know their municipality well, and they can tell very well who is promising realistic things and who is just making empty promises.

TSS: Speaking of promises, what do you have planned for the city?

AĎ: My highest priority is transportation, the modernization of the city transit system (MHD). We want to continue purchasing new city buses and trolleybuses, we want to build a tramline to Petržalka, and then also buy modern trams. We want to expand our network of roads, which are desperately needed, and at the same time encourage people to prefer the MHD [over using their cars, ed. note] and build further trolleybus lines. In short, we want to focus on the long-term pro-environmental nature of the MHD.

TSS: Apart from problems with transportation, Bratislava is seeing a lot of development and real estate investment, and at the same time does not have a master plan. How do you intend to control this development and ensure that the new buildings that go up in the city fit in to a unified planning concept?

AĎ: Although it may look like it to some people, no buildings are built in Bratislava without proper planning. The existing master plan is still in effect, and was recently update, meaning that construction projects are regulated.

Of course, this regulation is not sufficient, and that's why we prepared a new master plan for approval. The new plan is on a smaller scale than the current plan, and will ensure that construction in the future is even more regulated. We have prepared several land-use plans that increase regulation, especially in the city centre and the historical core. We are also preparing stricter regulations for high-rise buildings.

TSS: How do you plan to handle illegal buildings?

AĎ: Each city district is responsible for taking action against illegal construction, as the powers of the former construction offices have been transferred to them. However, the current legislation does not enable them to knock down buildings that were erected illegally, and they lack "construction police" [who would perform unannounced inspections of building permits]. We will continue to deal with these problems, and I will be happy if we manage to bring in stricter rules in this area.

AĎ: I am a native of Bratislava, and I value the city and have respect for its history and the traditions that it embodies. I think its power is in this tradition, in its spiritual values, which are a good foundation for its development. For ages, the major advantage of the city was its geographical position at the confluence of two rivers [the Danube and the Morava]. It was a major business route and all this is reflected today in the current interest of investors in the area, which is close to Vienna, as well as in the growing numbers of tourists coming to the city.

What does not please me about Bratislava is the deficit in its development, which is something that the whole country suffers from our past. Among other things, we do not have adequate solutions for our transport situation - we do not have a subway, our roads aren't big enough, and we lack other quality logistical assets. This deficit cannot be made up as quickly as I originally believed.