LESS THAN a week after the Supreme Court confirmed jail sentences for six men accused of raping and murdering young medical student Ľudmila Cervanová in 1976, a pair of witnesses who saw Cervanová getting into a car with men who did not resemble the accused have come forward.
cannot be appealed, but were turned away. 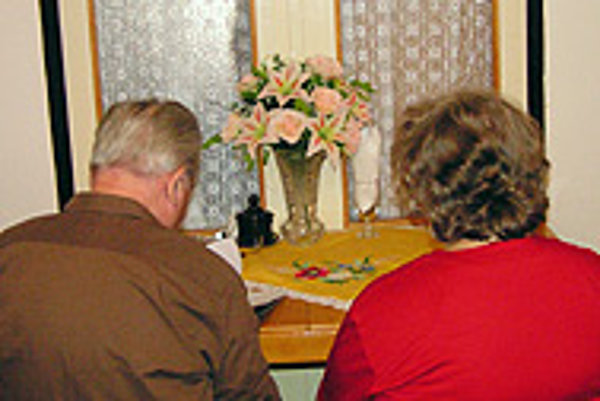 Font size:A-|A+0
LESS THAN a week after the Supreme Court confirmed jail sentences for six men accused of raping and murdering young medical student Ľudmila Cervanová in 1976, a pair of witnesses who saw Cervanová getting into a car with men who did not resemble the accused have come forward.

In an exclusive interview with The Slovak Spectator, a Bratislava husband and wife in their 60s, Veronika and Jozef B., told the newspaper that what they had seen on the night of July 9, 1976 conflicted with the court's verdict.

They also said they had tried to deliver the information to the Supreme Court before it delivered its ruling, which cannot be appealed, but were turned away.

As The Slovak Spectator has reported, the Supreme Court on December 4 confirmed the verdict of a lower court sentencing six men from Nitra for the Cervanová crime, and even raised the jail time of three of the men. Miloš Kocúr and Milan Andrášik had their sentences increased from 13 to 15 years, and Stanislav Dúbravický from 10 to 12.

At the same time, the court failed to take into account 8,000 pages of witness statements and other evidence that police collected from 1976 to 1981, but that was later hidden in a police archives in Levoča, and only rediscovered in 2004. The court decided that it had enough evidence to be sure of the men's guilt without reviewing the additional files.

Veronika and Jozef B. have already once given evidence in this case, on August 23, 1976. Their statement forms part of the ignored Levoča files, although it was not until they recently saw a report on the JOJ TV station featuring defense attorney Allan Bohm that they thought their testimony might prevent a miscarriage of justice.

"On the TV footage we saw excerpts from our witness statements," said Jozef B. "So I decided to testify again. On Thursday, November 30, I went down to the Supreme Court, and the doorkeeper called the court spokeperson, Eva Rupcová, for me. She told me over the phone to wait, and said she would ask the chairman of the senate [the head of the panel of judges ruling on the appeal]. After a few minutes she called me back and said that the chairman had said the giving of evidence was over, and that if I had anything new I should go to the police."

Jozef B.'s words were confirmed for The Slovak Spectator by Rupcová. When the newspaper contacted the chairman of the senate, Štefan Michalík, on his mobile telephone on December 14, he hung up.

"I don't have too much faith in the police," Jozef B. continued, "so I went to the Attorney General's Office. They told me that they would call me, but to this day no one has."

Jozef and Veronika described the night Cervanová was murdered for The Slovak Spectator. They said they remembered the date, because it is Veronika's birthday. The pair were waiting for a bus in the Mlynská Dolina student complex around 22:00, after having brought flowers to the nearby grave of their son.

"We could hear the music from the disco near the student hostel at the grave," said Jozef. "It was dark, a little before 10 at night, and we decided to take a bus home. We just missed one, and ended up waiting until about 22:30. About 22:15 we noticed a young girl with a big travel bag walking along the sidewalk. She was very pretty, about 20 years old."

The girl stopped to talk with Veronika. "She asked me if we had seen the bus leave, because she was in a big hurry. She said she was traveling to Košice, and she was afraid she wouldn't catch the last train. She told me that if she saw a car she would try and hitchhike to the train station," Veronika B. told The Slovak Spectator.

Veronika, Jozef and the girl continued to wait at the bus stop, along with two or three other people - young girls going home from the disco, and a drunk man who kept shouting.

Another witness questioned by police, who lived in a nearby house, also said he had heard male shouts on the night Cervanová was murdered.

Just before 22:30, a two-door Volkswagen "beetle" approached the bus stop from a road that led out of the parking lot near the student hostel. The car was travelling slowly and had only its parking lights on. "It stopped a few metres from the bus stop, heading in the direction of the town", said Jozef B. "I don't know if the girl flagged them down or whether they stopped of their own volition. But I noticed that the passenger sitting by the driver had an open window."

The girl approached the car, and spoke briefly with the occupants, whom Jozef and Veronika described as three men. The man in the passenger seat then got out of the car to move his seat forward, holding the door while the girl put her bag in the back and took a seat herself. "We saw them the whole time this was happening, because the interior car light was on while the door was open," said Jozef.

"All three of the occupants of the car had dark skin. It was clear that they were not from our country, not white. They were Arab or black. The one who got out of the car was tall, dark-skinned, with short dark hair. After the girl got in, he put the seat back and got in himself. The car moved off slowly."

Veronika said she had thought it was strange that even though the car was headed to town, it had not turned on its headlights. For that reason, she says, she wrote down the license plate number on a piece of paper. "It started W 24, or 25, I didn't see any more. But it had Austrian plates, from Vienna. The girl got in the car of her own free will."

Jozef added that during the entire 40 minutes the couple waited at the bus stop, no one else left the student hostel, where Cervanová lived.

The colour of the skin of the culprits is significant not only for their identification, but also in terms of a possible motive. Cervanová's father, Colonel Ľudovít Cervan, had been the Czechoslovak military attaché to Syria and Saudi Arabia. At the time his daughter was murdered he was posted to a secret military base in Piešťany where he taught pilots from mainly Arab countries how to use weapons electronics on fighter jets.

When the couple noticed a police appeal, several weeks after the night in question, for anyone who knew anything about the kidnapping and murder of Cervanová to come forward, they recognized the victim, and decided to testify. They both had statements taken. Veronika was even shown a photograph of the corpse, which police claimed was Ľudmila Cervanová, although Veronika said, unlike the autopsy report, that the face of the victim was horribly bruised, not swollen from days of immersion in the water.

"She was just a mass of bruises. She wasn't cut up. One policeman also told me she had been found dumped beside a creek, not in the water [as the prosecution claimed]. I couldn't sleep for years afterwards, and I kept seeing that face in front of my eyes. The only thing that told me it was her was her long black hair."

Two weeks after giving evidence, Veronika was leaving a church with her year-old son and an older neighbour. Two men in suits suddenly grabbed her arms and pulled her into a car, claiming that they were police, and that she would have to give evidence again. "I asked them, what kind of police are you?" Veronika told The Slovak Spectator. "If you want to interview me again, come to our place, because I can't leave my son in a baby carriage on the sidewalk."

As people from the church gathered around the car, Veronika says, she managed to open another door and escape. The men did not pursue her.

Two years later, in 1978, Veronika was working for the post office when she received a visit from a policeman who told her not to interfere with the Cervanová case, or she would be sorry. Both she and her husband henceforth stopped concerning themselves with what had happened to their testimony.

"We expected to be called to testify in court, but no one called us," said Jozef. "So we left it at that. My wife was scared."

Break in the case

The six men from Nitra were originally found guilty of the kidnapping, rape and murder of Cervanová in 1982. In 1990, however, the federal Czechoslovak Supreme Court overturned the verdict and returned the case to a lower court for retrial, citing 72 procedural errors that had been made in the original proceedings.

Jozef and Veronika B. said they hoped that the verdict would mean a fresh start for the Ľudmila Cervanová case, but the courts failed to perform any additional measures to secure new evidence. "Sixteen years went by and nothing happened," Jozef said.

Following his recent failure to interest the Supreme Court with his evidence, Jozef B. contacted The Slovak Spectator, saying his conscience would not allow him to remain silent, even though it might be too late, given that the Supreme Court verdict was final.

International human rights groups and media, including the Austrian ORF station, have begun taking an interest in the case since the December 4 verdict, while defense attorney Bohm says he will turn to the Slovak Constitutional Court and the European Court for Human Rights in Strasbourg for redress.

"For me, the fact that 8,000 pages of evidence were found in the Levoča archives is proof that the investigation of the murder of Ľudmila Cervanová was grossly manipulated from the beginning," he said for The Slovak Spectator.

"Evidence was secured that the organs in the criminal justice system knew about, and that they in all likelihood withheld deliberately from the courts."