HZDS wants new ministry, "or something else"

THE MOVEMENT for a Democratic Slovakia (HZDS), a junior partner in the ruling coalition, continued its struggle for greater influence in government with a suggestion that a new ministry be set up next year that might be led by a HZDS nominee. 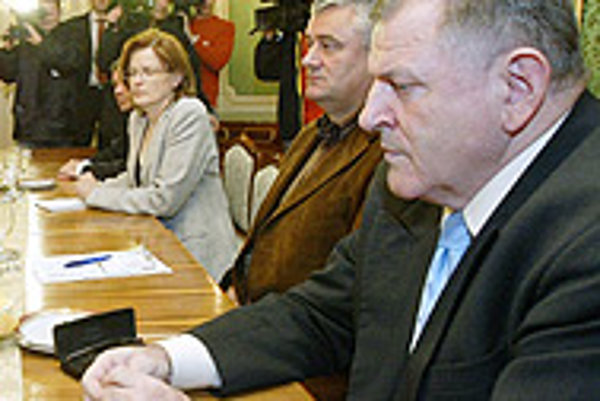 Font size:A-|A+  Comments disabled
THE MOVEMENT for a Democratic Slovakia (HZDS), a junior partner in the ruling coalition, continued its struggle for greater influence in government with a suggestion that a new ministry be set up next year that might be led by a HZDS nominee.

This new ministry, whose creation was not discussed before the idea was presented during the recent parliamentary budget debate, would deal with issues related to tourism, HZDS Deputy Chairman Viliam Veteška told the press.

Although Veteška spoke of the idea as something that had already been agreed on by the coalition partners, the reactions that followed contradicted this.

The Finance Ministry, which is responsible for drawing up the country's budget, said it had received no news that a new ministry would be established next year, and therefore had not included the related expenditures in the 2007 draft budget.

Veteška's news was also surprising given that PM Robert Fico's coalition has pledged up to 20 percent staff cuts in the state sector to save money and help prepare Slovakia for euro adoption in January 2009.

HZDS leader Vladimír Mečiar himself cast further doubt on the proposal on a December 10 talk show broadcast by the private Markíza TV station. "Of course it is possible to consider a new ministry," he said, adding that "although tourism was discussed, no decision has been made so far that it really will be tourism. It could also be something else."

Analysts believe that the HZDS is using the idea of the new ministry to boost its influence in the coalition.

"Mečiar's fight for greater power within the coalition is behind this," said Grigorij Mesežnikov, the head of the Institute for Public Affairs think-tank.

"This is part of a logical effort by the HZDS to strengthen its position in the coalition, which really does not correspond to the party's election results.

After the [June 17] elections, Mečiar wanted to get his party into government at any cost, and accepted all the conditions that were laid out by Smer [the main ruling party]. Now he realizes that his party's position is not proportional to its power," Mesežnikov said.

According to the agreement signed by the coalition partners, the HZDS is currently entitled to nominate its people to 2 ministries, while the Smer party holds 11 ministries and the Slovak National Party (SNS) has 3 posts in cabinet.

However, according to Veteška, who is seen as a likely candidate to lead the new ministry, the party did not insist that the new ministerial post should belong to the HZDS. "The new minister should primarily be an expert [in the field]," Veteška said.

Mečiar has complained repeatedly that his party is not satisfied with its current position in government, and said that the new post would give his party more influence in the ruling coalition.

Even though it has 16 MPs, the HZDS has only 2 ministers in government, while "Smer has one minister for every 4 MPs", the HZDS leader complained.

"This is obviously disproportionate," Mečiar said.

Ever striving to increase his power within the coalition, Mečiar managed to lure MP Miroslav Kotian from the SNS to join the HZDS last month. Kotian cited a lack of democracy within the SNS as the reason for his departure.

PM Fico has also recently made some concessions to Mečiar, such as accepting HZDS nominee Igor Urban as the head of the Security Council, which manages crisis situations, including natural disasters.

The HZDS originally wanted Urban to be the deputy director of the Slovak Information Service (SIS), but this nomination was rejected by SIS Director Jozef Magala, a Smer appointee. Urban was the head of the parliamentary Special Oversight Committee for the SIS in the 1990s during a period when the secret service was suspected of kidnapping the president's son and murdering a key figure in the ensuing investigation.

Fico also allowed Mečiar's nomination of an infamous privatization-era corporate manager, Július Rezeš, to the board of the Transpetrol state firm to stand.

However, Mečiar's demand of a new ministry, as well as the refusal of the party in parliament on December 13 to allow its government partners to share power in the National Security Bureau, which it controls, shows that the HZDS' appetite for greater influence has not been satisfied.

"Our influence within the coalition is too small," Mečiar said on the Markíza talk show.

Mesežnikov noted that within the ruling coalition, the HZDS is "a party that is dying out", and that Mečiar is under pressure to boost its voter support.

"There is a concern within the HZDS that voters will tend to attribute the successes of the current coalition to Smer rather than to the HZDS or the SNS. The HZDS has to deal with this issue as well," Mesežnikov said.

According to Marián Leško, a political commentator with the Sme daily, Fico must have known what he was getting into when he invited Mečiar to join his new coalition government.

"He wanted a Mečiar, and now he has one," Leško wrote.