Hanukkah, a festival of celebration and thanks

LAST WEEKEND, just days before thousands of households across Slovakia are to start cooking carp and sour cabbage soup for Christmas dinner, the country's Jewish community began frying latkes, a kind of potato pancake, and lighting menorahs for Hanukkah, the festival of rededication. 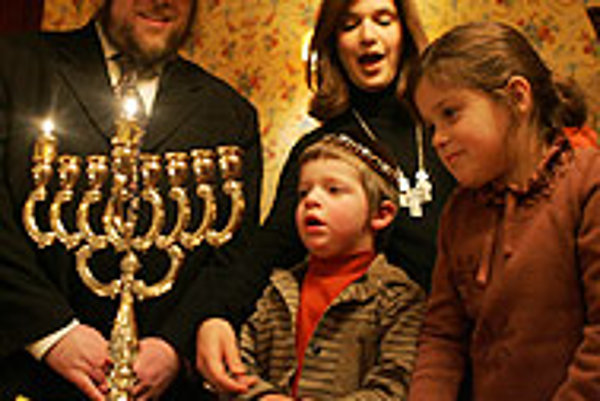 Set over eight nights, from sunset on December 15 to sunset on December 23 this year, Hanukkah is a celebration of a miracle that occurred centuries ago. Because the story of how it came about is told in the book of Maccabbees, which is not part of the Jewish scripture, Hanukkah is actually considered a minor holiday in comparison to Rosh Hashanah (New Year), Yom Kippur (the Day of Atonement), or Passover (Easter).

Nonetheless, its message as a time of gratitude for freedom from oppression has played an important role in the lives of many Jewish families around the world for generations.

"I think my children's first joyful experience of Judaism was lighting Hanukkah candles and getting eight days of presents," wrote Dr. Misha Galperin, the executive vice president and CEO of the Jewish Federation of Greater Washington, who was born in Ukraine, and moved to the United States in 1976. "Their genuine joy over something Jewish became my joy."

The origins of Hanukkah are rooted in the time of Alexander the Great, who, as ruler over much of what is now the Middle East, allowed the inhabitants of the region, including Jews, to observe their beliefs freely.

But about a century later, Antioch IV became ruler and tried to force the Jews to assimilate through killings, desecration, and by replacing the high priest in the Temple of Jerusalem with a Hellenist.

Two groups of rebels joined forces to oppose Antioch and reclaim the Temple, the most significant of which was led by Mattathias the Hasmonean and his son, Judah Maccabee.

In the end, the revolution was successful, and the Temple was reclaimed.

But more than the victory over oppression, Hanukkah commemorates a miracle that took place while the Temple was being rededicated.

Oil was needed to light a menorah that was supposed to burn throughout every night, but only a small amount - approximately one night's worth - that had not been defiled was available. The menorah was lit using that small amount of oil and miraculously burned for eight whole days, giving enough time for more to be prepared.

For this reason, every synagogue in the world takes a moment of Hanukkah to recite this passage from the Book of Zechariah: "Not by might and not by power but by my spirit says the Lord."

A menorah holds nine candles: one for each night of Hanukkah, with a centerpiece, a shammus (guard, or servant). The candles are lit from the far right to left, just as the Hebrew alphabet is read. When the shammus candle is lit, three berakhot (blessings) are recited: l'hadlik neir, a general prayer; she-asah nisim, thanks to God; and she-hekhianu, a prayer thanking God for once again allowing you to celebrate this time of year.

The first candle is then lit using the shammus candle, which is then placed back into its holder. The candles must stay lit for a minimum of half an hour.

Because many Jews are prohibited from lighting a fire on Shabbat (the sabbath, or day of rest), Hanukkah candles are lit before the Shabbat candles on Friday night and after Havdalah (the conclusion of the Sabbath) on Saturday night. The following blessing is said each night:

Baruch atah adonai eloheinu melech ha'olam asher kid'shanu b'mitzvotav v'tzivanu l'hadlik neir shel Chanukah. (Blessed are You, our God, Creator of time and space, who enriches our lives with holiness and commanded us to kindle the Hanukkah lights.)

Food is also an extremely important part of Hanukkah.

Because oil is such a symbolic part of the holiday, many Hanukkah foods are fried. Among Ashkenazi Jews (those from Central and Eastern Europe), this usually includes latkes. Sephardic Jews (those originating from the Iberian peninsula) often cook sufganiyot (jelly doughnuts).

The act of giving gifts was not originally a part of Hanukkah, but is often incorporated into the tradition. The only traditional Hanukkah gift is gelt, small amounts of money, which are used with a dreidel, a gambling game played with a square top.

Music is also central to the festival. The most common Hanukkah song is Maoz Tzur, a five-verse tale that gives thanks for deliverance from oppressors; tells the story of the exodus from Egypt and the liberation from Babylonia, Persia, and Syria; and recounts the story of Hanukkah.

Maoz Tzur is popularly known among Christians as Rock of Ages, but the English translation takes substantial liberties. Here is a literal translation of the first verse:

O mighty stronghold of my salvation,

to praise You is a delight.

Restore my House of Prayer and

there we will bring a thanksgiving offering. When You will have prepared the slaughter for the blaspheming foe,

Then I shall complete with a song of hymn the dedication of the Altar.