Our invisible friends and neighbours

FAMILY REUNION, a photo exhibit i about gay and lesbian parents in Central Europe now showing at the Open Society Foundation in Bratislava, might as well be invisible. 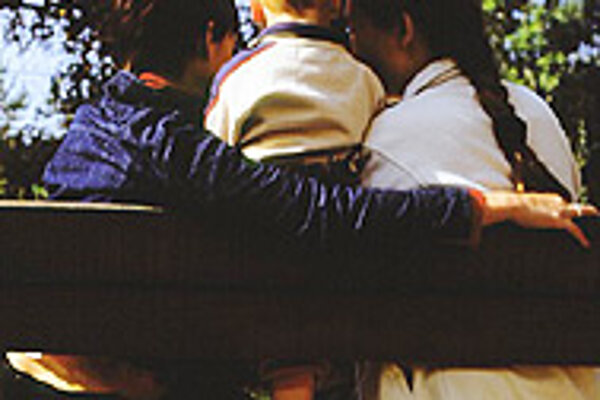 Font size:A-|A+0
FAMILY REUNION, a photo exhibit i about gay and lesbian parents in Central Europe now showing at the Open Society Foundation in Bratislava, might as well be invisible.

At least that's the reaction it seems to be getting from the public since opening about a week ago. During my visit, the curator arrived ten minutes late, and looked surprised to see anyone waiting. And when I told her a friend's recommendation had prompted me to write this article, she nearly stopped dead in her tracks.

Is ineffective advertising to blame? Or is the subject matter too sensitive for a region still struggling to adjust to a world in which minorities are demanding to be both seen and heard?

Whatever the reason, the fact the exhibit is relegated to the tiny basement of the lone occupied building on an unfrequented side street certainly doesn't help.

But putting all that aside, the photographs are colourful, compelling portraits of love, deep sacrifice and personal fulfillment. Taken by five photographers - one from each of the Visegrad Four countries, plus Slovenia - each answers the organizers' original question of "What is life like for gay and lesbian parents in Central Europe?" with images of happy children living everyday lives surrounded by beaming parents.

Well, beaming, that is, when you can see their faces. In almost all the photos, the focus is squarely on the child, and the parents are portrayed from the back, out of focus, or from the waist down.

"While, for instance, in the United States, portraits of gay and lesbian parents can be seen in popular magazines, in our region queer parents remain invisible," STUD Brno, one of the organizers of the event, stated. "Names had to be changed to protect the anonymity of the parents who took part in the project. Not even the names of those who interviewed them were stated in full."

This is apparently a daily reality for couples like Olga and Jolanta, the parents from Krakow, Poland pictured in the exhibit with their young son Krzystof. The couple calls their city "neither very friendly nor tolerant", and steeped in a tradition that "teaches homophobia."

"When Krzystof started school," Olga recalled, "the teacher all of a sudden tried to convince him that having two moms wasn't normal."

Photographer Zdeněk Ulrich's careful portraits show a close-knit family, and include a touch of humor.

"Many gay families feel invisible because they live without the right to adoption and without domestic partnership laws," said Paula Jojart, an expert on gay rights who works for Altera, a Slovak association that aided in organizing the exhibit.

This was the case for Bojan and Ulrich, a middle-aged couple who lives in Ljubliana with Bojan's 13-year-old son Matej. Photographer Radana Dungelová's pictures portray a thoughtful Matej surrounded by affectionate fathers.

But with laws the way they are in Slovenia, Bojan and Ulrich have a relationship equivalent to permanent roommates.

"Neither Bojan nor I work standard hours, so there is always someone home for Matej," said Ulrich, who's half Austrian. "That's the advantage. The only handicap is the legal inequality. If we were a heterosexual couple, I would marry Bojan and tomorrow we could live in Graz or Vienna."

Zsuzsana and Beata of Budapest, who are raising 10-year-old Ildiko, share many of the same concerns. As Ildiko's biological mother, Beata would have exercised her right to add Zsuzsana onto the birth certificate as a second parent, just in case.

"The way it is, it's strange," Zsuzsana said. "Legally, I'm taking care of a child I have no official relationship with."

For more information, visit www.family-reunion.net or call the Open Society Foundation at 02/5442-4730.