Welcome (back) to the European club!

AS BUCHAREST and Sophia prepared for a mass celebration of the entry of Bulgaria and Romania to the European Union on January 1, The Slovak Spectator visited Bulgarian Ambassador Ognian Garkov and Romanian Ambassador Valerica Epure to get their thoughts on one of the most significant moments in the modern histories of their countries. 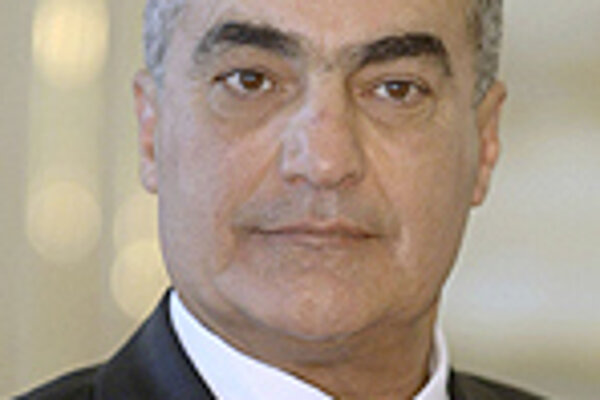 AS BUCHAREST and Sophia prepared for a mass celebration of the entry of Bulgaria and Romania to the European Union on January 1, The Slovak Spectator visited Bulgarian Ambassador Ognian Garkov and Romanian Ambassador Valerica Epure to get their thoughts on one of the most significant moments in the modern histories of their countries.

The Slovak Spectator (TSS): Slovakia joined the EU in 2004, less than three years before your countries, but at an altogether different time in terms of enthusiasm in Europe for another round of enlargement. How would you compare the experiences of the "Vilnius 10" in May 2004 with your countries' experience of enlargement?

Ognian Garkov (OG):Joining the EU in 2004 was one thing, while doing it three years later was something else. One important difference is that back then 10 countries joined, increasing the size of the EU by 40 percent from 15 to 25. In 2007, while we have had more time to learn from the experience of the recent newcomers, we also faced the same European Commission and the same criteria, as well as the same people monitoring the preparedness of the countries. It's one thing for these people to monitor 10 countries, and another thing to monitor 2. They had more time to look at the details. I think in that way it was harder for Bulgaria.

Valerica Epure (VE):On the one hand it's not that dissimilar, because we all had to fulfill the Copenhagen criteria. But of course there are also differences. Romania is now the seventh largest EU country in terms of population. It has a very large agricultural sector, and it has the second largest external EU border after Finland's with Russia, so you can imagine these had an impact during the negotiation process.

When I compare it to the enlargement process in 2004, we were judged according to the same criteria, and as with the NATO enlargement, it was a good experience for the first wave, to see how it works for both sides. While our two countries belong to the same wave as May 2004, the "10+2" fifth round of enlargement, along the way certain adjustments were made, because it became clear that it was not enough just to assume the acquis communautaire and bring in the legislation and the legal framework. You needed to have the administrative capacity to put it all into practice, and this came later.

I remember that when the process of enlargement started, there was a discussion as to what to do first - whether to reunite Europe, which was very important for those countries starting a very painful transition, or to focus on the integration of the EU itself, meaning institutional reform. Some said we should first reform and then ask other countries to join, while others said no, it's better to admit the countries first and have them be a part of the reform process. But the two processes could not occur in parallel, so now, after the fifth wave of enlargement, it is time for institutional reform.

TSS: Much has been written about there being a different feeling in the EU towards your two countries joining compared to 2004. Do people in Romania and Bulgaria feel welcome in the EU in 2007?

VE: Let me tell you, this is a time of celebration in our two countries. In Romania it is a very emotional moment. As for the feelings of others, and our feelings about their feelings, it is above all a matter of communication. This is a win-win situation, and this needs to be clearly explained to the public.

We know it is a difficult process, and we don't expect everyone to be jumping up and down at that prospect. We also know the benefits of enlargement will not come overnight, and that it is a very difficult journey that we are engaged on. But I am confident that Romania will be a very, very nice surprise. We have a big market, and we have a very resourceful people with imagination and creativity. Mark my words, you will see.

OG: I think there was a feeling [of resistance in the EU to further enlargement], yes. But Bulgarians are very self-critical, and we tried to meet all the conditions, so I think this criticism [within the EU] was very helpful for Bulgaria to mobilize people and the political elite of the country.

TSS: What areas were your countries well prepared in, and where do you still have work to do?

OG: Like many former communist countries, we have been criticized for some problems in agriculture, in the judiciary, and in the struggle against corruption. But again, this criticism was very useful for the Bulgarian political establishment.

VE: During our evaluation reports from the EC, we found that in some areas we were even better prepared than the 10 newest members, but in other areas the fact that we had a tougher regime before 1989, and that our starting point was thus different, meant that we had a lot of catching up to do.

TSS: Did Bulgaria and Romania receive much help from Slovakia in preparing for EU membership?

VE: Yes, indeed. We drew from the experience of all 10 new members. In the judicial system, for instance, we had counselors from many countries in the Justice Ministry. In many sectors, however, we found that the experience of the 10 newest members was more relevant for us, because we all came from the same background. We built a web of contacts at all levels of each ministry to help us avoid making mistakes and wasting time.

OG: The Slovak experience was very useful, maybe not so concretely, but we are very thankful that the Slovak parliament was the first one to ratify the treaty on the entry of Bulgaria and Romania to the EU. The Slovak government was also the second in the EU after Finland to open its labour market to Bulgarians. Our Slovak partners and friends shared some useful experiences and advice with building administrative capacity and preparing to use European Union funds.

TSS: Firms in Slovakia, especially in the auto and construction sectors, have called on the government to loosen migration policy to bring skilled foreign workers to fill gaps on the local labour market. Do you think Romania and Bulgaria will be supplying workers to Slovakia?

OG: At the moment we have our own problems finding skilled labour. There are people who want to work abroad - our government estimates the number at 40,000 - but that is not a great figure. I think that most Bulgarians who want to work abroad are already doing so - some of them in Canada, others in Germany, Italy, Spain, Holland and Greece.

VE: We were happy that Slovakia decided to open its labour market without restrictions for Romanians and Bulgarians. But the truth is that we also face a shortage of labour, and I think this will be even more acute in the years to come. Since the decision to open the labour market here was taken, we have received many requests to ask people in Romania if they would like to come and work in Slovakia, but we could find hardly anyone interested. I find that even when I go out to a restaurant, if people know I am the ambassador from Romania they will come and ask if people from my country are interested in working here.

However, those Romanians interested in working abroad have already left, for example to Italy, France and Spain, where it has very much to do with the language. What we need to do is to encourage them to come back, because Romanians do not tend to emigrate for good. Like other countries, Romania also faces a graying of its population and shortages on its labour market.

TSS: Who are your natural allies in the EU?

VE: Romania is the second largest country after Poland in the fifth enlargement wave. It is a Latin country, and it belongs geographically to the south. On the other hand, we are a member of the Central European Initiative, and we frequently attend Visegrad events, while the fact that we have an external border of over 2,000 kilometers gives us something in common with Finland, for example, which has a huge external border with Russia. So it is not easy to narrow it down, and I think the best and tightest community in the EU is that of like minds.

OG: In terms of language and culture the Slavonic countries - Poland, the Czech Republic, Slovakia, Slovenia. We also have good relations with many of the original members, and the largest number of Bulgarian students abroad are in Germany. I think Bulgaria will be a good player in the European group. We are also a member of the Black Sea Initiative, and we work with the Visegrad Group, as we have a similar history and experience.

TSS: What is your position on the eventual EU membership of Turkey?

OG: Our position on any future member is that they have to meet the conditions. But I think we have a more positive attitude towards Turkey because they are our neighbours, and the Turkish minority makes up 10 percent of the Bulgarian population. They must have European prospects, but above all they need time. There is complete consensus in Bulgaria to support Turkish Euro-integration.

For Bulgaria and Europe it would be better for more countries to have prospects of EU membership, such as Macedonia, Serbia, and Albania. And why not Ukraine? Ukraine is a typical European country. But it depends on the capacity of the European Union, and whether or not the countries are prepared.

VE: We are in favour of continued enlargement. It is a powerful tool, as it proved in our case and for others, and we believe it will also be so for the countries of the Western Balkans and for Turkey. So enlargement should go on, but it should be balanced by the ability of these countries to meet the criteria.

At left, people dance the traditional Romanian "hora" dance as they hold EU flags at a New Year's celebration party on Piata Universitatii Square in Bucharest, the biggest such event since the fall of communism in 1989.