Economic success story to be repeated in 2007

ANALYSTS view 2006 as an extraordinarily successful year for the Slovak economy, characterised by rapid GDP growth, a significant fall in unemployment, and the Slovak crown's breaking records against both the euro and the US dollar.
news wire. 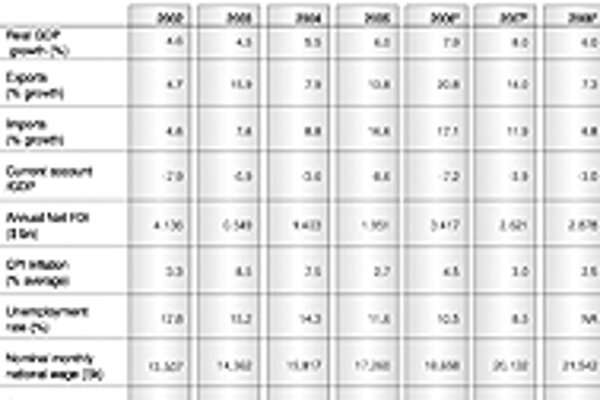 Font size:A-|A+0
ANALYSTS view 2006 as an extraordinarily successful year for the Slovak economy, characterised by rapid GDP growth, a significant fall in unemployment, and the Slovak crown's breaking records against both the euro and the US dollar.

According to economists, next year could be even better.

"In 2007, the economy could grow even more rapidly - we expect by 8.2 percent - thanks to increasing production and export levels in the auto industry," Slovenská Sporiteľňa analyst Michal Mušák told the TASR news wire.

Mušák said he believed that economic growth in the final quarter of 2006 could reach almost 8 percent after setting a record of 9.8 percent in the third quarter.

"The economy is being boosted by investments, supported by a favourable entrepreneurial environment and the availability of bank loans," said ČSOB analyst Marek Gábriš.

Viliam Pätoprstý from UniBanka said that on top of important investments in the auto sector, mechanical engineering, and the electro-technical industry, he expects the service sector to develop as well next year.

Slovakia's record economic growth is also helping the labour market. In comparison to 2005, unemployment has fallen, thanks partly to the growing number of Slovaks working abroad (180,000, according to a Foreign Ministry estimate). New jobs created in Slovakia, however, have played an even more important role, said Mušák, who expects unemployment to fall to 12.7 percent in 2007.

Meanwhile, the unemployment rate calculated from the number of people registered with labour offices and able to take work immediately, fell to 9.12 percent in November, the lowest level since the Labour Bureau began keeping the statistic in 1996.

"Real wages should rise as a result of an increase in nominal wages and lower inflation," Gábriš added.

"The average inflation rate in 2006 should come in at about 4.5 percent, but should fall to 2.5 percent in 2007," added Mušák, who believes Slovakia has a good chance of meeting the economic criteria for adoption of the euro on schedule on January 1, 2009.

In relation to the euro adoption, 2007 and 2008 will be years of scrutiny for Slovakia, as European auditors look to make sure the state debt, budget deficit, interest rates and inflation rate are at or below the ceilings imposed.

But with the crown at record strength, domestic energy prices capped, and world oil prices down from their height in 2006, inflationary pressures in the Slovak economy are easing, even at the high rate of GDP growth. "The central bank (NBS) could start considering lowering key interest rates as of the second half of 2007," Gábriš said.

The foreign trade deficit is also expected to fall dramatically in 2007. "New export capacities, for example at auto manufacturers Kia and PSA Peugeot, and at car component manufacturer Getrag Ford, will result in an improved trade balance. Other investments are also expected," noted Gábriš, who estimates that the trade deficit will fall to 1-1.5 percent of GDP in 2007 from around 6 percent in 2006.

According to Pätoprstý, the key political/economic decision of 2006 was the new Robert Fico government's support for euro adoption on schedule in 2009. "This decision was crucial in terms of maintaining economic stability," he said. "It not only forced the new government to lower the budget deficit, but it also brought excellent rating assessments and stabilised the crown, enabling the NBS to keep key interest rates at a low level."