EVEN THOUGH no Slovak feature films made it to cinemas in 2006, the Slovak Film and Television Academy gave out the first Slnko v sieti (Sun in a Net) national film awards on December 8 as part of the eighth annual International Film Festival Bratislava. Personalities from the Slovak cultural and social scene attended the ceremony, which was subtitled Under Construction as a way of emphasizing how lackluster Slovak filmmaking has become. 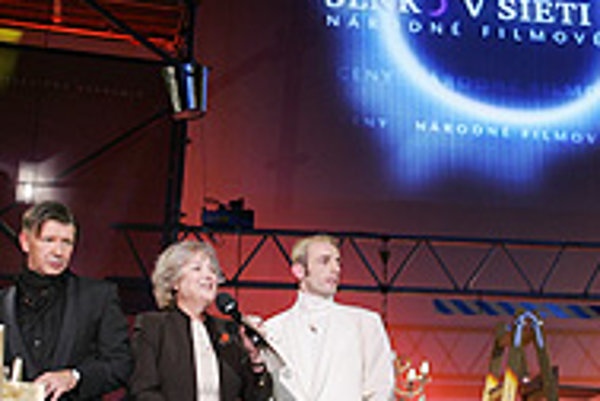 Font size:A-|A+0
EVEN THOUGH no Slovak feature films made it to cinemas in 2006, the Slovak Film and Television Academy gave out the first Slnko v sieti (Sun in a Net) national film awards on December 8 as part of the eighth annual International Film Festival Bratislava. Personalities from the Slovak cultural and social scene attended the ceremony, which was subtitled Under Construction as a way of emphasizing how lackluster Slovak filmmaking has become.

The academy awarded prizes in 14 categories to films made in 2004 and 2005. Four films competed in the main category, of which two were Czech movies of Slovak co-production - Šílení (Lunacy) by Jan Švankmajer and Příběhy obyčejného šílenství (Wrong Side Up) by Petr Zelenka. Three films competed in the documentary category and three in the animated films category.

Documentary filmmaker and traveller Pavol Barabáš received a prize for Amazonia Vertical, a documentary about Becko Ondrejovič's fascination with Auyan Tepui, the highest table-top mountain in the Amazon. The prize for Best Animated Film went to Ivana Zajacová and Jozef Mitaľ for Nazdravíčko! (Cheers!). Kukushka by Alexander Rogožkin won Best Foreign Film. An honorary award was given to cinematographer Stanislav Szomolányi and film critic Pavel Branko.

The Slnko v sieti Awards borrowed its name from a famous film from 1962. "Slnko v sieti is the first film of the Czech-Slovak new wave, which is still highly regarded to this day. As well as a famous film by writer Alfonz Bednár and director Štefan Uher, it is simultaneously a beautiful, modern metaphor," the president of the Slovak Film and Television Academy Zuzana Gindl-Tatarova told the Pravda daily.

The Slnko v sieti Awards, which will be given out every second year, is the Slovak version of the film awards given out in individual European and world film industries, such as the Czech Lions, Spanish Goyas and American Oscar Awards.

Filmmakers consider the awards very important and supportive to the creation of new films.

"Of course, these awards are very important," producer and editor Patrik Pašš told the Pravda daily. "They increase the motivation of the filmmaking society, and send a message to all spheres of society that we are here, we are alive and want to create and fulfil our social mission."

During the festival, filmmakers debated how many and what Slovak films will make it to the silver screen in 2007 and 2008. Even though Zima Kúzelníkov (The Magicians' Winter) by Dušan Trančík was the only film completed in 2006, and that was made for Slovak Television, rich prospects remain. During the seminar, filmmakers unveiled plans to complete almost 40 movies over the next two years, of which two thirds are feature films.

Arguably the most widely anticipated and high budget film is the €10 million Bátoryčka (Bathory) by Juraj Jakubisko. The story about the bloody countess should be ready in an English version in January 2007.

Other feature films include Návrat bocianov (Return of the Storks) by Martin Repka. Within the documentaries, film lovers can look forward to Ako sa varili dejiny (Cooking History), a project about army cooks, by Peter Keselecs. Marko Škop, the director of Iné svety (Other worlds), a documentary about the Šariš region, will serve as producer of the documentary Hľadanie (Searching), made in co-production with the Czech Television station.