Martin and the Sun sets without rising

CHRISTMAS is the perfect time to take your child to the theatre. Already busting with anticipation, they're in just the right mood to be enchanted by timeless traditions, such as The Nutcracker, that engage their imagination with vibrant scenery and a magnificent narrative score. 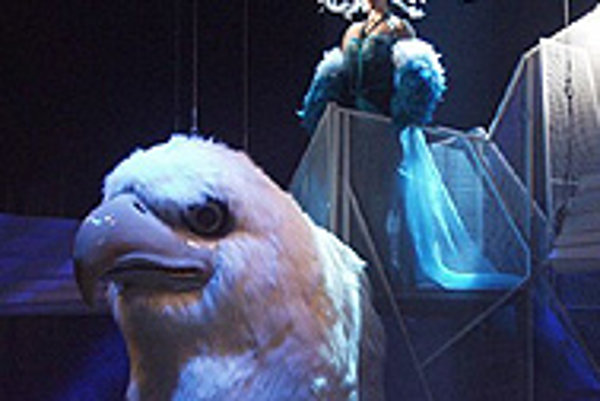 CHRISTMAS is the perfect time to take your child to the theatre. Already busting with anticipation, they're in just the right mood to be enchanted by timeless traditions, such as The Nutcracker, that engage their imagination with vibrant scenery and a magnificent narrative score.

The Slovak National Theatre (SND) attempted to create this kind of tradition with its new production of the children's opera Martin a Slnko (Martin and the Sun) by Slovak composer Tibor Frešo, which premiered the weekend of December 19. But instead of bringing the story to life with excited tenderness and a memorable cast of characters, the whole conception came across as overintellectualized and distant, as though the question of what truly entertains children was never fully thought through.

Now, if this happened at a performance of a tested classic, such as Humperdinck's Hansel and Gretel, I would assume it was the result of a faulty production. But Martin a Slnko was composed just thirty years ago, as can be heard in its harmonies and melodies, and has been staged only four times, including its original premiere. Therefore, the libretto and score have yet to earn the privilege of an unconditional benefit of the doubt.

Nevertheless, the libretto seems fundamentally sound. Martin, a young man of Slovak folk origin, embarks on a journey to take the Warm Sun - the giver of life to all of civilization - back from the Cold Sun, who has stolen it. The Cold Sun is cunning, and tries to tempt Martin with unimaginable rewards, but Martin needs only to consider the fate of his beloved mother and sweetheart to realize the greatest reward is their happiness. Other characters fulfill their typical fairy tale roles as well, such as the evil magician Pandúr, the beautiful Ice Princess and the lovable Mrmloš the Bear.

So, like any great children's story, it blends stunning visuals with genuine emotional drama. Heroism, temptation and love are themes children understand and can identify with. And the Cold Sun is the ideal villain, simultaneously terrifying and fascinating.

With all this to work with, one feels compelled to ask three questions after seeing the opera: why did designer Ľudmila Várossová dress everyone in costumes straight out of Bjork's closet?; why, in the second scene of act one, did the forest animals, who could've been so lively and adorable, completely confuse the audience by introducing contemporary references, such as giant Euro coins and curling?; and why was a projection screen affixed atop the stage to play images of violent weather and war throughout?

"Children are a discerning audience, and they pay attention to detail," the opera's director, Pavol Smolík, explained to the Sme daily. "The video projection was meant to show them that opera can be modern."

Whether inserting giant Euro coins and video projection into an opera in which most of the characters are dressed in nineteenth century Slovak folk outfits makes it "modern" is one thing to discuss, but is the lack of something modern really what stops children from enjoying the arts? Millions have grown up loving The Nutcracker, which, to my knowledge, has never experienced a production that incorporates modern references. I'm sure the same can be said for the opera Hansel and Gretel.

In fact, Amahl and the Night Visitors by Gian Carlo Menotti, a Christmas opera about a spirited crippled boy who meets the Three Kings during their journey to see the baby Jesus, is cherished by children all over the world, though it takes place during biblical times and has never, to my knowledge, been staged with modern references. Anyone familiar with Amahl knows its magic would be instantly dispelled if the Three Kings, while dressed in robes and riding on camels, revealed that, instead of gold, frankincense and myrrh, they were carrying a credit card, a Playstation and an iPod.

Part of the reason Amahl communicates with children has to do with the fact the main character is a ten-year-old boy, but the story is also compelling, the characters are human and the music transports you right into their world.

Unfortunately, Martin a Slnko's score felt distant. Children are emotional beings that respond to direct communication. The beauty of the great works I've listed above is their command of simple elegance that has a purely emotional appeal to children, then unfurls its complexity when you rediscover it as an adult.

Frešo's music had only one layer: sometimes pleasant, most of the time unmelodic. Not much of it engaged me and, most troublingly, none of it touched me emotionally. From the timid applause the audience delivered, I can safely say it experienced the same.

The singers deserve a lot of credit for doing to their best to interact with the young audience. Pavol Remenár was in good voice as Martin, and was convincingly pained by the memories of his mother and sweetheart, Milica, as he struggled with the Cold Sun's temptations. Jitka Sapara-Fischerová was richly resonant as the Mother.

The finest acting of the evening came from Ladislav Neshyba, whose Mrmloš the Bear was a delight. Mr. Neshyba's dark growl was a perfect contrast to the cold forest in which his scene took place, and his physical comedy was entertaining and genuinely impressive. Marián Pavlovič as Kubo, a local townsman, was also amusing and charming.

Making opera more comprehensible and giving it broader appeal, especially to the young, is an honorable goal that requires artistic honesty. And instead of using images and ideas from the modern world, perhaps we should follow examples like Leonard Bernstein's Young People's Concerts (which Larry Newland, formerly one of Bernstein's assistant conductors, revived at the Slovak Philharmonic last year, to great acclaim): when we capture children's imaginations, we capture their hearts.