BRATISLAVA confirmed its reputation as "Partyslava" on New Year's Eve, welcoming around 100,000 Slovaks and foreigners to the centre of town for a live music and sound-pyrotechnic show organized by the Bratislava mayor's office and civic association Hlava 98. Slovak was the dominant language heard that night, but Slovenian, Italian, French and Spanish could be heard as well. 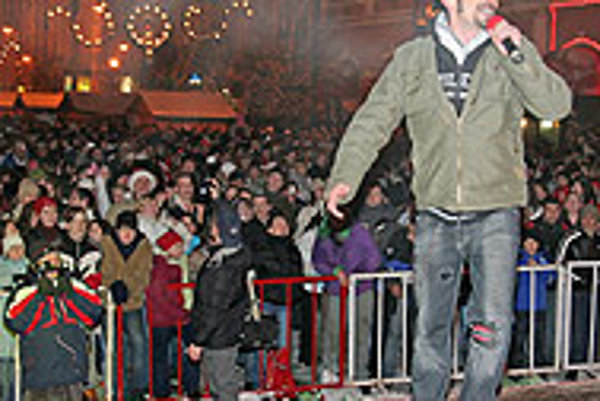 Font size:A-|A+
BRATISLAVA confirmed its reputation as "Partyslava" on New Year's Eve, welcoming around 100,000 Slovaks and foreigners to the centre of town for a live music and sound-pyrotechnic show organized by the Bratislava mayor's office and civic association Hlava 98. Slovak was the dominant language heard that night, but Slovenian, Italian, French and Spanish could be heard as well.

The Main Square was once again the place to be for live music, with Slovak bands Ska-Pra Šupina, Hex, Vidiek and Gladiator performing. Ska band Polemic was the last, finishing an hour after midnight.

The Pressburger Klezmer Band had already started people dancing on Hviezdoslavovo Square by 18:00, and was followed by both the Roma folk band Sendreiovci and Mango Molas, which mixes Afro-Cuban rhythms, samba and bossanova with current music styles.

Afterwards, the nearby skating rink was turned into a dancefloor.

As in previous years, people moved just before midnight from the centre to the river to see a laser countdown and 30-minute foreworks show. Legendary Slovak keyboardist Marián Varga accompanied the display on keyboards and welcomed 2007 with his evocative music.

Unfortunately, dense fog covered the sky, blocking much of the display from view. Colourful fans of fireworks sprayed from just above the ground were the most visible patterns, and about 30,000 spectators were left only to imagine the beauty of the final patterns.

The hundreds of staff members, police, private security services, paramedic services and firefighters on hand described the celebrations as quiet, calm and flawless.

In fact, police official Miroslav Chlebovec told the SITA news wire that the celebration was the safest of the last few years. Emergency services were mostly preoccupied with caring for drunk revelers and minor injuries due to improper fireworks use.

Police banned anyone carrying fireworks, glass bottles or metal and wooden sticks from entering the centre.

While New Year celebrations have gained popularity in Bratislava, events outside the capital have been losing attractiveness, with howling drunkards and unruly fireworks use being the main reasons.

Budgets influenced the celebrations as well. Bratislava reportedly spent millions on its festivities, but smaller towns could afford to spend just hundreds of thousands.

Žilina welcomed the new year with fireworks on just Hlinkovo Square and at the Vlčince, Solinky and Hájik housing developments. The town has not organized an official celebration since 1999, when festivities were cancelled due to trouble with vandals and public drunkenness.

Trnava has followed a similar path. Pavol Tomašovič from the mayor's office cited problems with fireworks, vandals and intoxicated people, as well as double fees charged by bands as the main reasons the town has stopped organizing celebrations in the city centre.

In Košice, Jordanian singer Lobo heated up an audience of 3,000 who came to the main street to welcome the new year.

Revelers dined at refreshment stands, which were open for the first time, before and during a grandiose fireworks display that lasted for about ten minutes.

Trenčín prepared for mostly young celebrants with a disco on Mierové Square. Many other people arrived in downtown shortly before midnight to enjoy the fireworks display, only to have it covered by a dense fog.

Tragedy did not rest

Though new year celebrations were generally calm, the evening did end in tragedy for one 15-year old young man, who was stabbed during a fight shortly before midnight in the village of Moravský Svätý Ján. He was killed instantly. The police have already made an arrest and charged a 16-year old man with manslaughter.

If found guilty, he could face between seven and ten years in prison, Martina Kredatusová of the Regional Directorate of the Police Corps' Presidium in Trnava told the TASR news wire.

Also, a 23-year man in Senica was seriously injured when a firework hit him in his temple. He underwent surgery at Kramáre hospital in Bratislava.

And it took firefighters almost 24 hours to extinguish a fire in Slovenský Raj (Slovak Paradise) mountains, probably started by irresponsible visitors. On January 1, local foresters took over control over the spot. The fire hit an area of 0.28 hectares. Damage has been estimated at Sk40,000.