VLADIMÍR Palko, the former deputy chairman of the opposition Christian Democratic Movement (KDH), has officially announced that he will run for the party's top post at its upcoming spring national congress. 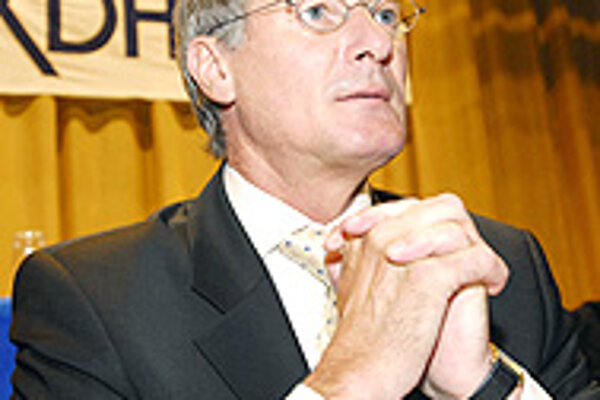 Font size:A-|A+
VLADIMÍR Palko, the former deputy chairman of the opposition Christian Democratic Movement (KDH), has officially announced that he will run for the party's top post at its upcoming spring national congress.

The KDH is a minor player in parliament, with only 14 MPs in the 150-seat house on the strength of slightly over eight percent in June 2006 elections. However, the party is seen as holding the key to the stability of the Slovak government, as current KDH chairman, Pavol Hrušovský, is more receptive to the notion of joining the ruling coalition.

Hrušovský is regarded as a more pragmatic politician and less dogmatic in his conservatism than Palko. After the general elections last year, for example, Hrušovský advocated joining a coalition with Smer, the leftist/populist election winner, while Palko led an internal party revolt against the idea.

Given the conflicts that have been generated in the government by the HZDS junior coalition party, some members of government have speculated that the KDH could replace the HZDS, although the three party bosses announced on January 8 that they had ruled out this possibility.

However, Palko said that his focus was on the KDH rather than its political relationships, and that he wanted to return the party to its former "greatness".

"If we don't see ourselves in this way and we only wait to see if we will be taken in or rejected by somebody [i.e. the government] as an alternative, we can never be a confident party. My main drive in running for the post of chairman is the thought that the KDH is able to achieve great things," Palko said on January 9 in announcing his candidacy.

According to Palko, the KDH should be a nationalist and conservative party that is vigilant in promoting Slovakia's interests in the EU. The party must also expand its scope beyond its traditional cultural and ethical agenda and address such areas as law and order, justice, and domestic affairs, the former interior minister said.

"We also have to build a reputation as a party that is competent on economic issues," Palko said.

He added that he believed the KDH would remain united after the upcoming leadership ballot, which is expected to be held in May.

"All internal disputes within the KDH are over for me now. I'm looking ahead and I'm offering cooperation and reconciliation to everyone," he said.

Palko suggested that if he won the vote, Hrušovský should become the party's first vice-chairman.

A well-known Slovak politician who served as interior minister in the previous right-wing government, Palko lacks popularity within his own party.

According to Štefan Hríb, editor of the conservative Týždeň weekly, Palko, along with other KDH politicians such as former Justice Minister Daniel Lipšic and MP František Mikloško, has shaped Slovakia's public discourse for a long time.

"Not everyone agrees with them but everyone knows they're there. At the same time this is their biggest weakness - they realize and use their dominance within the KDH, and yet by doing this they also give the impression of arrogance and superiority," Hríb wrote.

Palko confessed to coming across as arrogant. He said he believed that the KDH needed a change, but that this change "should be a calm one".

"KDH members basically acknowledge my qualities, but some wonder whether I know how to listen to others, and they see it as an expression of my arrogance ... I discussed this with my colleagues and told them I wasn't arrogant, and that the problem wasn't in me but in others. One of them said to me: 'We're fond of you, you're an honourable and just man who knows how to make sacrifices, but you're arrogant.' And I discovered that yes, I was arrogant. And I'm sorry."

According to Čarnogurský, the KDH has to adjust to the new social situation in Slovakia. "The KDH needs a new dynamic, and although it grieves me to say it, taking on a new dynamic sometimes also requires painful personnel decisions," Čarnogurský told the Sme daily, adding that he thought Palko was more capable of bringing this new direction to the party than Hrušovský.

Hrušovský has yet to confirm he will run again for the post of chairman. KDH spokesman Martin Krajčovič told The Slovak Spectator that Hrušovský would not comment on the issue.

"We consider the election of the KDH chairman to be strictly a party matter and will not comment on it in the media," he said.

According to Grigorij Mesežnikov, the head of the Institute for Public Affairs think-tank, it remains to be seen whether Palko can convince other party members that he is the right man for the job.

The analyst believes that regardless of whether Palko or Hrušovský is elected, no major changes within the KDH should be expected.

"The two probably differ in the way they view possible coalition partners. While Hrušovský is part of the group that would consider forming a coalition with Smer, Palko is against such a coalition. However, in terms of the major cultural and ethical issues that are at the core of the KDH's true agenda, the two are very similar," Mesežnikov said.

He also noted that despite the fact that Palko was running against Hrušovský for the post of KDH chairman, the KDH is still a unified and consolidated party. "There are no factions fighting each other and no core changes will take place in the party regardless of who is elected as the new chairman".