VLADIMÍR Mečiar's New Year's gift of a pig to his coalition partner, Prime Minister Robert Fico, may have been a harmless bit of tomfoolery, were it not for the fact that his choice of animal was eerily appropriate to his government's political style. 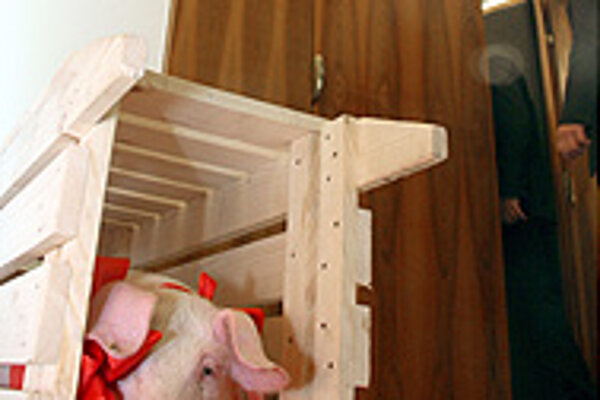 Font size:A-|A+
VLADIMÍR Mečiar's New Year's gift of a pig to his coalition partner, Prime Minister Robert Fico, may have been a harmless bit of tomfoolery, were it not for the fact that his choice of animal was eerily appropriate to his government's political style.

This is not to call either man a swine, but more to attribute porcine qualities to their use of patronage since forming a government in summer last year.

This paper has reported in the past on unwise appointments to posts at state institutions, such as that of Peter Hrkotáč, a former business associate of murdered Bratislava mob figures Robert Deák and Peter Steinhübel, to the Bratislava chapter of the Land Fund (this was Mečiar's HZDS party). Hrkotáč was dumped after a tenure of only three weeks, but the point was made: These jobs are ours to distribute as we see fit, with no regard for political forbearance or even common sense.

The pork-barrelling continued with jobs for the boys at the Transpetrol oil pipeline administrator and the SPP gas firm, with the difference that the lucky appointees worked for companies believed to have sponsored the parties of the current government.

At the same time, the government gave us uplifting love stories, such as the fact that HZDS spokesperson Magdaléna Fajtová and her boyfriend found employment together at the Agriculture Ministry, controlled by a HZDS nominee, or that Marcela Fabianová, a buddy of Interior Minister Robert Kaliňák, secured one of the top jobs at the Defense Ministry as head of the minister's office, while her boyfriend, Marián Saloň, was taken under Kaliňák's wing as head of his office.

Nor has the government forgotten about its nearest and dearest. Vladimír Harabin, son of Justice Minister Štefan Harabin, is to be head of the Land Fund office in Kežmarok, while HZDS chief Mečiar's niece, Karin Mečiarová, has applied to be the boss of the Legal Aid Centre under Harabin's Justice Ministry.

Gee, do you think she'll get the job?

But before we get carried away, we should note that gross nepotism has always been a blemish on Slovak politics. The previous government appointed two men, Igor Grošaft and Juraj Minarovjech, to jobs at the FNM state privatization agency and the Slovenská Konsolidačná debt settlement agency, respectively, even though they had been business partners of Ľubomír Kudlička, regarded by police as the current head of the Takáč organized crime group in Bratislava. There was also the small problem of Miroslav Dzurinda, the brother of the former prime minister, and his cosy berth at the state railways company.

On a daily and personal level, politics is not about ideology or noble struggles. It's about the way in which power is used. For the average voter, this government may not be doing anything that hasn't been done before, but the baldness, boldness and ubiquity of its pork-barrelling takes one's breath away.

It almost makes you sorry for that New Year's pig, who could have had no idea what practices he was lending his good name to.