JÁN Sokol, the controversial archbishop of the Bratislava and Trnava diocese, has mounted a defense against persistent accusations that he collaborated with the ŠtB secret service during communism. 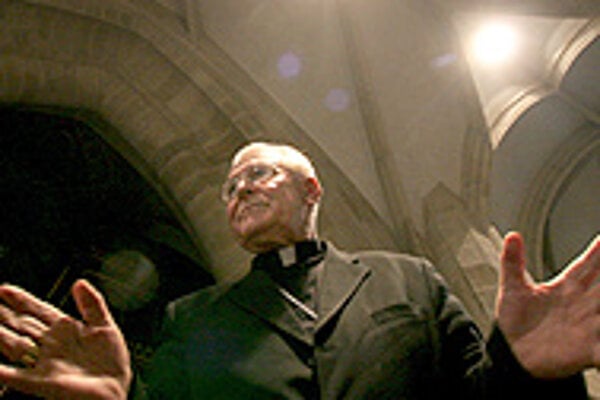 Font size:A-|A+
JÁN Sokol, the controversial archbishop of the Bratislava and Trnava diocese, has mounted a defense against persistent accusations that he collaborated with the ŠtB secret service during communism.

Although Sokol's alleged spy past has been a public secret for years, the allegations surfaced anew after Polish Archbishop Stanislaw Wielgus stepped down in early January when it was revealed that he had worked with the Polish communist secret service.

In Slovakia, however, direct proof of Sokol's collaboration has still not been produced.

Although files stored at the Nation's Memory Institute (ÚPN), which documents communist crimes in Slovakia, confirm that Sokol was registered as an ŠtB agent, details of the association are missing, as Sokol's personal ŠtB file was shredded in December 1989.

The ÚPN is in theory capable of reconstructing the shredded files of agents from documents filed by other agents, but has not done so in Sokol's case.

ÚPN spokesman Michal Dzurjanin told The Slovak Spectator that "the Institute's actions in this case have been in keeping with the law. There is nothing new that can be said on this topic."

According to the existing ÚPN documents, Sokol was made an ŠtB agent in 1989, the same year he was promoted from bishop to archbishop.

As a rule, in order to become an ŠtB agent, a candidate had to prove his willingness to work for the secret service, meaning that the agent status implied an active rather than a passive collaboration.

For that reason, under the post-1989 Lustration Law in Czechoslovakia that barred former top communists and ŠtB personnel from public office, agents were considered to have disqualified themselves from holding office, while people merely listed as ŠtB informers were not.

But Sokol, who is currently hospitalized, insists that he never worked as a communist spy.

"I want to state firmly and with a clear conscience that I never in any way cooperated with the ŠtB," the archbishop said in a pre-recorded statement that was played at a press conference called by the Church on January 11 in an attempt to clear Sokol of the allegations.

The Church remains firmly behind the archbishop. According to Cardinal Ján Chryzostom Korec, although Sokol was active in the state-sanctioned Church hierarchy during communism, he never had any doubts as to Sokol's loyalty to the Church.

Korec himself was persecuted by the communists and was a part of the "underground" Church, which operated out of official view.

ÚPN historian Miroslav Lehký said the regime infiltrated the Church in order to control and suppress the regime's enemies.

"The ŠtB tried to win priests and even higher Church dignitaries for cooperation," Lehký said.

Church historian Jozef Haľko claimed to have evidence that until 1988 the communists actually considered Sokol an unreliable person who was not an acceptable candidate for cooperation with the regime.

He added that the ŠtB in early 1989 was already predicting the fall of the regime, and that in registering people like Sokol as agents the ŠtB was merely giving itself ammunition to blackmail these people in the future.

"By registering such people the ŠtB was giving itself leverage so that after the change in the regime it would be able to blackmail those people who were expected to have an impact on society," Haľko said.

But professional historians at the ÚPN rejected this argument, and said that it was clear from the ŠtB's own internal records that the agency had no inkling that the communist regime was nearing collapse until late 1989.

The Sme daily also reported that Sokol was registered by the ŠtB as a candidate for secret collaboration for 17 years, an unusually long time given that the ŠtB normally took only a few months to check up on potential agents and confirm or reject them.

Until Sokol's complete file is reconstructed, the only thing that is known about his relationship with the ŠtB is that in 1981 he met with an ŠtB agent in a secret location. This information was found in the file of a priest named Marián Prachar.

At the meeting, Sokol allegedly volunteered information about Prachar to the ŠtB agent.

Sokol has promised to answer the outstanding questions about his past when he recovers, which is expected to be at the end of January.

Ján Kováčik, the spokesman for the Slovak Conference of Bishops, told The Slovak Spectator that during communism "every priest had to cope with ŠtB pressure.

"Yet the absolute majority coped with it in a heroic manner, even at the cost of persecution and jail. That's why it's almost comical today that these former friends are now pointing out even the minor failings of others, while those who supported the ŠtB and created these pressures are enjoying nice pensions, or are active in the business world."