WEEKS after returning from a sojourn in pre-trial custody on extortion charges, entrepreneur Ladislav Rehák says he is putting a For-Sale sign on a pro-opposition weekly he owns, the up-market Týždeň. 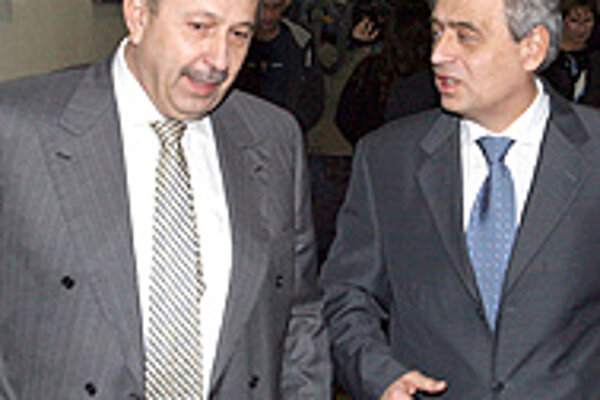 Font size:A-|A+
WEEKS after returning from a sojourn in pre-trial custody on extortion charges, entrepreneur Ladislav Rehák says he is putting a For-Sale sign on a pro-opposition weekly he owns, the up-market Týždeň.

"My aim for a long time has been to fuse the three small publishing houses of which I am the majority owner into a single publishing house," he said for The Slovak Spectator.

Rehák owns W Press, the publisher of Týždeň, along with Star Production, which publishes the weekly Slovenka and the monthly Dorka, and Starpress with the weekly Star and the new monthly La Femme.

"The shareholders of Starpress and Star Production agreed with the fusion, but the editor of Týždeň, Štefan Hríb, as a minority shareholder didn't agree with it. In the past I guaranteed him that I would not do anything against his wishes, so I unable yet to follow through on my design," Rehák said.

"At the same time, the fact that the editor-in-chief of Týždeň refuses to enter into a publishing house that is currently my priority means that Týždeň has ceased to be my priority."

The Slovak Spectator was unable to reach Štefan Hríb for comment.

The Týždeň weekly was launched two years ago at a party heavily attended by the top brass of the Christian Democrats party, now in opposition, and maintains a Christian and conservative bent. It currently sells around 20,000 copies, although Rehák admits this figure fell to 17,000 last December.

With its moral integrity and its sophisticated current events and cultural coverage, Týždeň was never going to be a big advertising draw, as Rehák admitted to the Spex magazine in 2006 when he said "it's never going to make me rich".

However, Rehák projected that the magazine would lose money this year for the third year in a row, which is why he is looking for a new investor for Týždeň.

"I hope that we can find investors who will like the magazine and who will be willing to invest money in it," he said. "In that case I would reduce my majority stake and become one of the minority shareholders. But the future of Týždeň is in the hands of its editor."

The magazine is still carrying debts from its past. Rehák said that although some had already been capitalized, "it still has debts towards its shareholders of Sk4 million. But I and the other shareholders believe that this is a viable project, and that we will manage to cover these debts."

Rehák admitted that it would be difficult to find significant funding for Týždeň, "because it is a weekly, and would have a hard time selling 50,000 copies". Nevertheless, he said he believes that it has a future, because the editorial team and the publishing house are both low-cost in concept.

"The only thing that can endanger Týždeň is if another weekly of similar quality enters the market," Rehák said.

Nora Slišková, the former deputy editor of the Pravda daily, is currently recruiting staff for a new weekly magazine in Slovakia that should emerge in the first half of 2007, and has drawn reporters and editors from both Pravda and the daily Sme. The new weekly is to be published by TV Tip, close to the publishing empire of Ján Kováčik, a minority owner of the Markíza TV station. However, Rehák said he did not believe the new project would present real competition to Týždeň.

Rehák's solution for Týždeň's financial problems is to have it join forces with his more down-market media and to benefit from their advertising revenues, which would also give it a cushion in case a competitor entered the market and cut into Týždeň's sales. "In this case, Týždeň would be financially taken care of thanks to the profits of the yellow press," Rehák said.

Rehák is also co-owner of the easy-listening radio station Jemné Melódie. However, Slovak law forbids fusions between print and radio media, so the station will not be joining the publishing house.

Rehák's print media interests began with Týždeň in late 2004, and continued with the purchases of Slovenka and Dorka, both women's magazines, and the tabloid Star in 2006. The La Femme monthly is just now coming out.

"We've done a lot of work in the last year," Rehák said. "We have four titles that are firmly established on the market, and we stopped the economic slide of Slovenka. Sales of the Star weekly are climbing by 3,000 copies a month, and we're already at 48,000."

However, Rehák's arrest last November 7 for allegedly extorting money from his former accountant (Rehák says the accountant actually embezzled Sk5 million from his companies) cast a shadow over his media successes.

The police raid that netted Rehák and his sons was code-named Svätuškár ("holy roller"). From 2002 to 2006, Rehák was the single largest sponsor of the opposition Christian Democrats party, donating over Sk1.5 million in cash, although the police said the code name had nothing to do with Rehák's political affiliations.

Following his release on the first charges, Rehák was jailed again with attorney Ernest Valko, the former Chief Justice of the Czechoslovak Constitutional Court, on November 15. Again, the charges were extortion, and again, Rehák said he had only been trying to recover money that former business associates had bilked him of.

Due to his run-ins with the law, Rehák gave up his seat as chairman of the board of the Orange mobile operator, which he helped to found in 1996.

Ironically, both Rehák and Valko attended the launch party for Týždeň in December 2004.

Today, Rehák is able to find a little humour in his grim experiences with the police. "When I was brought back to pre-trial custody [on November 15], the warden of the holding centre greeted me by saying: 'Mr Rehák, you must like this place if you're coming back to visit us so soon'."