ON JANUARY 13, the Opera Ball at the Slovak National Theatre in Bratislava officially opened the 2007 ball season. The Opera Ball is regarded as the society event of the year. 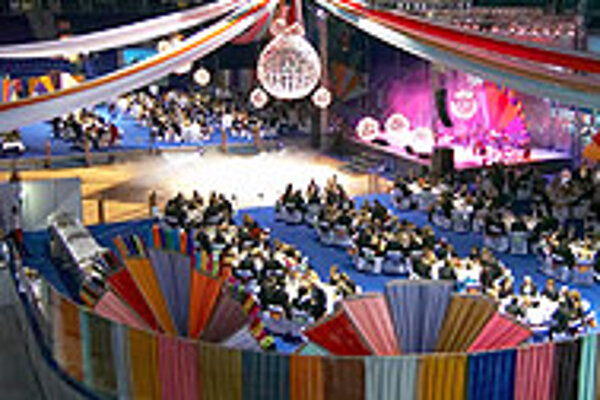 Font size:A-|A+
ON JANUARY 13, the Opera Ball at the Slovak National Theatre in Bratislava officially opened the 2007 ball season. The Opera Ball is regarded as the society event of the year.

Singer Dani Klein from the Belgian band Vaya con Dios ceremonially opened the seventh annual Opera Ball with a symbolic stroke of the gong. A waltz danced by 16 couples and directed by choreographer Ján Ďurovčík was the traditional part opening number. It was followed by performances from tenor Sergej Larin, Czech singer Eva Pilarová and Slovak singers Miro Žbirka and Pavol Habera, among others. Ali Campbell of the British group UB 40 was an unusual addition to the ball, and his reggae made people dance.

TV anchor Jarmila Hargašová opened the ball in a golden dress which symbolized the sun, and later she moderated the event in lilac.

This year, spangles, pears and lace decorated pea-green, turquoise and cyclamen gowns, proving that Slovak women are no longer afraid to wear bright and shining colours.

It took three days and two nights for the SND building to put on its "ball gown". The decoration, built on the concept of the ball of four seasons, included thousands of live flowers and exotic greens as well as four living sculptures which welcomed guests in front of the theatre. About 180 chefs, waiters, barmen and other personnel looked after the partygoers.

At the other end of Slovakia, in Košice, the US Steel Corporation held its 7th ball in the ice hockey stadium, Steel Arena, the same day. There were some doubts as to how the ball would look in the hockey stadium, but in the end about 420 guests were pleasantly surprised. Organizers prepared everything to make all the invited guests feel comfortable.

"We are pleasantly surprised by the decoration of the whole space as well as the atmosphere. It is excellent. We were afraid we might be cold at the ice stadium, but it is too hot here. On the other hand, Košice does not have many places where such a large number of people can gather," ball participants told the SITA news wire.

Building a special floor 70 cm above the ice, ball organizers transformed the stadium, whose ice kept a temperature of -8 Celsius degrees throughout the event, into a ballroom. A spacious dance floor and a stage for the performers occupied the centre of the space. Skillfully installed decorations, draperies and lights managed to transform the space so thoroughly that the attendees did not realize that in fact they were in a stadium.

The attendees included US Steel Corporation President John Surma, many other Americans, representatives of business partners of the steel works, and representatives of the local administration as well as the cultural scene, including renowned tenor and Košice opera director Peter Dvorský.

A charity auction of paintings and artworks created from metal during workshops organized by US Steel Košice was part of the event. The chance to be photographed in an improvised photo studio was another attraction for the attendees.

Many possibilities remain for those who are now in the mood to attend a ball. The ball season will continue with the Orava Ball to be held in PKO (Culture and Leisure Park) on Nábrežie L Svobodu 3 in Bratislava on January 27. The Sme daily will hold its annual ball the same day in the Reduta building of the Slovak Philharmonic at Palackého Street. The Záhorie region will hold its ball at the PKO on February 3. The Bratislava Ball, which takes place in the Reduta on February 10, will be another peak event of the season.