PRIME Minister Robert Fico's go-it-alone approach to foreign policy was on display again in the third week of January after the Cabinet Office apparently got its signals mixed with the Foreign Ministry over a US proposal that Poland and the Czech Republic help set up a regional anti-missile shield. 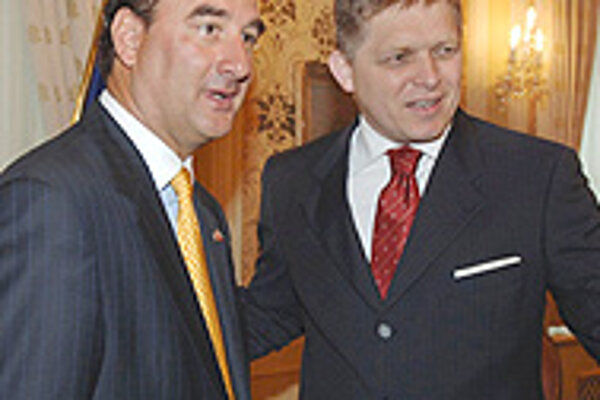 Font size:A-|A+
PRIME Minister Robert Fico's go-it-alone approach to foreign policy was on display again in the third week of January after the Cabinet Office apparently got its signals mixed with the Foreign Ministry over a US proposal that Poland and the Czech Republic help set up a regional anti-missile shield.

The Foreign Ministry under Ján Kubiš responded to the news, announced by Czech PM Mirek Topolánek, by stating that "the US, the Czech Republic and Poland are close allies of Slovakia", and expressing confidence that "all steps that are being taken contribute to greater security in Europe and in the trans-Atlantic environment".

However, when asked how the prime minister viewed the decisions of Slovakia's neighbours and what his view would be if Slovakia were asked to participate, the PM's spokeswoman Silvia Glendová said the prime minister would not comment on the decisions of the Czech and Polish governments, and added: "Robert Fico would find it difficult to agree with the stationing of radar on Slovak territory, if Slovakia were asked".

Fico later said in Prague that "given that I do not regard this system as either a contribution or a detriment to security, I have no reason to agree with it".

Other recent steps by Fico in foreign policy, including planned trips to Libya and Venezuela, have led analysts to suggest Slovak foreign policy is changing direction from the non-confrontational, pro-Western style of the previous government.

In particular, they ask whether Fico's apparent partiality for keeping on good terms with internationally shunned regimes will have any impact on Slovakia's international position as a member of the EU and NATO. Some also fear that the PM's foreign policy might endanger Slovakia's chances of enjoying visa-free travel to the US.

The leaders of Slovakia's opposition parties wrote an open letter to the prime minister on January 22 in which they expressed their "deep concern" over his latest foreign policy steps.

In the letter the leaders of the former ruling Christian Democrats, Slovak Democratic and Christian Union, and Hungarian Coalition Party said that Fico's initiatives pose a threat to Slovakia, which could find itself "degraded from the position of a respected partner to a marginal player in the EU and NATO decision making processes".

Fico's Smer party was suspended last October from the Party of European Socialists for forming a government with the far-right Slovak National Party, denying the PM and his party access to Europe-wide networking opportunities before major EU meetings.

Fico replied to the open letter by saying that "the opposition will not dictate to me what I should do.

"I don't need to go to Strasbourg or Brussels to be petted. If I am to leave the country then it only makes sense that I go somewhere where there are business opportunities," Fico told the TA3 news channel on January 18, referring to his government's policy of linking foreign policy more to economic concerns than in the past.

But the Fico government has given off anti-US signals since it took office, including its decision to withdraw the Slovak unit from Iraq, one of the campaign promises of Fico's Smer party before the general elections in June 2006.

Slovakia started withdrawing its troops from Iraq to Kuwait in mid-January, giving safety concerns as the reason for the manoeuvre.

Most of the 110 Slovak soldiers should be back home by the end of February, while only a dozen professionals are expected to stay in Iraq.

At the same time as the government is withdrawing troops from Iraq and sending mixed signals on the missile defence system, the Slovak ambassador to the United States, Rastislav Káčer, gave an interview for the Pravda daily in which he said that Slovakia, together with several other countries that are under a US visa regime, might see the visa requirement waived within the next year and a half.

The key to the possible lifting of the waiver, Káčer said, is a new bill that the US administration is preparing that will no longer insist that countries have a maximum of 3 percent of visa requests refused before they are allowed to enter visa free.

"The new rules set US security as the highest goal, while the 3 percent criteria, which is more related to illegal labour, will not be an absolute barrier," he said. "Countries that have strong economic growth, where the ratio of refused visas is falling, and that are members of the EU can qualify for an exemption from the 3 percent."

While the US has been at pains to point out that the foreign policy of individual countries is not linked to the decisions that will be taken on the visa waiver, foreign policy analyst Ivo Samson said that Fico's foreign policy initiatives could cause other damage.

"At the moment, ideology is outweighing the constructive pragmatism of the previous government," he said. "Fears that Slovakia would not be able to keep the continuity [of its foreign policy] have come true. The Slovak government is trying to see how far the EU will let it go."