PETRA Zajaková from the United Secondary Alimentary School in Bratislava was deemed to have baked the best Bratislavské rožky (Bratislava rolls) during the Danubius Gastro fair held in the Incheba Exposition Centre between January 18-21. 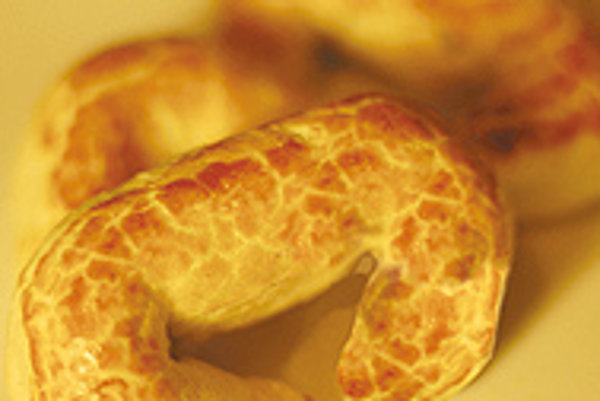 Font size:A-|A+0
PETRA Zajaková from the United Secondary Alimentary School in Bratislava was deemed to have baked the best Bratislavské rožky (Bratislava rolls) during the Danubius Gastro fair held in the Incheba Exposition Centre between January 18-21. Best Bratislava rolls was the main category of the first year of the international competition, along with Most Beautiful Interweaved Product Made from Yeast Dough, which was won by Peter Bartek from the Bageta bakery in Pezinok.

A total of nine three-member teams from the Czech Republic, Hungary and Slovakia enrolled into the competition. Each team had the same 20 ingredients and four hours to show their skills.

The Guild of Bakers and Pastry Cooks (CPC) from western Slovakia organized the competition as a way of reviving the forgotten tradition of the local delicacy - Bratislava rolls stuffed with poppy or walnuts.

The history of these horseshoe-shaped cakes dates back to 1785, when Bratislava, called Prešporok at the time, was the empire's coronation capital and had fewer than 20,000 inhabitants. On December 6 that year, a new product appeared in the window of the Scheirmann bakery that grabbed the attention of passers-by. It was the rolls, then called beugle, which sold out immediately and began a craze that spread to Vienna and Budapest. The Scheirmann bakery flourished and eventually launched a family company.

This product is better known around the world as the Vienna roll, but the head of the Guild of Bakers and Pastry Cooks, Vojtech Szemes, believes historical documents prove that is incorrect, and is leading an effort to get the Bratislavský rožok recognized as a traditional Slovak product by the European Union.

It is quite difficult to find genuine Bratislavské rožky in stores nowadays because they require skilled bakers. The stuffing should make up one half of the whole roll and its surface must be perfectly shiny and marble patterned.