THE MATICA Slovenská national heritage organization, which receives millions of crowns every year in support from the state budget, is allowing its official publication, Matičné Zvesti, to be published and distributed by a far-right group. 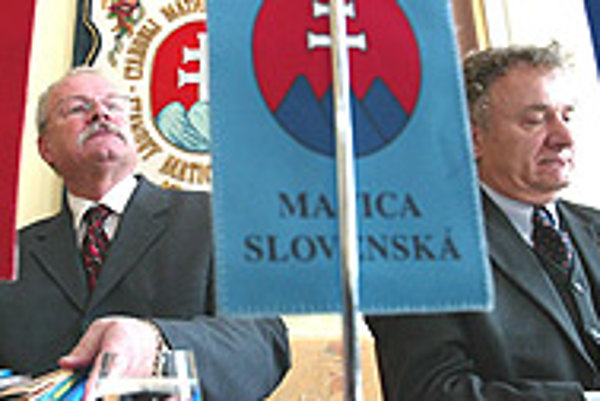 Font size:A-|A+
THE MATICA Slovenská national heritage organization, which receives millions of crowns every year in support from the state budget, is allowing its official publication, Matičné Zvesti, to be published and distributed by a far-right group.

On January 29, the STV public channel reported that Matica Slovenská, which stands for Slovak Association, was no longer publishing Matičné Zvesti (Association News) but was instead issuing it as a supplement in the Právo Národa (Right of the Nation) magazine published by the Slovenské Hnutie Obrody (Slovak Awakening Movement).

Právo Národa, which can also be accessed online at the Matica Slovenská website (www.matica.sk), contains articles that reject the EU, support a pan-Slavic union, lament the death of Slobodan Milosevic while on trial for war crimes in the Hague ("Serbs, be strong!"), and portray the execution of the leaders of the fascist wartime Slovak state (1938 to 1945) as "crimes that have never been truthfully portrayed in Slovak history books".

On the web page it shares with Matica Slovenská, Právo Národa also promotes the Národný Pozorovateľ (National Observer) internet portal, which can also be reached by clicking through from the Slovak Awakening website (www.sho.sk). National Observer contains even more extreme texts, such as a tribute to the artistic talents of Adolf Hitler:

"Hitler offered his artistic creations for sale himself. They were collected by various intellectuals, including Jews. In this manner Hitler earned enough to be able to voluntarily relinquish his orphan's pension in favour of his younger sister Paula. He spent the money he earned on culture - going to the theater, concerts and the opera... Hitler had a deep feeling for art, including painting, music and architecture. In the current era, when even a pile of garbage or human excrement is regarded as art as long as it is produced by a famous name, Hitler's pictures are a strong contrast to this decadence in painting."

The decision to have Matičné Zvesti published as an insert in Práva Národa was made by the Nitra branch of Matica Slovenská. Branch director Drahomíra Pechočiaková, who organized the cooperation with Slovak Awakening, told the SITA news wire that the decision had been taken for financial reasons.

"Matica Slovenská headquarters doesn't finance any of our projects, which leaves everything up to us, and we do what we can," she said. "This is why we hooked up with Slovenské Hnutie Obrody, and reduced the number of pages and the print-run."

Matica Slovenská chairman Jozef Markuš supported the decision, and said he saw no reason that his organization should distance itself from Slovak Awakening.

Právo Národa contains regular articles celebrating the fascist wartime Slovak state, which sent 70,000 of its Jewish citizens to Nazi gas chambers, as well as demands for the Slovak state to be rid of the label of fascism.

Markuš said he saw nothing wrong with this stance, and told STV that he wanted to use the March 14 anniversary of the declaration of the wartime state as an opportunity to "unite people with different opinions".

Despite repeated attempts, The Slovak Spectator was unable to reach any Matica Slovenská representative willing to answer questions on the record.

Although promoting fascism, extremism and xenophobia is a crime in Slovakia, the police do not intend to press charges against Právo Národa or its companion publications. Police spokesman Martin Korch told The Slovak Spectator that historians were divided in their opinions on the wartime state, and that it was thus not possible to take action. "It's basically on the border between ethics and criminal responsibility," he said.

However, historian Dušan Kováč, the deputy chairman of the Slovak Academy of Sciences, disputed this view. "The wartime state was an undemocratic, authoritarian and far-right regime that was responsible for the Holocaust on Jews and Gypsies and for bringing Slovakia into the war against the Allies," he said.

"There is no disagreement about the nature of the state, but whenever someone doesn't want to deal with the issue, they always say that historians are divided, so nothing can be done. However, I never heard the opinion expressed in a serious debate that the wartime Slovak state should be defended. Evaluations of this state remain consistent."

Matica Slovenská describes itself as "an institution that regards protecting the national, cultural and spiritual identity of Slovaks as a priority for Slovak state policy". It is also an institution that respects Jozef Tiso. Historian Milan Ďurica, who works closely with Matica, is even trying to have Tiso, a Catholic priest, beatified by the Vatican.

Peter Bielik of the Anti-Communist Resistance Movement in mid-2005 used the Matica Slovenská portal to cast doubt on the Holocaust. In his article he argued that it was natural that anti-Jewish attitudes arose in Slovakia during the war because Jews were better off than ethnic Slovaks, and would trade in food before the eyes of hungry non-Jewish citizens.

"Non-Jewish children from the poorest families did not have enough money for bread and cried with hunger," he wrote. "Their mothers stood for hours in front of dairy stores and either got very little or no milk at all. But Jewish women got milk with a doctor's prescription. In the same way Jews got 70-80 percent of the available meat, even though they represented only about 10 percent of the population. It was the same with other types of food because of the black market trading that most Jews were involved in. Their public consumption of nuts and chocolate, which non-Jewish citizens could not buy at any price, aroused great resentment. While the others had to work hard for their meagre food and clothing, the Jews were rarely to be seen on public works."

The article was also published on the www.prop.sk server, which Právo Národa also promotes on its web site.

Historian Kováč called it "a scandal" that Matičné Zvesti was being published by Slovak Awakening, even though he conceded the cooperation was natural given the similarity of their opinions.

"It's scandalous because Matica Slovenská is financed from the state budget, and Slovenské Hnutie Obrody is clearly breaking the law [against promoting extremism]."

Since 2000, Matica Slovenská has been a public institution, although under the previous Dzurinda government its funding was cut substantially.

Matica last year received Sk21 million from the Culture Ministry, and earned another Sk23 million from its Neografia printer, which it obtained from the state under the 1994-1998 Mečiar government for a symbolic single crown.

This year, however, thanks to the presence of the far-right Slovak National Party in the coalition, parliament raised the group's funding from the planned Sk16 million to Sk40 million.

"The year 2007 is the first step towards repairing the injustices and discrimination Matica Slovenská has suffered in the past," said Matica spokesman Stanislav Bajaník for the SITA news agency.