PRIME Minister Robert Fico has made it clear that he is planning to hand over the reigns of his ruling Smer party in order to allow him to focus more on his role as prime minister in the years to come. 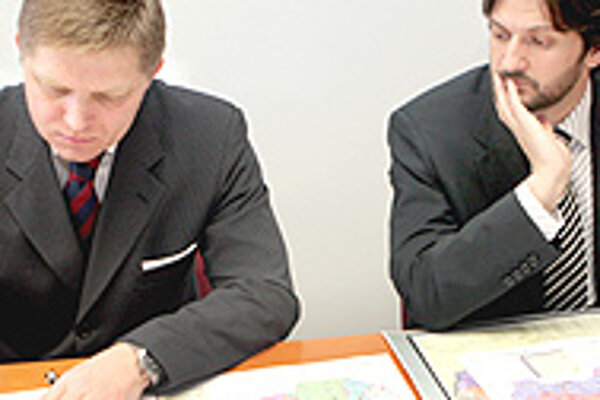 Font size:A-|A+
PRIME Minister Robert Fico has made it clear that he is planning to hand over the reigns of his ruling Smer party in order to allow him to focus more on his role as prime minister in the years to come.

Fico has suggested many times that he does not feel capable of doing two jobs - that of prime minister and party chairman - at the same time, and therefore intends to reliquish the party leadership by the next general elections in 2010.

At Smer's party congress last December, Fico said that a politician who has been active in the government for several years cannot cope with day-to-day party tasks.

He added that his social democratic party does not want to produce "political cadavers", which, he said, is what happens when politicians try to lead both a party and the government.

"I don't want to end up as a political cadaver either," Fico said on December 9.

At the time it was not clear which role Fico was thinking of dropping, but the PM cleared up the confusion on a January 27 talk show on Markíza TV when he admitted that "my government work does not leave me enough time to run the party."

The news that Fico plans to leave his party leadership post did not come as a surprise to everybody. Smer Deputy Chairman Dušan Čaplovič called it "the logical outcome of a situation where he has to give 100 percent to [leading] the government".

What remains unclear, however, is whether Fico is really overwhelmed by his new job as prime minister, or whether he has other motives for leaving the party.

Pavel Haulík, an analyst with the MVK polling agency, said Fico might have taken a lesson from the difficulties that his party's counterpart in the Czech Republic, the opposition social democrat ČSSD, experienced after neglecting regional party structures. In giving up the party leadership, Haulík said, Fico might actually be trying to ensure Smer has a leader with the time and energy to attend to party business.

"In the Czech Republic, the civil democrat ODS party [of PM Jan Topolánek] enjoys a much better position in the regions because of their superior regional structure. I can only speculate that Fico wants to do the same here so that his Smer does not find itself in a similar position as the ČSSD in the Czech Republic," Haulík told The Slovak Spectator.

According to the analyst, Fico will probably be looking for a man to "do his dirty work for him", referring to the difficult and time-consuming tasks that are necessary to build solid party structures, but that are not as glamorous as being prime minister.

On the other hand, Haulík said Fico might also simply have realized that the everyday tasks of party leadership are "simply too much and he was not managing".

Political analyst László Öllös suggested for the Sme daily that "[Fico] may also have wanted to send a signal [to voters] that he is not concentrating all the power in his own hands". Öllös added that even if Fico did give up the party chairman post, it would not detract from his stature and power, as the public would probably continue to see him as the natural leader of Smer.

In Slovakia it has become a tradition for the prime minister also to be the chairman of the strongest government party, with examples including Vladimír Mečiar (1994-1998) and Mikuláš Dzurinda (1998-2006).

According to Haulík, Dzurinda's Slovak Democratic and Christian Union (SDKÚ) should address this issue as well.

"Smer suffers from a desperate lack of capable people in the party. Everyone they had to offer in terms of good personnel had to be nominated to government posts after the general elections. The SDKÚ has the same problem, but they haven't tackled it yet," Haulík said.

If one of these men is chosen to lead Smer, he will likely have to give up his cabinet seat if the party wins the 2010 parliamentary elections. Fico has said the division between party and government posts should apply to cabinet ministers as well as the prime minister.