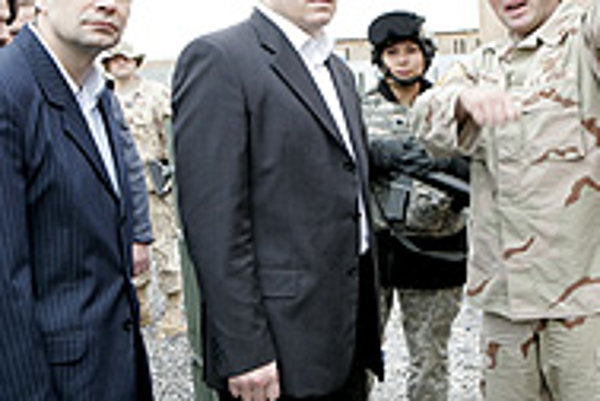 On January 26 they met with Dutch Major-General Ton Van Loon, the head of the UN-mandated International Security Assistance Force (ISAF) Regional Command South, and US Colonel Steve Williams, head of Kandahar airport, to discuss the security situation at the airport, where the Slovak engineering unit in Kabul may be transferred in the months ahead.

"As politicians, we don't want to act blindly, and we were very interested in seeing the conditions that Slovak soldiers would be living in if we finally decide to transfer them to Kandahar," Fico said.

Despite earlier signs that the Slovak government would reject requests by NATO to transfer its troops to the more dangerous Kandahar area to join other NATO forces in securing the country, senior cabinet members have recently seemed to be re-evaluating that policy.

The commander of Slovakia's 57-strong contingent in Afghanistan, Major Tomáš Bobok, recently reported that the Kandahar base is better protected than the base in Kabul where the Slovak engineering unit is currently stationed.

The PM stressed to the ISAF representatives that if moved to the Kandahar base, the engineers would only work on the base premises and not in more remote areas as was originally suggested.

If the government confirms the transfer, the engineering unit will be tasked with repairing the Kandahar airfield and the civilian section of the airport as well as with clearing mines from around the military base.

"We need the Slovak engineers in Kandahar," said the region's political advisor Gajus Scheltema, adding that "I hope I will again have the chance to practice my Slovak."

Kašický is now to organise the details of the transfer, while the government is expected to decide definitively on the issue some time in February.