IMAGINE you're a Slovak living in a large city in the United States or Canada. How would you react if, one evening, a friend turned down your invitation to go for a drink because they were attending dance classes to learn the odzemok? And what if, over the next few weeks, another friend, a colleague at work, and someone you met on the bus all told you the same? 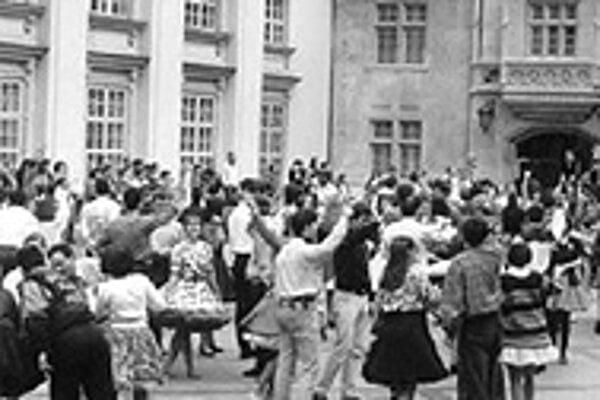 Font size:A-|A+0
IMAGINE you're a Slovak living in a large city in the United States or Canada. How would you react if, one evening, a friend turned down your invitation to go for a drink because they were attending dance classes to learn the odzemok? And what if, over the next few weeks, another friend, a colleague at work, and someone you met on the bus all told you the same?

That look of surprise on your face is exactly the feeling Americans have when they hear Slovaks are learning to square dance.

Like the odzemok, a shepherd's dance popular in western and central Slovakia, square dancing is generally thought of as a folk style limited to gatherings and special occasions in rural farm communities, particularly in mountainous and southern regions of the United States.

But square dancing actually started in the ballrooms of the European aristocracy and among the English Morris dancers. Only in the early 20th century, through the drive and resources of businessman Henry Ford, did it firmly take root in American culture.

According to Jiří Ščobák, a Czech dancer who has been studying square dancing for almost twenty years, the style is still enormously popular in Europe, and is becoming increasingly so in Central Europe.

The Karolina Square Dance Club in Bratislava, which Mr. Ščobák founded in 1994, is the only club in the city that teaches square dancing and round dancing, a style that mixes square dance patterns with Latin steps. With between 40 and 50 members, it is the largest in the country.

"I got hooked on square dancing when I was 18 and living in Prague," Mr. Ščobák said. "I met some dancers from a club in Munich and immediately felt at home. It was the first time in my life I had a lot of friends."

As well as a dancer and instructor, Mr. Ščobák is Slovakia's finest caller - the person who stands on the podium at a square dance and calls out what steps the dancers must make. His passion has taken to him to dance clubs throughout Europe, and earned him standing engagements at clubs throughout Austria.

"Square dancing is a universal language," he said. "Anywhere I travel, I know I can go to a square dance club and find nice people looking to have fun. I can really be myself."

Mr. Ščobák carries this approach wholeheartedly into the halls of the Karolina Club, a simple dance studio located on the premises of a youth centre not far from the Slovak parliament building. The couples range in age and level, and meet once a week to rehearse square dancing's complicated system of steps and patterns. Newer members are encouraged to wear name tags so everyone can get to know them.

"So many couples have gotten married, or even had children, as a result of meeting at the Karolina Club," Mr. Ščobák says with a smile. "Even I met my wife here."

A few times a year, the club holds special square dancing parties, like Hawaii Night, when everyone comes dressed in a costume. The members also often travel to performances together.

"I'm a very, very basic beginner," club president Katarína Benková said, "but I'm president because the people and the dancing are so much fun."

On the occasion this writer observed the lesson, the club was rehearsing for a meeting with the Banská Bystrica square dance club that coming weekend. Like any good teacher, Mr. Ščobák sat silently and observed at first, but soon jumped up to give one couple some individual instruction.

"Square dancing is actually more technical in Europe, where we dance by definition," Mr. Ščobák said, "compared to America, where it's more common to dance by standard position. For example, the "rollaway" calls for the person on the right, whether a man or a woman, to trade positions with their partner by rolling 360 degrees in front of them. But in America, it would always be the woman who rolls away, unless the caller specifically instructs otherwise."

A few more attempts and a bunch of laughs later, and everything at the rehearsal was back in full swing.

After seeing Slovaks square dance, perhaps the next biggest surprise was watching them dance to tunes like Jingle Bell Rock and Don't Be Stupid by Shania Twain, rather than the country music usually played at American square dance gatherings.

"We like to use anything with a good rhythm, then just call square dance moves on top of it," Ščobák said.

Any member who made a wrong turn or fell behind was simply helped and greeted with a kind smile and a laugh.

Though still weeks away, many of the clubs members expressed excitement about the first Sunday in May, when the Club traditionally gets dressed in colorful costumes and dances as a group on Primate Square in Bratislava.

For some people, this is what persuaded them to join the club in the first place.

"I decided to start square dancing five years ago after seeing the club's demonstration on Primate Square," Mária Maderová, a club member, said in between laughs. "I like country music and English, so I wanted to try. It's difficult to remember all the steps, but I really enjoy it!"

For more information about the Karolina Square Dance Club, visit www.karolina.sk or contact Jiří Ščobák at 0903/753-694.