THE SLOVAK NATIONAL THEATRE on Hviezdoslavovo Square resonated with the sounds of folk music rather than opera on January 28 as it hosted a gala celebration for the 80th birthday of Štefan Nosáľ, the artistic director and choreographer of the renowned Slovak folk dance and music ensemble Lúčnica. 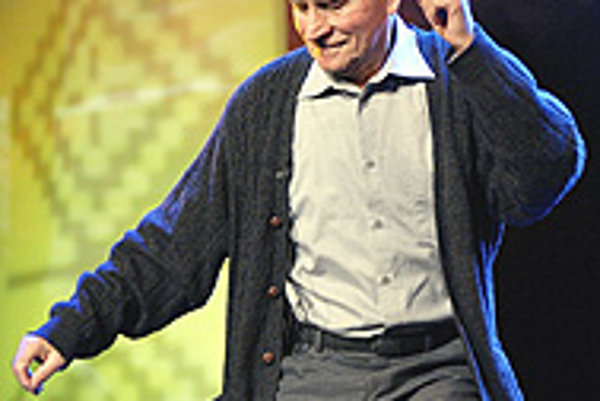 Font size:A-|A+
THE SLOVAK NATIONAL THEATRE on Hviezdoslavovo Square resonated with the sounds of folk music rather than opera on January 28 as it hosted a gala celebration for the 80th birthday of Štefan Nosáľ, the artistic director and choreographer of the renowned Slovak folk dance and music ensemble Lúčnica.

Professor Nosáľ has led the troupe for almost 60 years. Actors Leopold Haverl and Michal Dočolomanský honored him at the event and choreographers Ján Jamriška, Ján Blaho, and Ervín Varga thanked him for the influence and example he has provided over the years.

Many other performers, including Nosáľ himself, appeared on stage. One of them was Nosáľ's student, and director of the event, Ján Ďurovčík, who performed the only non-folk dance of the show, supposedly at the professor's personal request.

The celebration actually consisted of two shows. The evening event was for invited guests only and the afternoon was for the public. Slovak Television will broadcast the show on February 8.

Nosáľ was born on January 20, 1927 in Hriňová, a town in the Podpoľanie region, which is rich in folk tradition. Though his father wanted him to become a doctor, and his mother hoped he'd be a priest, Nosáľ once said it was impossible to escape the lure of folklore. After time as a construction engineer, he finally started a career in folk dancing.

"I'm glad that I have managed to attract young people to folklore and present it in an interesting way," he said.

Nosáľ entered Lúčnica in 1949 and gradually rose through the ranks to become a choreographer, head dancer and artistic director. Many from the artistic community consider his continued success after 60 years to be proof of his extraordinary character.

His aim was has always been to expand folk dancing's artistic and musical traditions beyond the borders of Slovakia.

This is why, under his leadership, Lúčnica has experienced some of its greatest successes abroad. When it debuted in New York in 1994, The New York Times called it the best folk group founded in the former Soviet bloc. Its series of sold-out performances at London's Covent Garden, the only folk dance and music ensemble ever to perform there, was also a major success.

Apart from individual dances, Nosáľ created whole evening programmes for Lúčnica, such as Welcome, Spring, This is Lúčnica, 50 Years of Beauty, and Play and Wedding. And as a professor at the Academy of Music and Performing Arts (VŠMU) in Bratislava, he trained generations of excellent choreographers. Thanks to him and his students, there are 48 children's folk dance and music ensembles in Bratislava alone, and all their members have the same ambition: to, one day, be a part of Lúčnica.