IGOR Králik, the chief justice of the Special Court for political and organized crime cases, will be forced to leave his post on April 1 despite having won two successive job tenders. 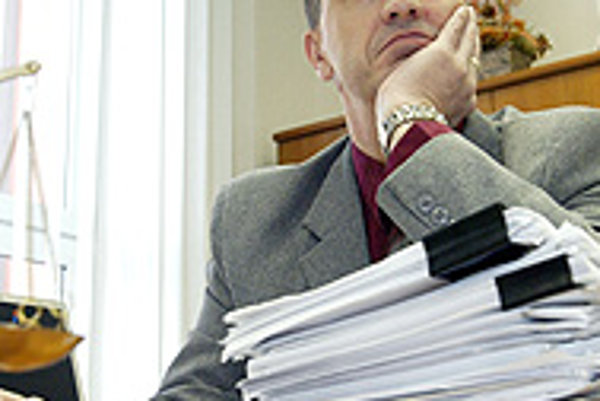 Font size:A-|A+
IGOR Králik, the chief justice of the Special Court for political and organized crime cases, will be forced to leave his post on April 1 despite having won two successive job tenders.

Justice Minister Štefan Harabin, using discretionary powers that allow him to select any of the top three job tender candidates, on February 8 chose justice Michal Truban to replace Králik. Truban, who at the moment is serving as a Special Court justice at the court's Banská Bystrica branch, finished second to Králik in January's repeat tender.

"The law allows me to choose any one of the top three, and the differences between them were minimal," Harabin said.

"It's the minister's right," said Králik for The Slovak Spectator. "He decided in the way he decided."

When the first job tender was held last December, Králik along with Truban and Special Court justices Zdenka Cabanová and Oldřich Kozlík applied for the post of chief justice in order to ensure that the tender produced three winners, and that Harabin would be forced to nominate someone. However, Truban and Kozlík, as the second and third-place finishers, later gave up their candidacies in order to open the way for Králik to be appointed.

But Harabin refused to nominate Králik and called a new tender instead, saying: "This is a strange legal situation, and I need time to reflect, because I really want to act transparently and legally, and I can't afford the suspicion that I prefer Justice Králik, whose qualities I have praised on numerous occasions, and with whom I am on a first-name basis."

Harabin has not always praised Králik's qualities. In August last year, after Králik protested Harabin's decision to send an audit to the Special Court, the minister accused the court boss of politicizing the issue.

"Whoever wants to politicize things and not hold a professional discussion should take off his robes and go into politics," Harabin said of Králik.

Since taking office in July 2006, Harabin has opposed the Special Court as expensive and inefficient, and has several times tried to have it abolished. In December, the ruling Smer party decided that the court would be preserved.

Opposition MP Daniel Lipšic, who helped found the court in 2005 as then-justice minister, told The Slovak Spectator that Harabin was now getting his own back for having lost his campaign to abolish the court.

"This is a low piece of human behaviour flowing from the fact that Harabin lost his fight against the Special Court and the Special Prosecutor's Office," he said.

After taking office, Harabin said that the salaries of court justices should be cut and their workloads increased, as they were producing fewer verdicts than regular system justices.

However, the Special Court under Králik has handed down some important judgements, including the January 30 sentencing of former Rača Mayor Pavol Bielik to five years on corruption charges, the January 10 sentencing of two former pyramid scheme bosses to 11.5 years, and the May 2006 sentencing of gangsters who dissolved the bodies of their victims in acid to terms ranging from 25 years to life.

"The public is familiar with such cases as the acid gang and Devín Banka [whose bankruptcy and subsequent asset-stripping resulted in three murders], in which four special [life sentence] verdicts were issued within one year," Králik told The Slovak Spectator last year.

"These were extremely complicated cases with case files containing tens of thousands of pages. I think we have a right to be proud that these cases were resolved at the Special Court without delays."

Less is known of the work of Truban, who has not been involved in any of the major cases the court has handled since its founding in 2005

According to the Pravda daily, Truban in 2003 convicted the son of union boss Ivan Saktor of stealing a jacket and valuables from a Banská Bystrica bar, but let him off without punishment.

Saktor is a strong supporter of socialist Prime Minister Robert Fico, and last December was elected mayor of Banská Bystrica for Fico's Smer party. He promised to use his central government contacts to rescue the city from decline.

Truban said his decision was based on the fact that Tomáš Saktor was only 17 at the time, had a clean record, confessed to police and made up the damages.

"I categorically deny that my decision was related to the fact that it concerned the son of the leader of the KOZ [union umbrella group]," Truban said. "I acted the same towards his accomplice, even though he was not the son of a well-known individual."